The History of Pokémon TCG in Your Hands!

Posted by Elena from Gaia Storm on 10/29/2021 to Articles
The history of Pokémon TCG in your hands. The value of Celebrations and cards you need to keep an eye on for the Standard format!
“Hey, Elena, this Pokemon Trading Card Game is really cool. You need to try it out. Why don’t I teach you how to play?.”
It was a rainy November afternoon in 2011. It was pretty cool outside, and my friends and I had decided to stay at home when one of them took a deck box from his backpack and showed me his Scizor Prime deck. That was the first time in my life I saw a Pokémon deck and was immediately curious to know more about the mechanics behind the cards. Back then, I was more focused on playing other TCGs like Yu-Gi-Oh! and Pokémon seemed pretty simple in comparison. However, the design of the cards was gorgeous, and the game, I realized soon, was incredibly funny. This is how my journey with Pokémon Card Game began more than a decade ago. Black and White base set got released shortly after, and that’s when I decided to build my own deck and start playing. And what an adventure it has been…
In my time playing Pokémon, I have lived so many things and moments that will forever remain close to my heart: I lived the frustrating Mewtwo EX wars, I saw how Lysandre Trump Card had to be banned in an emergency movement, I saw the power of the GX Pokémon and Zoroark dominating the meta for years, the insane aggression of the Tag Team Pokémon when they were released… and so many more. Every time I look back, I can’t help but smile. This is precisely what the Pokémon TCG last set, Celebrations, is about. The journey that every Pokémon player in the world had with the trading card game. It is about relationships and memories. About all the friends and us we’ve made along the way.
Since Celebrations got released a few weeks ago, I thought it could be a good idea to take a closer look at it and see both the emotional value that the set holds and analyze some of the new cards that could potentially see play in the Standard format. If you need any PTCGL codes you are on the right spot! Po Town has a large selection of PTCGO codes and you can get them emailed to you very quickly! That is being said now let's dig into it!

Celebrations is a commemorative Pokémon TCG set that was released to celebrate that the world discovered Pokémon 25 years ago. It has two differentiated collections within the “classic” and the “standard” one.
The classic collection consists of 25 cards that are not legal for tournament play and that feature the most iconic cards in the history of TCG with a unique 25th stamp on them. You will find here gems like Base Set Charizard, Dark Gyarados, Mewtwo Ex, Mega Rayquaza EX, and many more. If you want to get more details about why certain cards were chosen to be part of this set, you can check the official Pokémon website to see a well-designed timeline where these cards' power is explained.
And then we have the standard collection, so to say. These cards are a combination of different legendary Pokémon (Groudon, Kyogre, Palkia, etc.) or characters (Professor Oak) and can be used in our Standard format right now. All of them also have a special 25th-anniversary stamp on them. While not all of these cards are incredible from a competitive point of view, the thing is that some truly stand out, and that is precisely what we are going to be covering in the next section of the article…

Cards to keep an eye on

Although, as we have already explained, Celebrations aims to connect players with different moments of the TCG history rather than become a competitive set to play with. However, there are some new cards in it that are worth taking a look at as they might be interesting for our current Standard format: 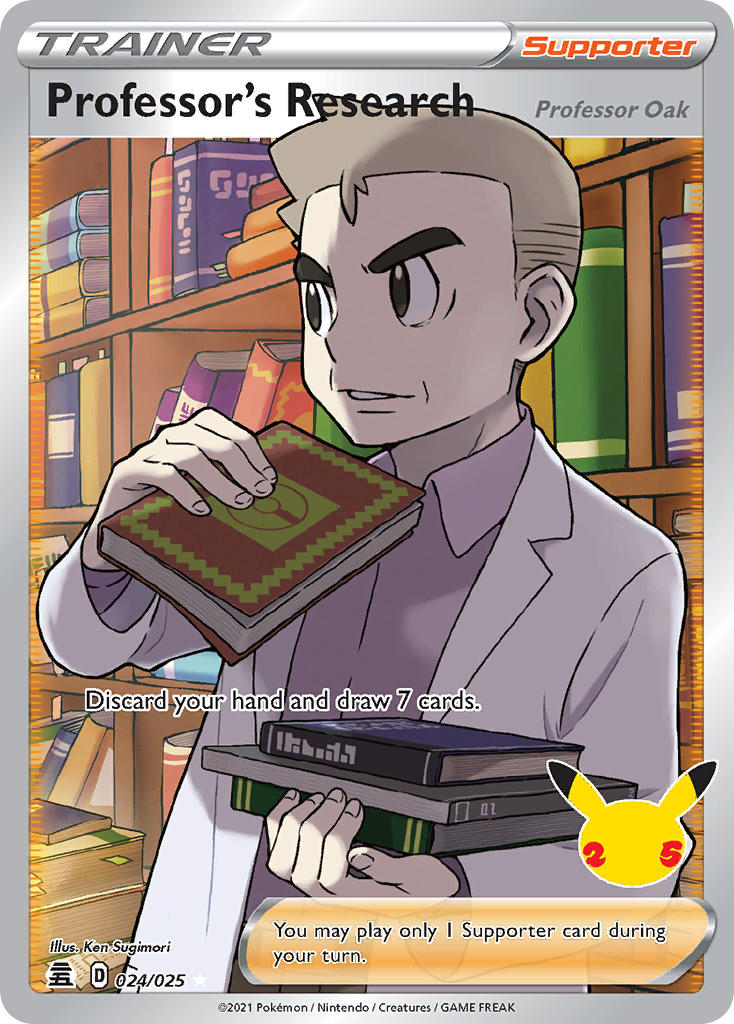 Yes, I know that you are thinking that technically speaking, this is not a new card since we already have Juniper and Magnolia with the exact same effect. But to be honest, Oak is by far my favorite of the three professors and the one with a better Full Art version. The first thing I did when Celebrations was out was to trade some packs to get my Full Art Oak playset, and I couldn’t be happier with how my decks look now. 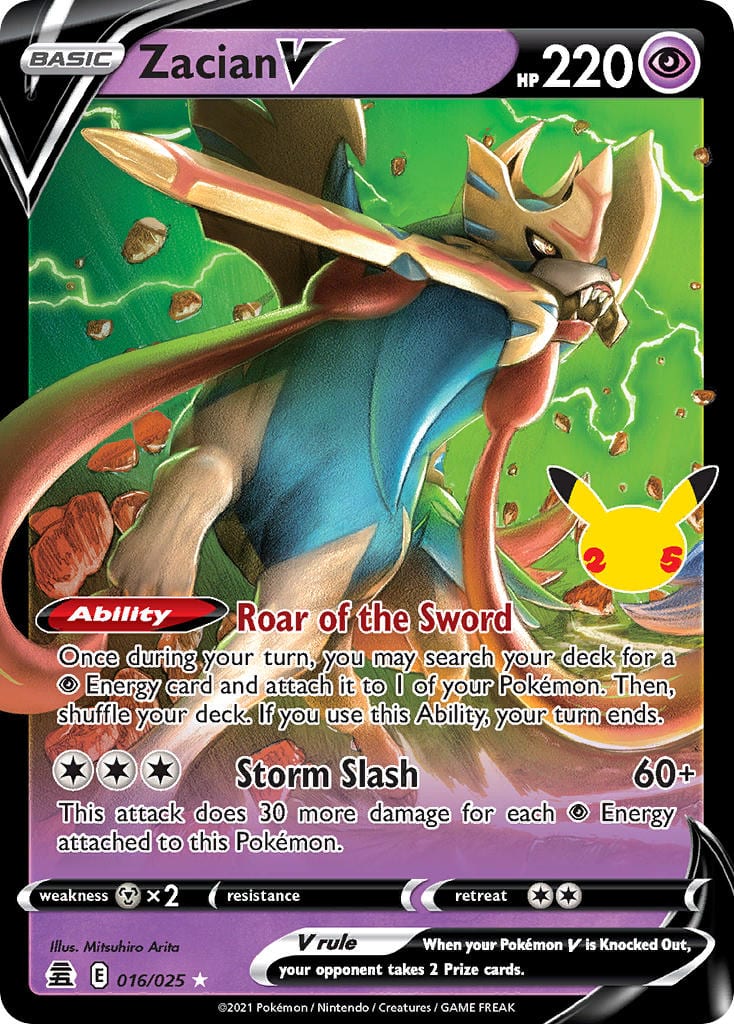 It feels weird to look at a Zacian card that is not metal-type, but this new version of this Sword and Shield Legendary Pokémon is actually quite interesting. To begin with, it has a solid attack that can be a good addition for pure psychic decks like Shadow Rider Calyrex, but what really stands out is its ability to accelerate psychic energies anywhere on the field every turn. This makes Zacian a very good lead Pokémon for decks like Sylveon VMAX, Shadow Rider or even Dragapult! 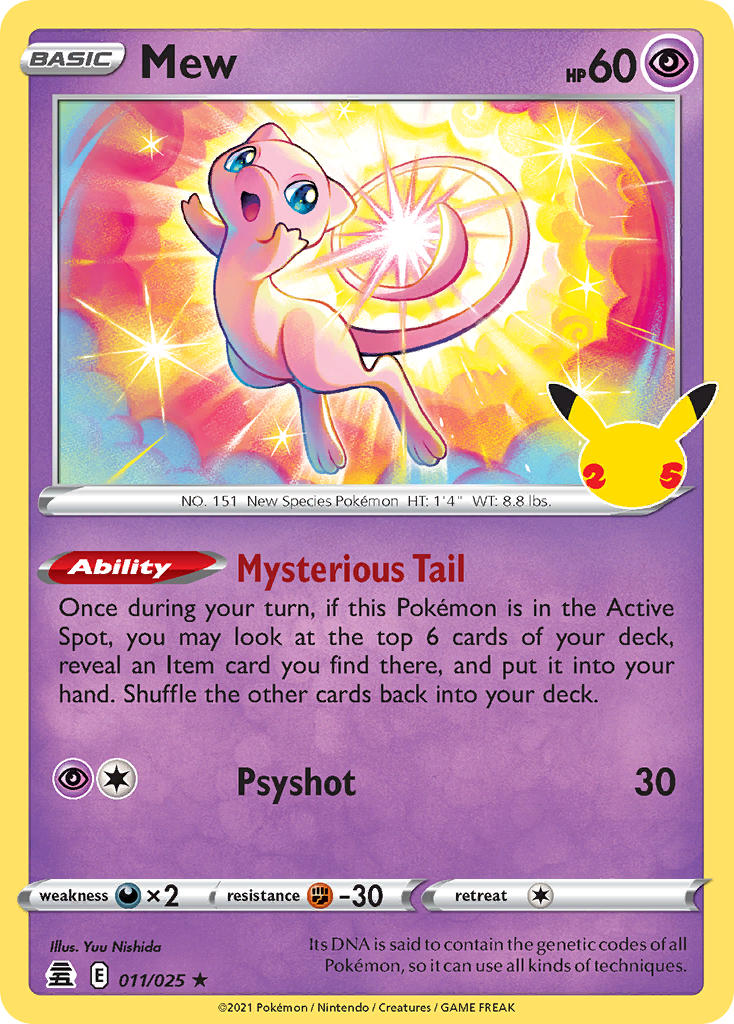 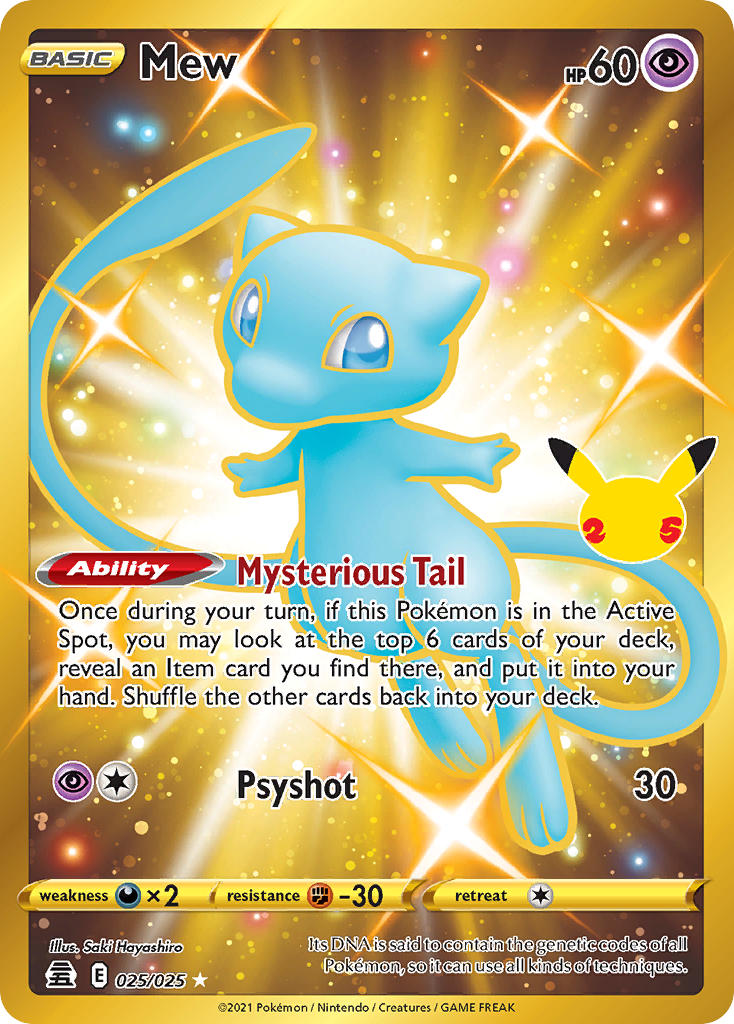 It is impossible to look at Mew without thinking of Jirachi from Team Up. Mew has a very similar effect in the sense that it can help you get cards every turn when in the active spot. I truly think Mew can be a very good addition for combo decks that need to find multiple pieces to work (think of evolution decks and the problems to find rare candy). And unlike Jirachi, it doesn’t go to sleep when you activate its effect so you won’t need to worry about finding switching cards every turn. It is true that right now the Inteleon engine seems to be the rule but I would get my 4 copies of Mew as soon as possible just in case. And not to mention that the shiny Mew version is one of the most beautiful cards I’ve ever seen. 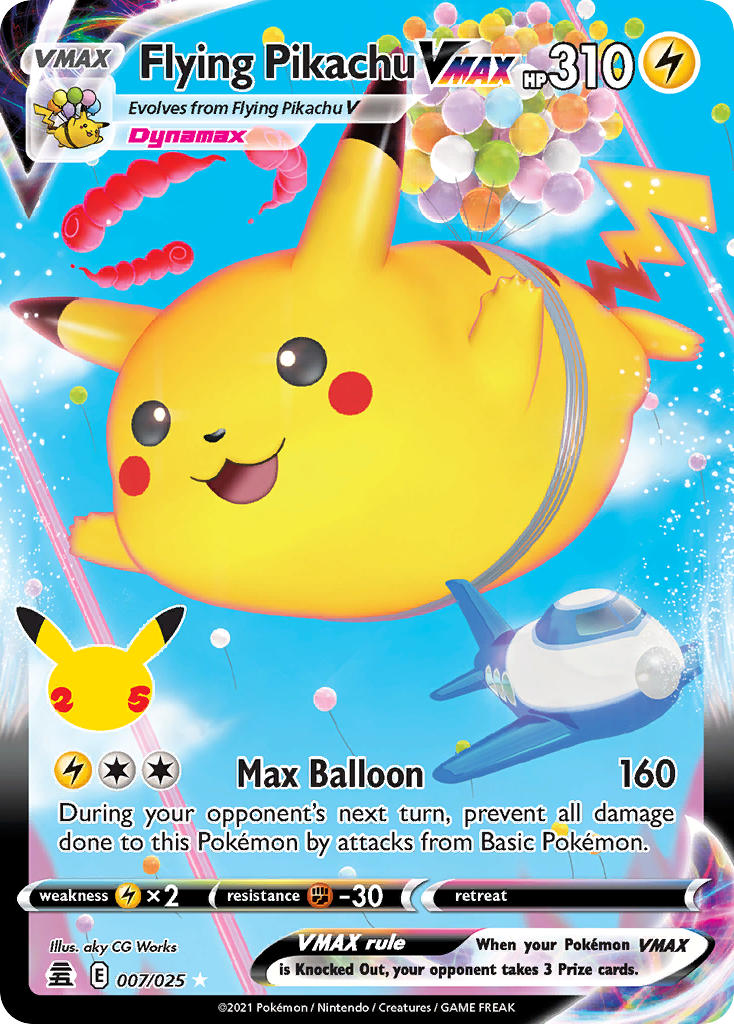 What can possibly be better than a regular Pikachu? Well, a chunkier Pikachu that flies through the air with balloons, of course. That was an easy question. The Flying Pikachu line is actually quite annoying to play against because of its attacks. Pikachu V flips a coin and protects itself from damage when attacked. If you want to maximize the chances of your opponent not being able to touch you, you can combine it with the Glimwood Tangle from Darkness Ablaze. And then, we have Flying Pikachu VMAX that can be damaged by Basic Pokémon so there are entire strategies that won’t be able to lay a finger on you. 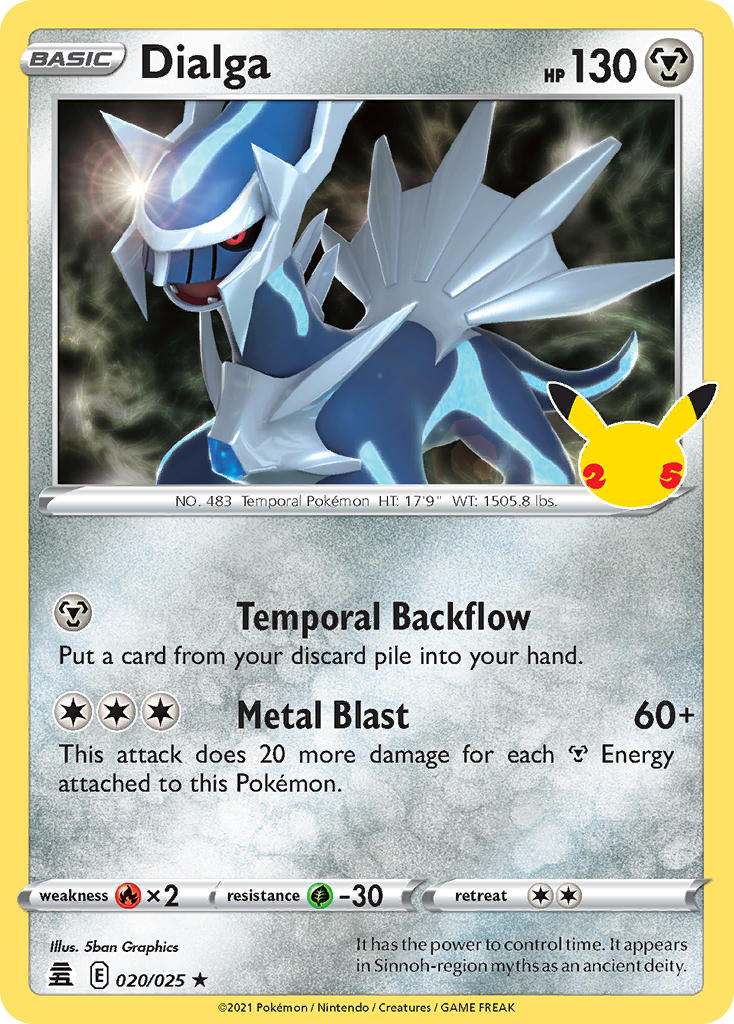 Truth be told, Dialga is a very balanced card and is not the crazy boost that control decks need to become a relevant strategy again but it is a nice help nonetheless. For just one metal energy, it recycles any card from the discard pile and we all know how dangerous that is when combined with cards like Boss Orders or Crushing Hammers. If Dialga survives a few turns and is able to pull off its attack multiple turns, I am sure more than one opponent will directly quit the game. 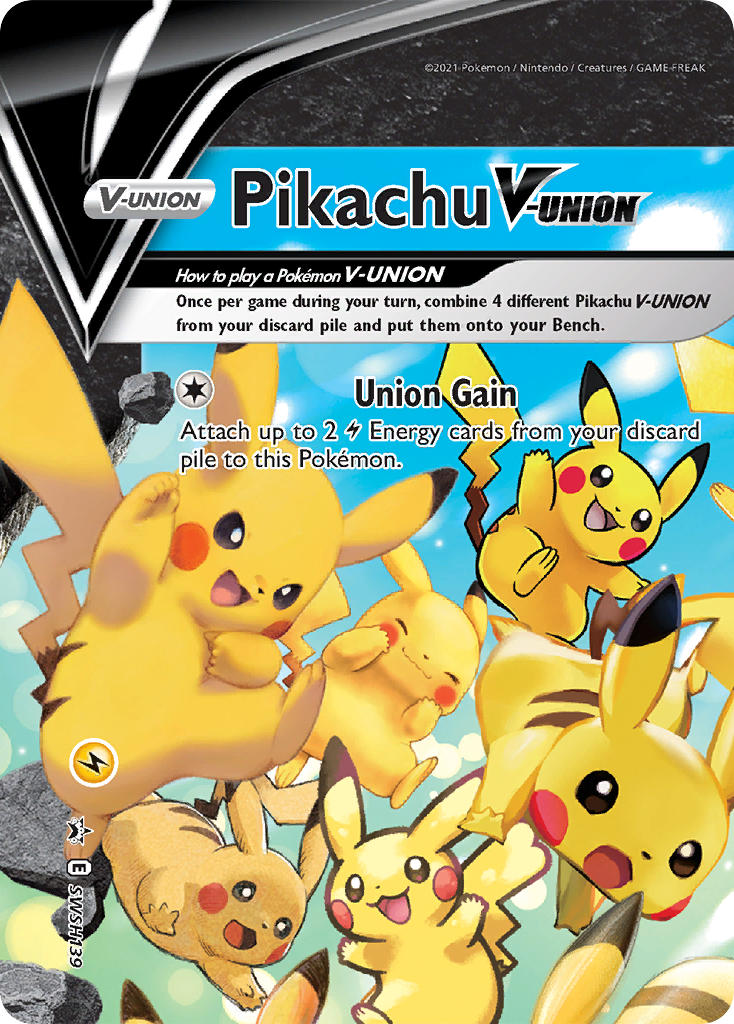 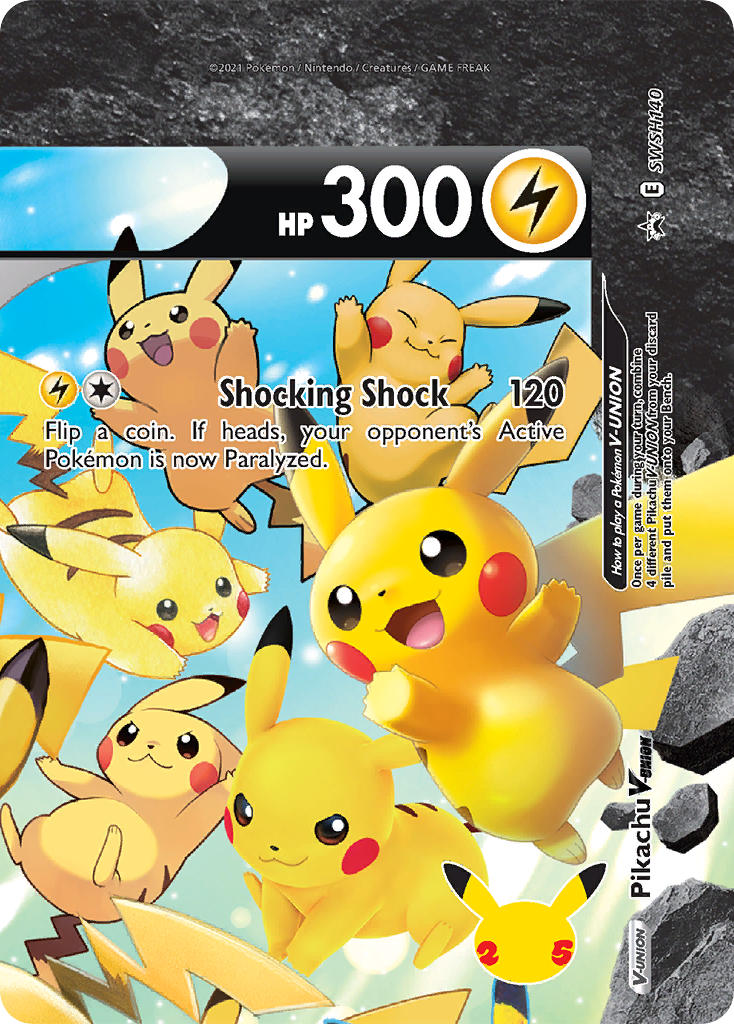 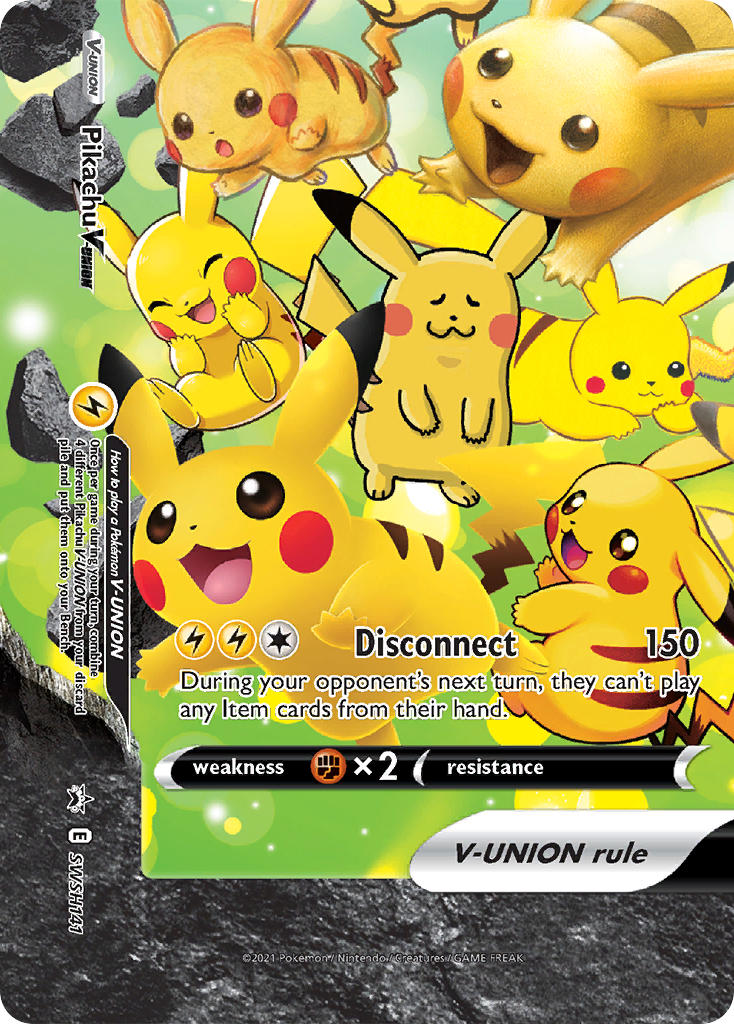 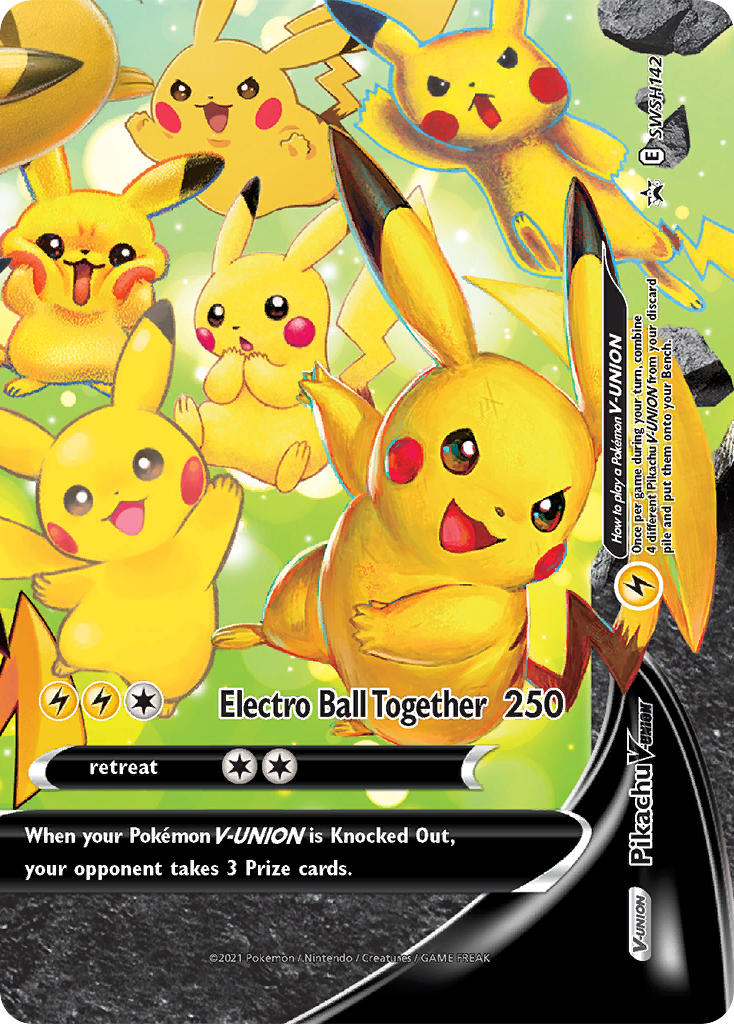 I left my favorite one for the last spot. Pikachu V-Union can only be acquired in a special Celebrations promo box and it is worth every single penny it costs. Pikachu V-Union is probably the most powerful V-Union card of all the ones that have been released until now (Zacian, Greninja, and Mewtwo). Luckily for us, the V-Union mechanic is a bit slow for the standard format because I just don’t want to face a Pokemon that is dealing 150 damage every turn and not letting me play any item cards. Ah, but Expanded? That’s a different story. Pair Pikachu V-Union with Electropowers, Thunder Mountain, Battle Compressor and see how many turns your opponent is able to play before scooping.

Whether you are looking to rekindle the early years when you started playing the Pokémon TCG or want to open some of the most iconic cards in the history of this game, Celebrations is a set that you will really love. Apart from being able to pull stunning classic cards like Charizard or Pikachu from Base Set, Celebrations also comes with some very interesting new additions for the Standard format. If you are looking to get some PTCGO codes for your account, remember you can do so here at PoTown and start testing new strategies. Thanks so much for reading and who knows, maybe we will be celebrating the 30th anniversary some years from now… 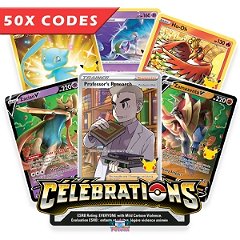 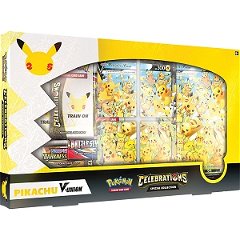