What’s poppin’ Po Town readers? It’s your boy Zach Lesage, and I’m here to share some super fun decks from Fusion Strike! Fusion Strike is our newest set for the Pokemon TCG, and it contains the new Fusion Strike mechanic. More or less, it is another subset of cards, like Single Strike or Rapid Strike, and it allows some cards to work exclusively with each other. While many other content creators want to dive into the heavy hitters like Mew VMAX (Fusion Strike), Genesect V (Fusion Strike), and Inteleon VMAX (Fusion Strike), I have a different idea. I’m sure our other content creators (or even myself in future articles) will keep you covered. This article will share some of the more fun ideas that I’ve come up with from my testing. While these decks might not win the next Late Night Series event, they bring me back to my roots as a player who loves to see unique concepts! If you want to try any of these ideas out or grow your Pokemon TCG Online collection, be sure to pick up some PTCGO codes right here from Po Town! As a bonus, I’ll include my competitive “buy list” of cards so that if you aren’t interested in these fun concepts, you can quickly know the most playable cards from this set. Let’s jump into it! 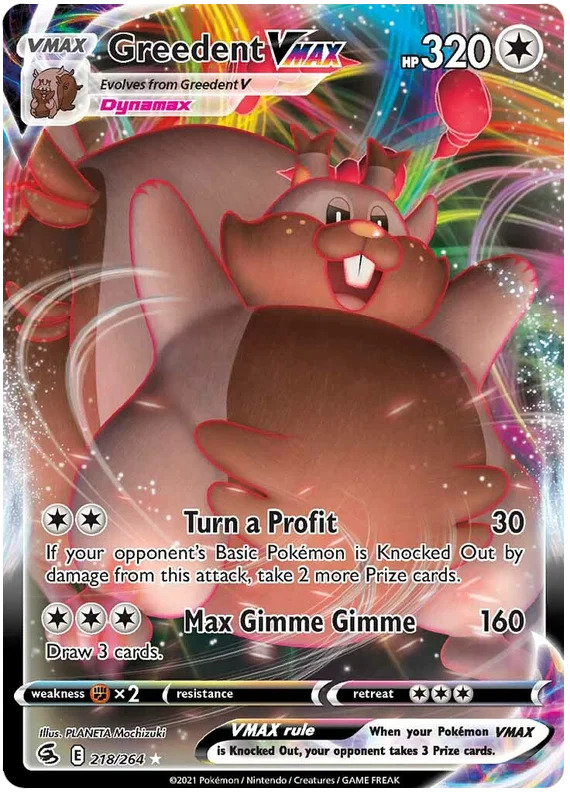 Upon the first glance of Greedent VMAX (Fusion Strike), it seems like it is the long lost cousin of Arceus & Dialga & Palkia-GX (Cosmic Eclipse). Not in any funny way or resemblance to shape-shifting / time-warping Dragon compared to a fluffy rodent Pokemon, but in the way how each card has a mechanic to draw extra Prize Cards. While Greedent VMAX will likely never live up to the menacing use of Altered Creation GX, this deck aims to use Big Stock in a similar way! You need to know a few specifics first: Big Stock only does 30 damage, and it only draws extra Prize Cards from Basic Pokemon when it Knocks them Out. I’ve thought of creative ways to use Powerful Colorless Energy (Darkness Ablaze) and Sponge Gloves (Fusion Strike) to use against Sobble (Chilling Reign), but I ultimately decided on Inteleon (Chilling Reign) to add extra Damage Counters. It allows this deck to use the underutilized Toy Catcher (Evolving Skies) to bring up weakened Basic Pokemon to abuse with Big Stock. Galarian Cursola (Fusion Strike) is the other unique way to abuse Big Stock, and that's because it has its Forced Revival attack! That attack allows you to bring back a Basic Pokemon V from your opponents Discard Pile to their Bench and put Damage Counters on it until its remaining HP is 30. That works wonderfully with Big Stock and Toy Catcher to draw your remaining few Prize Cards. Whether it's a meme or not, Big Stock is an awesome attack, so be sure to test it out! 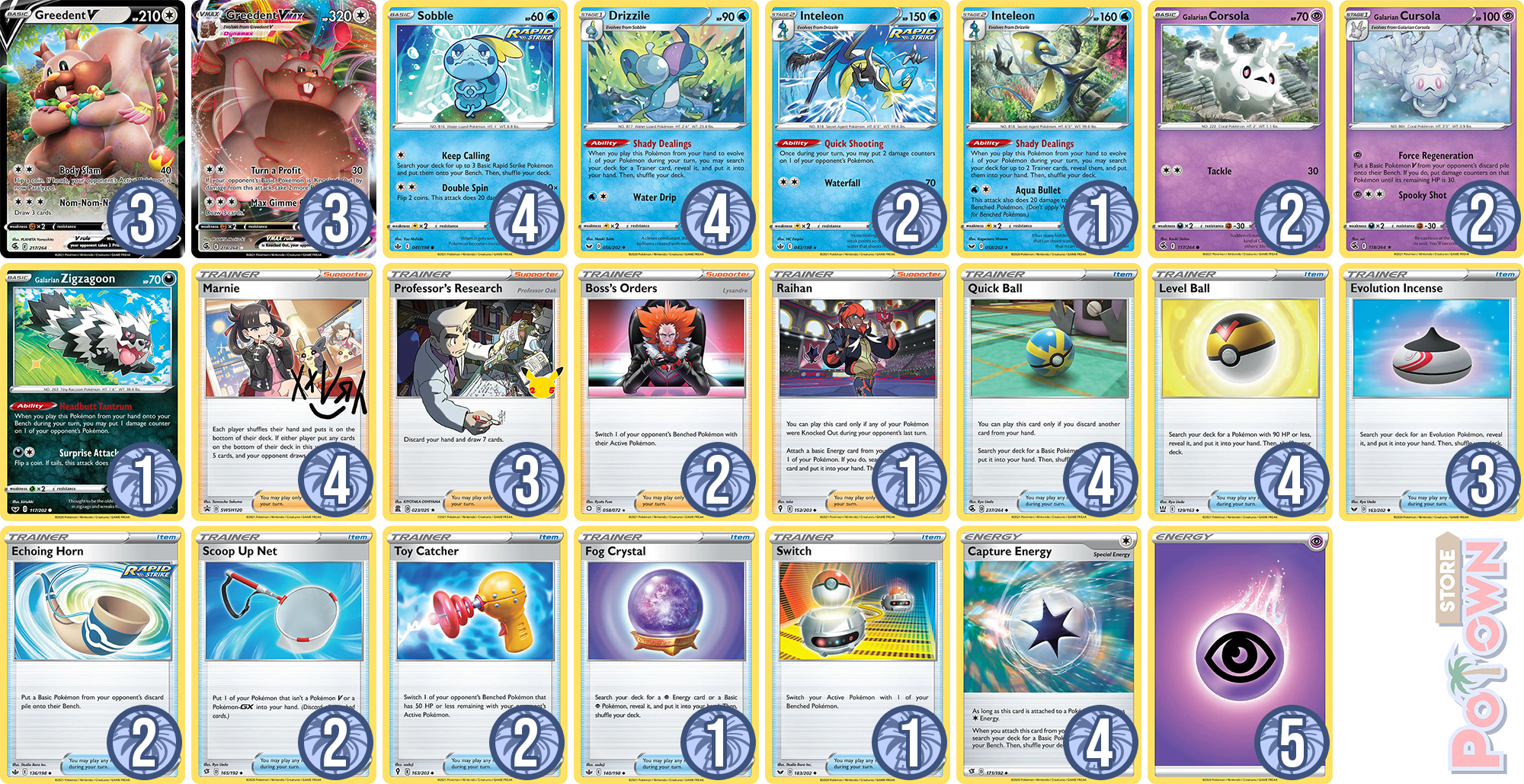 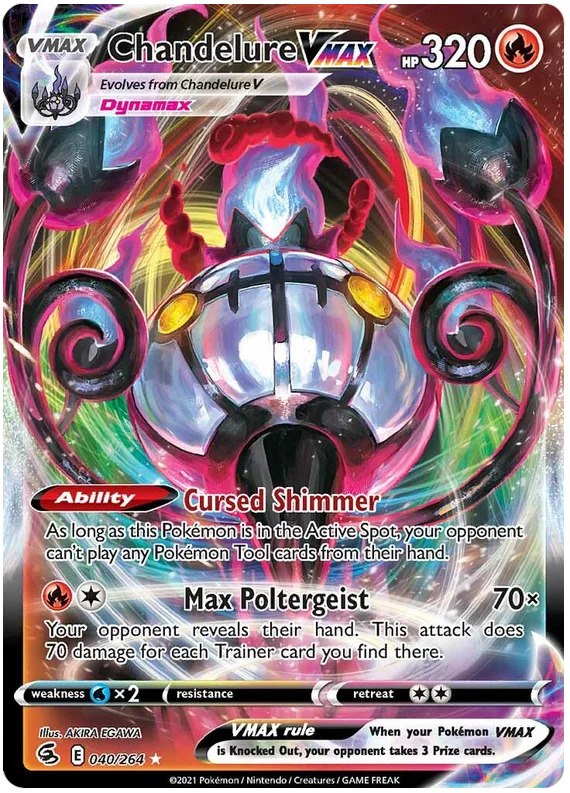 When looking at Chandelure VMAX (Fusion Strike), it resembles the powerful Gengar & Mimikyu-GX (Team Up) that dominated the end of our last format! Max Poltergeist can actually hit for more, and your opponent has to carefully choose when to play cards or to hold on to them. The biggest issue with this deck is that very few cards alter your opponent's hand in your favor, but it seems fun to try and make it work! Marnie (Sword and Shield) has long been one of the best choices, and you have the chance to force your opponent into drawing into 280 damage worth of damage! If you hit that gigantic number, Inteleon can finish off the rest with Quick Shooting. Judge (Fusion Strike) seems to be the only other Trainer that can jumble things up and give you the chance to hit for a lot of damage. Rotom Drone (Vivid Voltage) gets a chance to shine because you can peep into your opponent’s hand to see how much you’re gonna hit for before you decide if Marnie or Judge is worth it. If your opponent plays well, this deck might fail miserably, but I do like how Chandelure VMAX forces you to play differently. 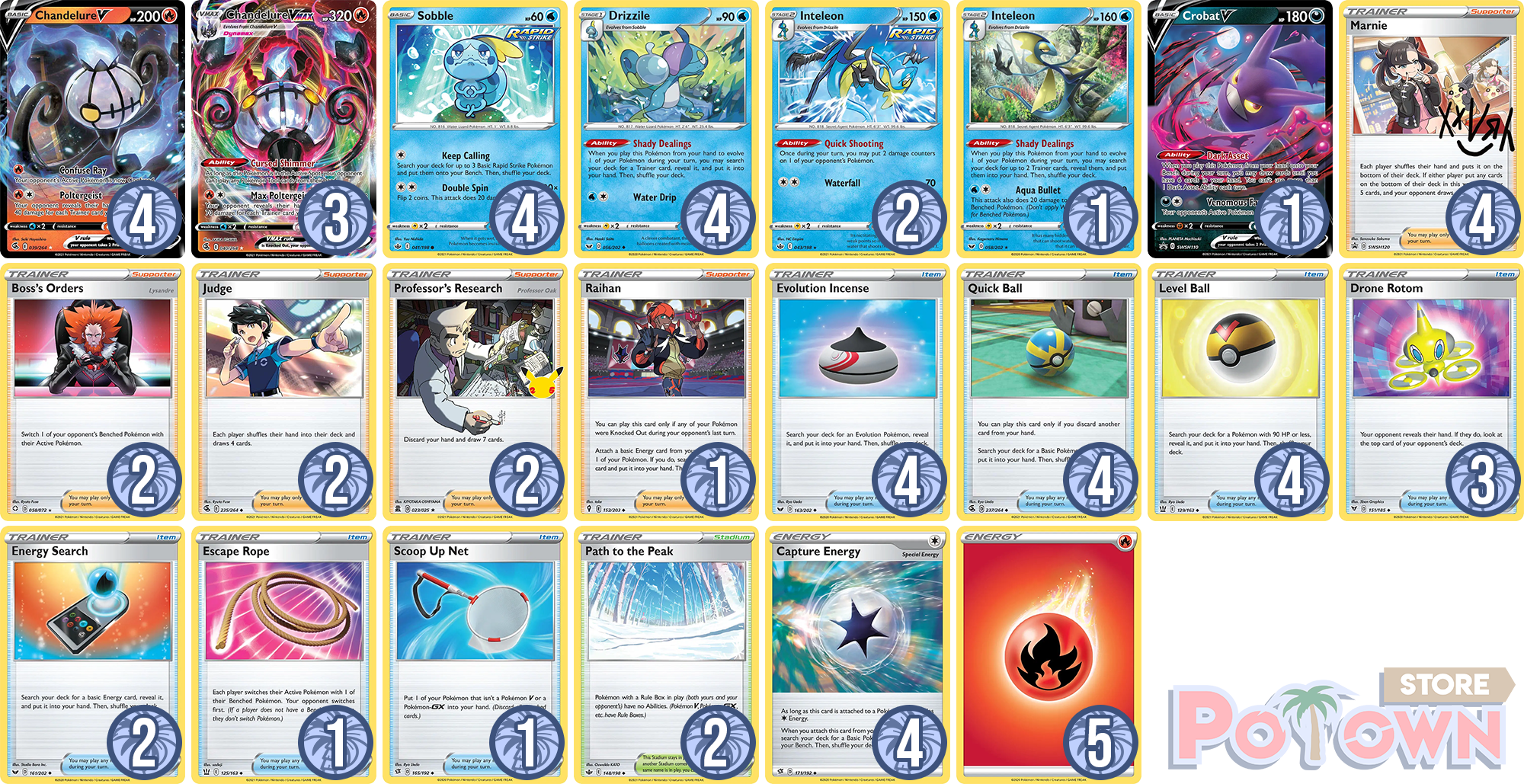 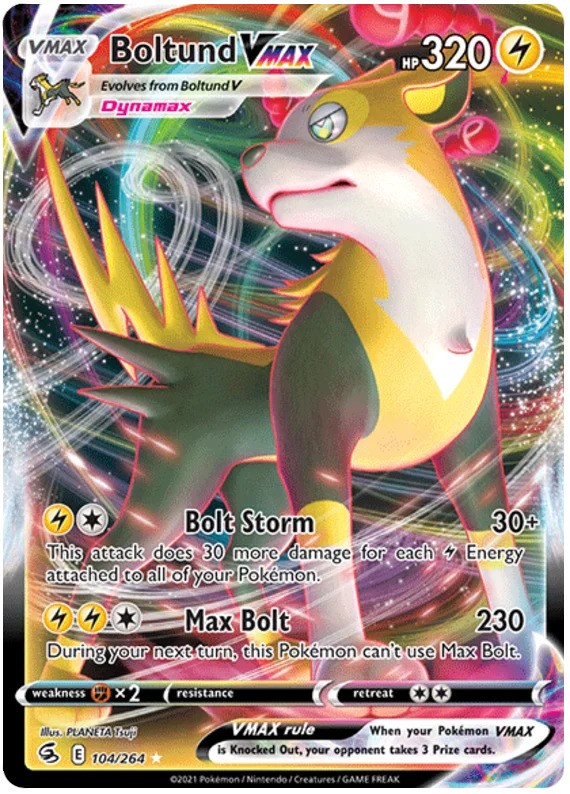 My dreams of Boltund V (Rebel Clash) becoming a real deck are finally coming true from the unexpected release of Boltund VMAX (Fusion Strike). While Bolt Storm is extremely similar to what Boltund V was already working with, you get a slight damage output boost and you get a tremendous amount of an HP boost. Pairing that with Speed Lightning Energy (Rebel Clash) to have a better draw engine and Flaaffy (Evolving Skies) to accelerate Energy makes this a competitively sound concept! Stormy Mountains (Evolving Skies) makes this deck incredibly consistent and this might actually be one of the better performing archetypes coming out of Fusion Strike. It gives me Blacephon-GX (Lost Thunder) / Naganadel (Lost Thunder) vibes and those are some of the Pokemon online decks that I like playing the most! As long as Single Strike Urshifu VMAX (Battle Styles) take a step back due to GengarVMAX (Fusion Strike) getting released, this deck can truly run! 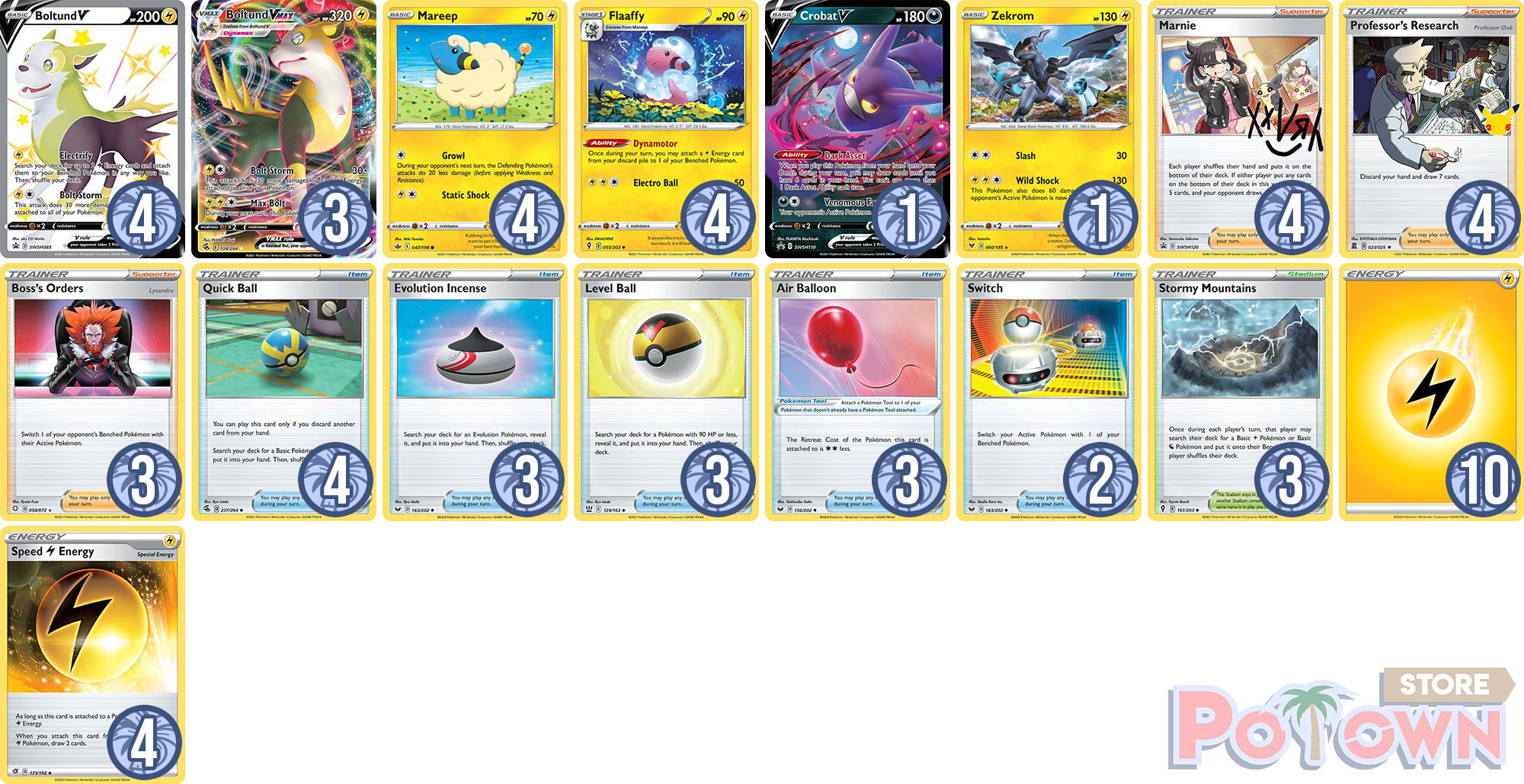 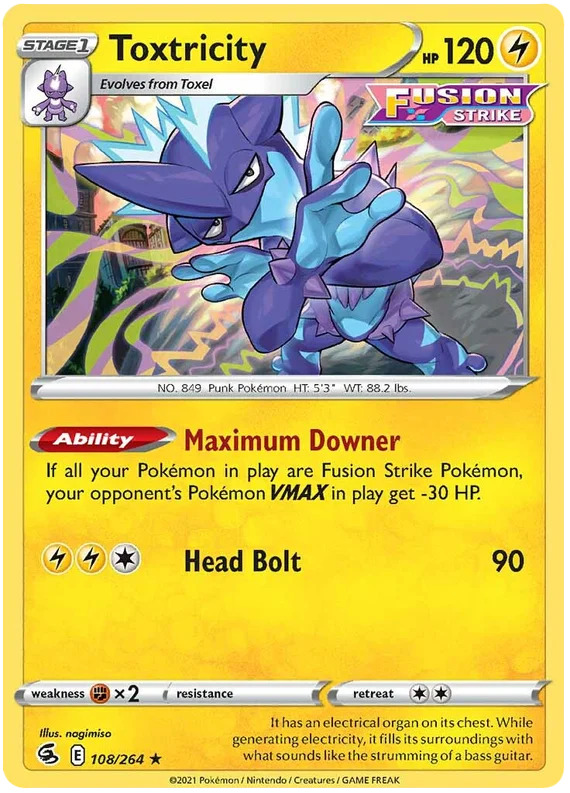 I usually let players choose what cards to pick up from each set, but I got ahead of myself so these are the cards that I plan on grabbing for myself. I do want to note that the fun cards featured in this article aren’t on this list, but that doesn’t mean you shouldn’t pick them up if you want to experiment with these cool concepts. My must-haves is more or less a bare-bones list of the cards that seem to have staying power in the format for months to come! For all I know, Boltund VMAX is the best deck in format once we receive our next set, but my 15 years of experience tells me it’s more or less a fun deck. Hopefully, this list helps you understand the core of Fusion Strike and makes your life a bit easier. Let’s jump into it!

I hope that you enjoyed reading about these new fun concepts and hopefully you get a chance to test them out yourself! While I pride myself on being one of the top players globally, I still like to get my hands dirty and test with some of these fun concepts! While fun concepts aren’t the best to bring to global competitions, some strategies found within these decks teach you how to find unique paths to winning games - an asset that many players overlook. The same way that a Pidgeotto (Team Up) Control deck focuses on milling resources from your opponent’s deck, Chandelure VMAX’s Max Poltergeist causes you to focus on increasing the amount of Trainer cards your opponent has in hand. What I’m trying to say is that testing different strategies will inevitably cause you to grow as a player and learn more about this complex game of Pokemon TCG. I plan on testing all of these with my friends and teammates as much as possible to take a break from grinding Mew VMAX! Remember, winning is only one aspect of the game, but the fun we share is an amazing experience. If you need any of the cards in this article or from my buy list, be sure to pick up some PTCGL codes from Po Town to get what you need. As for me, I’ll be chillin’ and having fun! Until next time…

Zach Lesage is a contributing writer for PoTown store. As a Toronto local, he has been playing the Pokemon Trading Card Game since 2005 and creates Pokemon content as his full time career. As Zach Lesage PTCG, he creates YouTube content, streams on Twitch, and provides hot takes on his Twitter. With multiple prestigious accomplishments in the game, such as the 2020 Players Cup 2 Champion and the 2020 Oceania International Championships Finalist, he has proven his success in the game. Outside of the game, he travels the world, enjoys the culture of designer streetwear, and is a professionally trained chef. You can catch him at most Pokemon events and follow him on Twitter @ZachLesagePTCG.
SHARE THIS POST
Previous Post
Next Post 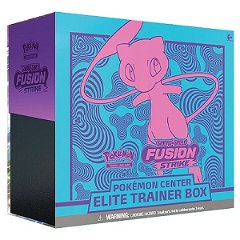