Posted by Elena from Gaia Storm on 12/10/2021 to Deck Lists
Hello everyone! This is Elena from Gaia Storm TCG and I couldn’t be more excited to be here once again in PoTown Store. Today we are going to be covering one of the most incredible and complete products you can get your hands on to start playing Pokémon TCG with the best results from day one: the new Single and Rapid Strike League Battle Decks.
No matter if you are a trainer that is going to start his or her Pokémon adventure or an experienced player that wants to come back without expending all your monthly salary on a new deck, Battle League Decks are the perfect way to do so. These products focus on offering players a very cheap way of obtaining powerful Pokémon and not only do they include many good staple cards (i.e. cards you run in all the decks in the format because of the consistency they provide) but also come with a ready-to-play 60 cards deck that has a lot of synergies. In the past, we have very cool products of this line like Arceus Palkia Dialga Tag Team & Zacian and Inteleon VMAX and it seems that 2021 is ending with two new contenders that are none other than the two Urshifu variants that have been dominating the metagame since their release: Rapid Strike Urshifu V and Single Strike Urshifu V.
As such, the objective of this series of articles is going to be to guide you in improving the content of these two pokemon online decks, taking them from a somehow “decent” stage to the most powerful version possible. We will also be looking at how to effectively play them with a dedicated youtube video so don’t forget to check PoTown Store’s Youtube channel to get the complete picture. Having said that, let’s get started and analyze the first of the decks: Rapid Strike Urshifu!.

Rapid Strike Urshifu Battle League Deck. What can you expect from the product? 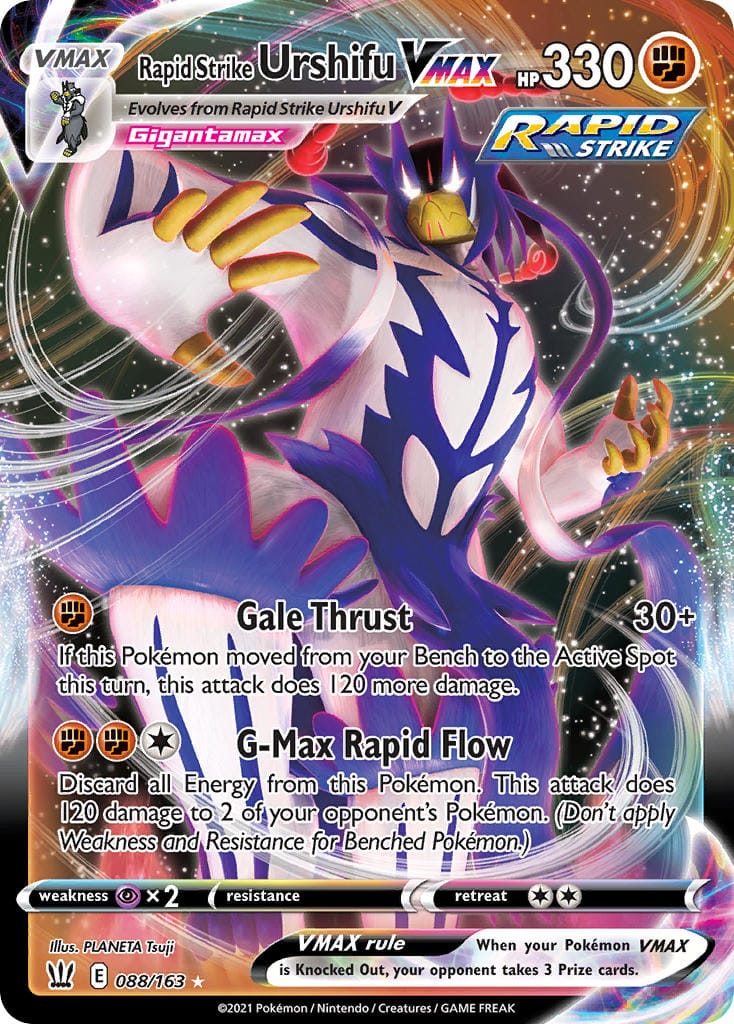 That is probably the first question you have in mind right now and it is a very reasonable one. Is it worth buying this? The answer is Yes! This product comes with a very consistent Rapid Strike Urshifu deckthat will already give you much better chances of competing than any of the other pre-constructed decks you can obtain right now. Just analyzing its content from a purely financial perspective, the value that it has if you add up the individual costs of every card is way higher than if you try to get each of them separately.
This is the list you will find inside the product: 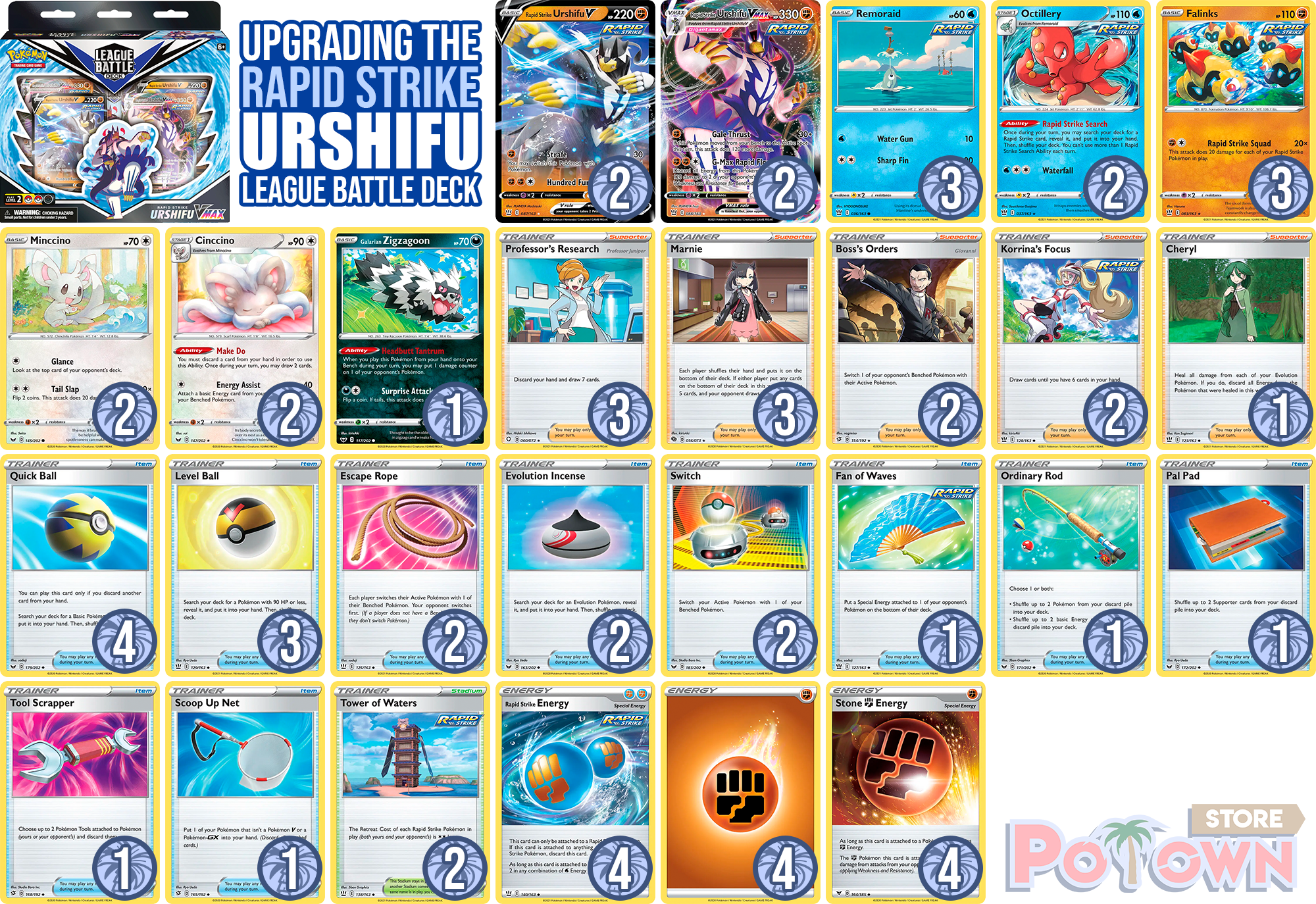 Rapid Strike Urshifu is the main star of the deck and all the cards that are here are focused on helping Urshifu deal massive amounts of damage turn after turn. It is very welcoming to see that just by purchasing this product you are already getting a solid 2-2 line of Urshifu, giving you immediate access to one of the most powerful V cards of the game. When it moves to the active spot from the bench, Urshifu is able to hit for 150 damage and if you discard 3 energies you can choose 2 Pokémon anywhere on the field and deal 120 to each of them. In fact, those two attacks alone are so powerful and require so little to function that has prompted Urshifu to be a very popular choice since it was first released in Battle Styles, more than 6 months ago.
There are two main evolution Pokémon that will help you continuously promote your Urshifu onto the active position and find the resources you need: Cinccino and Octillery. Cinccino offers you a very nice draw support every turn at the cost of discarding cards from your hand while Octillery will give you any card from the Rapid Strike archetype, providing you with a ton of outs no matter the situation you are in (remember that 50% of the cards you are running here are Rapid Strike ones!). Once you set up a couple of Cinccino and an Octillery on the field, it will be very easy to always access your resources.
But not only Pokémon are great, but the deck also comes with a very good list of staple cards that are important for every strategy like Quick and Level Ball or supporters like Boss Orders, Professors Research and Marnie. This is going to help you move your Urshifu around the field and deal damage to your opponent’s benched Pokémon.

Upgrading the Battle League Deck in a phased approach

Now that we know the contents, it is time for our next step: improving the decklist. I think it is always good to approach this in a gradual way so I am going to propose that you first reuse as much as you can while focusing on consistency and then move into a final and more rounded deck. I mean, this is Pokémon after all and everything is about continuous evolution, isn’t it?
With this in mind, these are the first round of changes we are going to be making:

So, in the end, this is how the final updated deck (Budget version) would end up looking like: 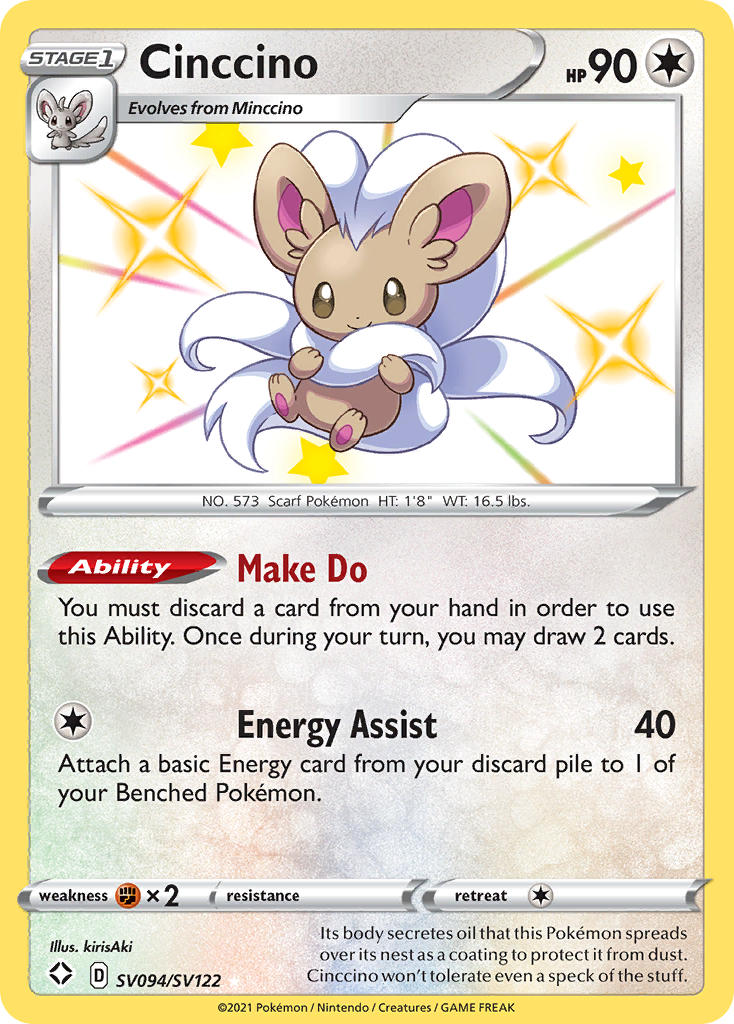 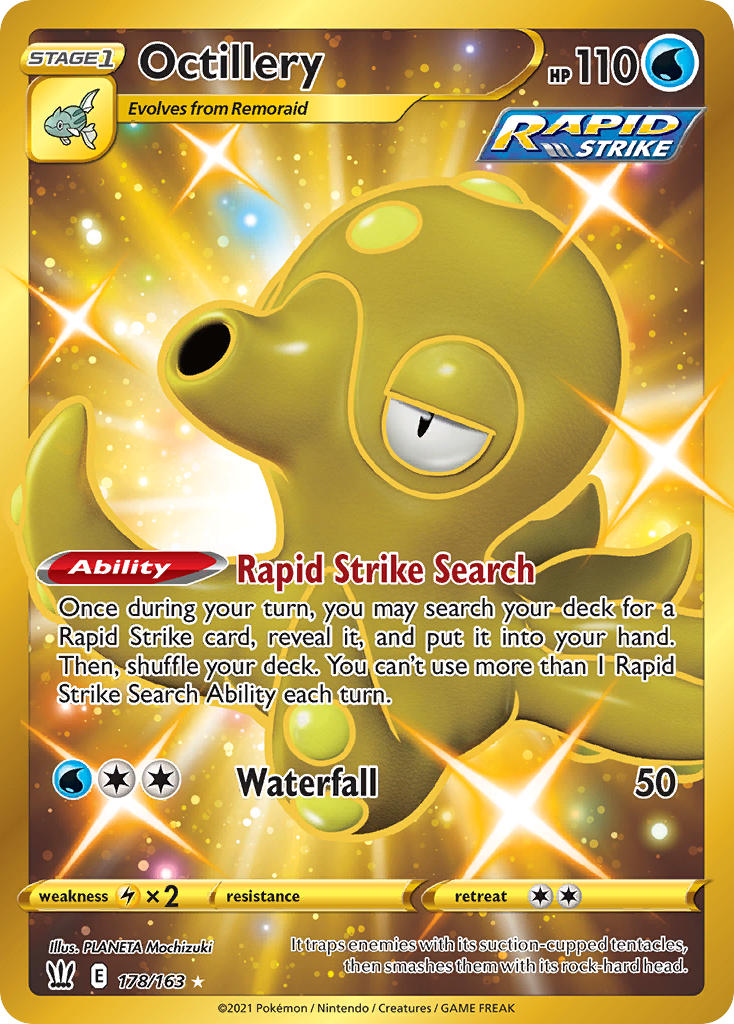 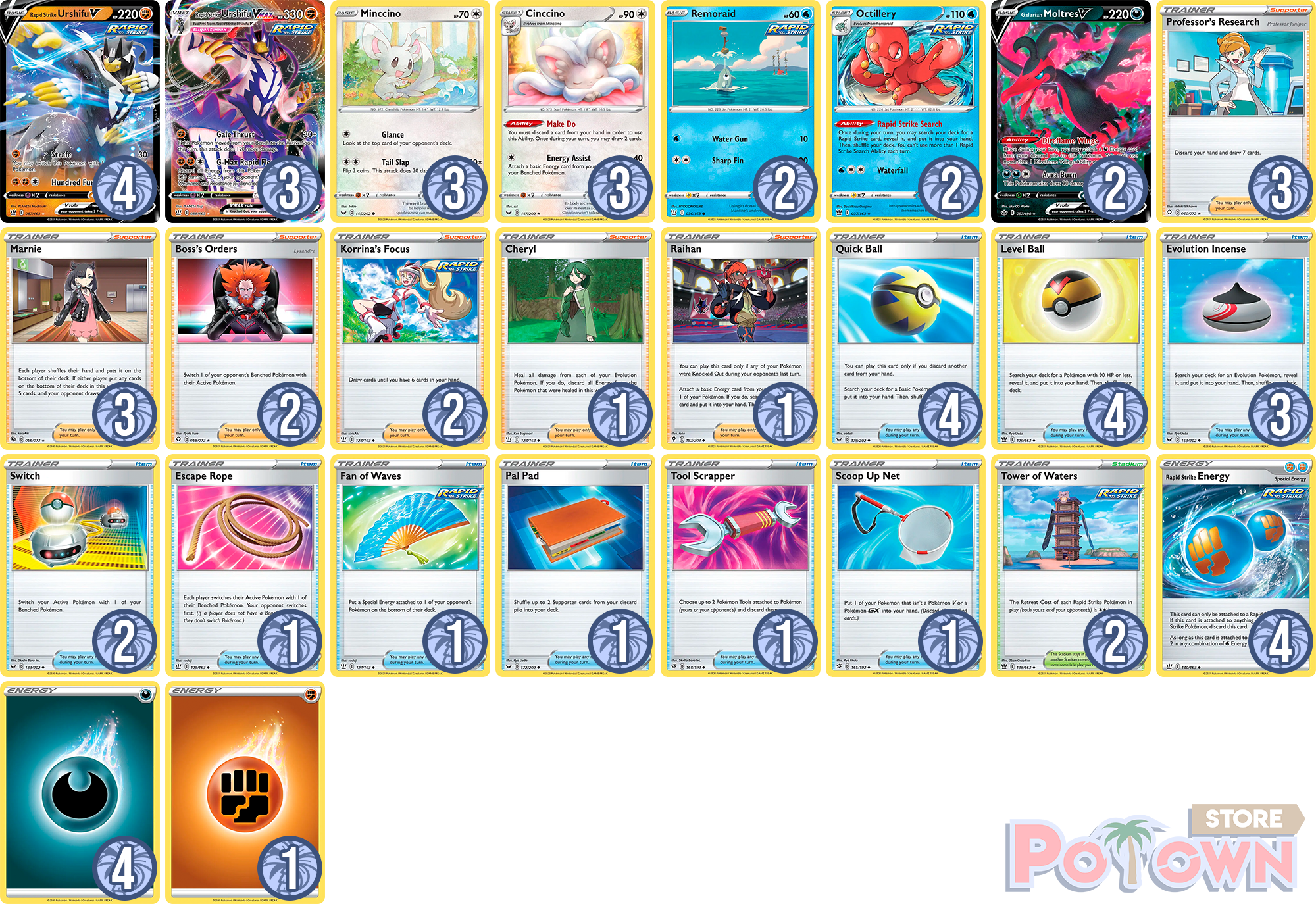 However, this is not set in stone. Other cards you might want to consider adding to the decklist are the following:

From here, the options are almost endless but probably one of the things you are going to want to do as soon as possible is to swap your Cinccino line for Inteleon (4 CRE Sobble, 4 SWSH Drizzile, 2 CRE Inteleon, and 1 SWSH Inteleon). Inteleon has proved to be one of the most consistent engines of the format that supports a very high number of pokemon online decks: Suicune Ludicolo, Jolteon VMAX, Leafeon VMAX, Dragapult VMAX… It is no exception with Rapid Strike as every single member of this water line is a fantastic addition to the deck. While it is true that Cinccino provides draw power, Inteleon just gives you exactly what you need so there is no luck involved.
In addition to this, the fact that Rapid Strike Urshifu requires so little to work (basically special rapid strike energy or single fighting energy) means that you can combine it in multiple ways and that includes a myriad of other elemental typings. Apart from Moltres V (which will always be my top pick), there are some different attackers you might want to consider running alongside. Of course, it is all about testing the different variants and seeing which one you are more comfortable with:
Here are a couple of different tournament-ready Urshifu decks if you want to test them, each of them with its own unique strategy and approach: 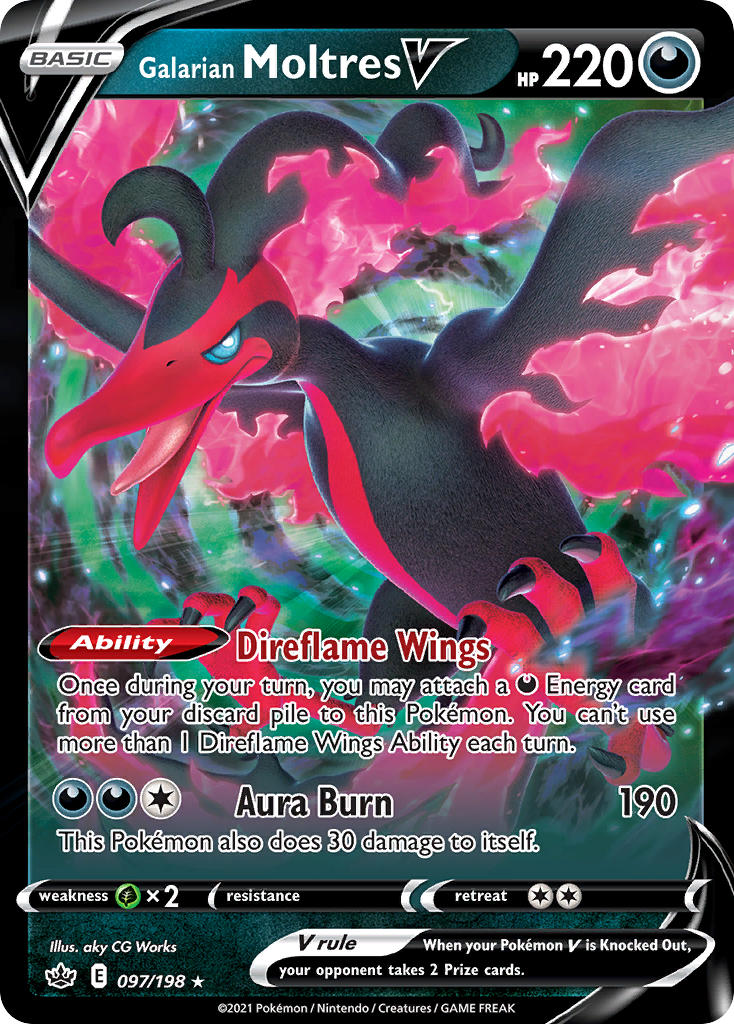 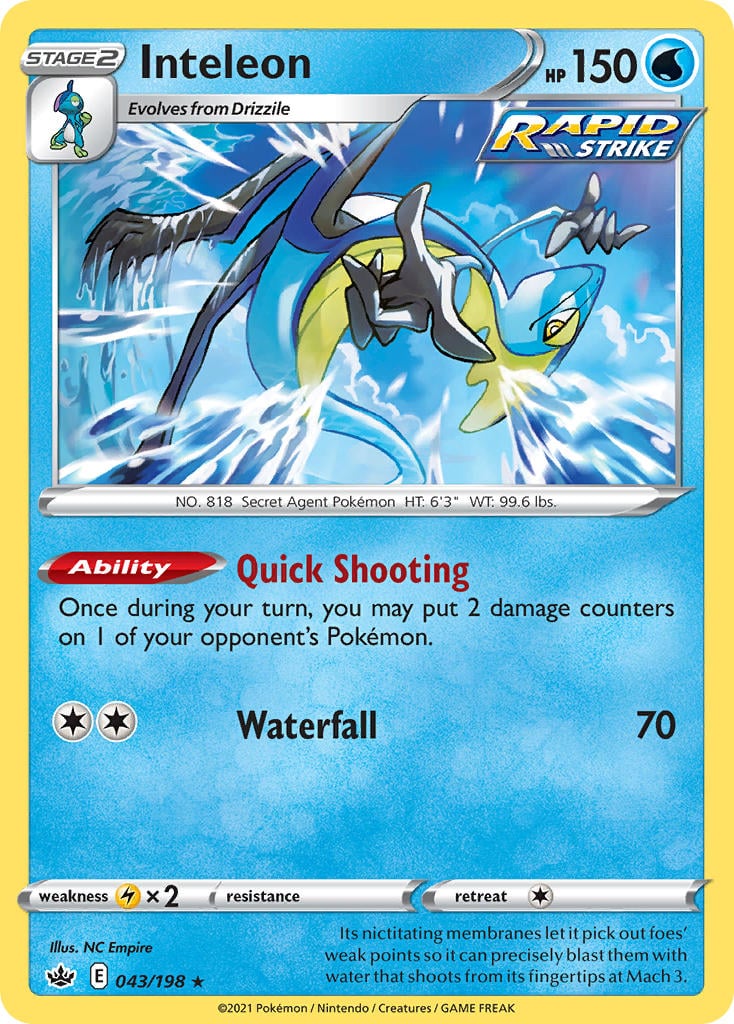 The more standard version. Focuses on dealing continuous damage with Urshifu VMAX and Moltres V is here to save the match up against psychic type decks. 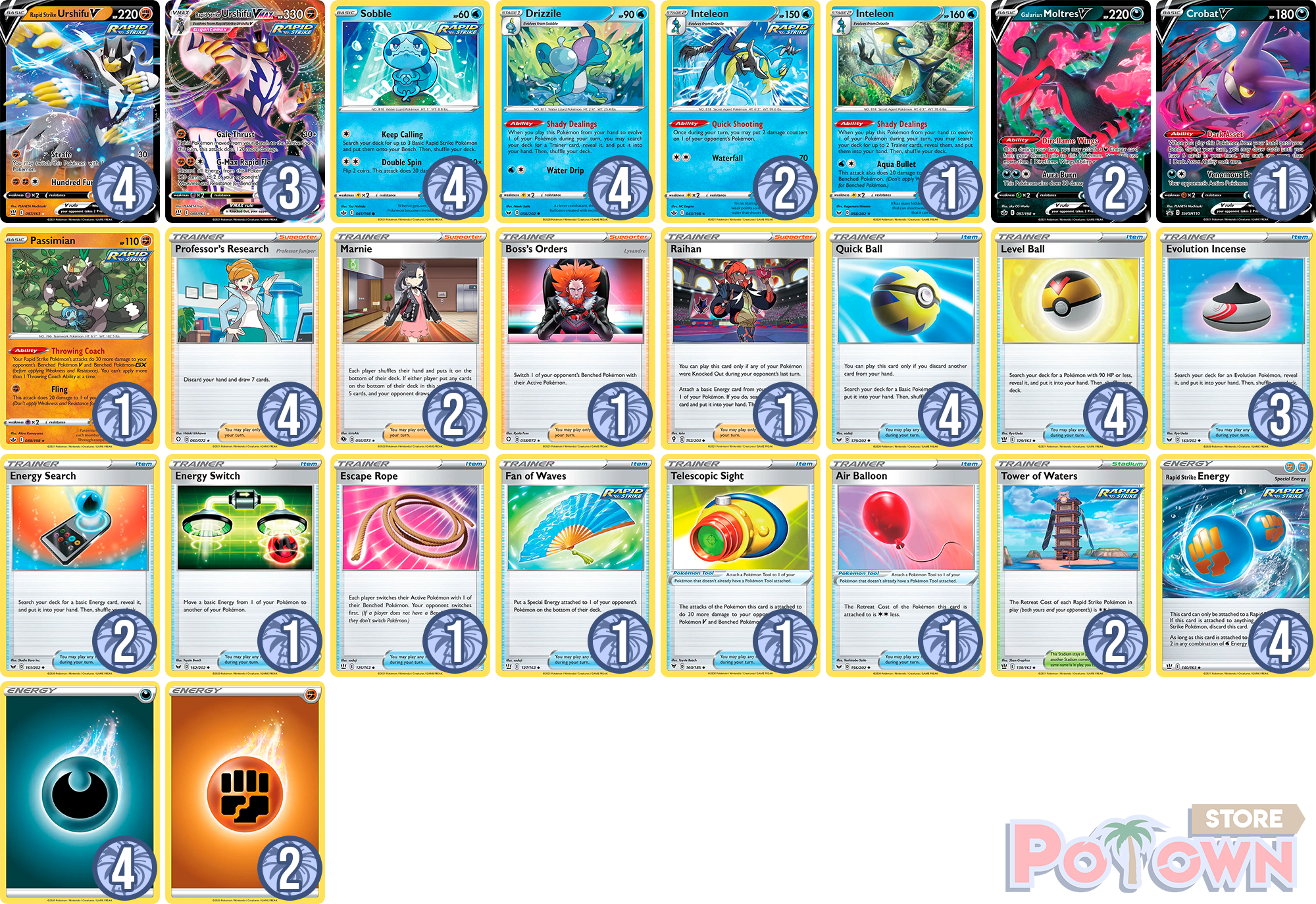 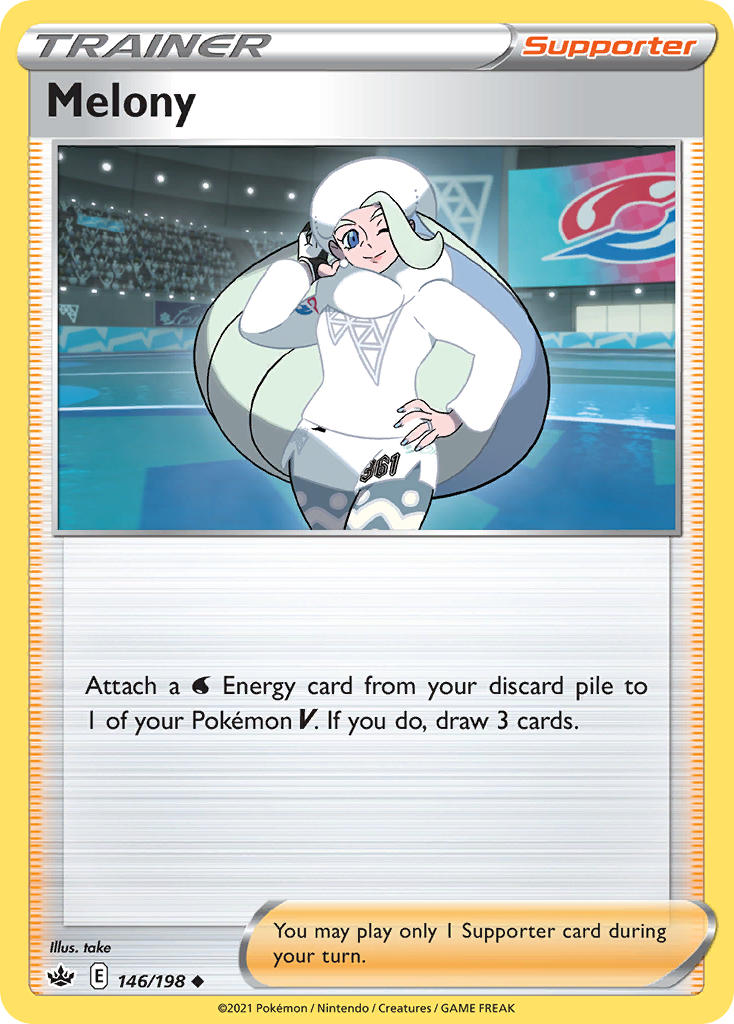 This is a much more turbo version that aims to be constantly using the second attack of Urshifu to put a lot of pressure on your opponent and take down any Pokémon before they even become a menace. 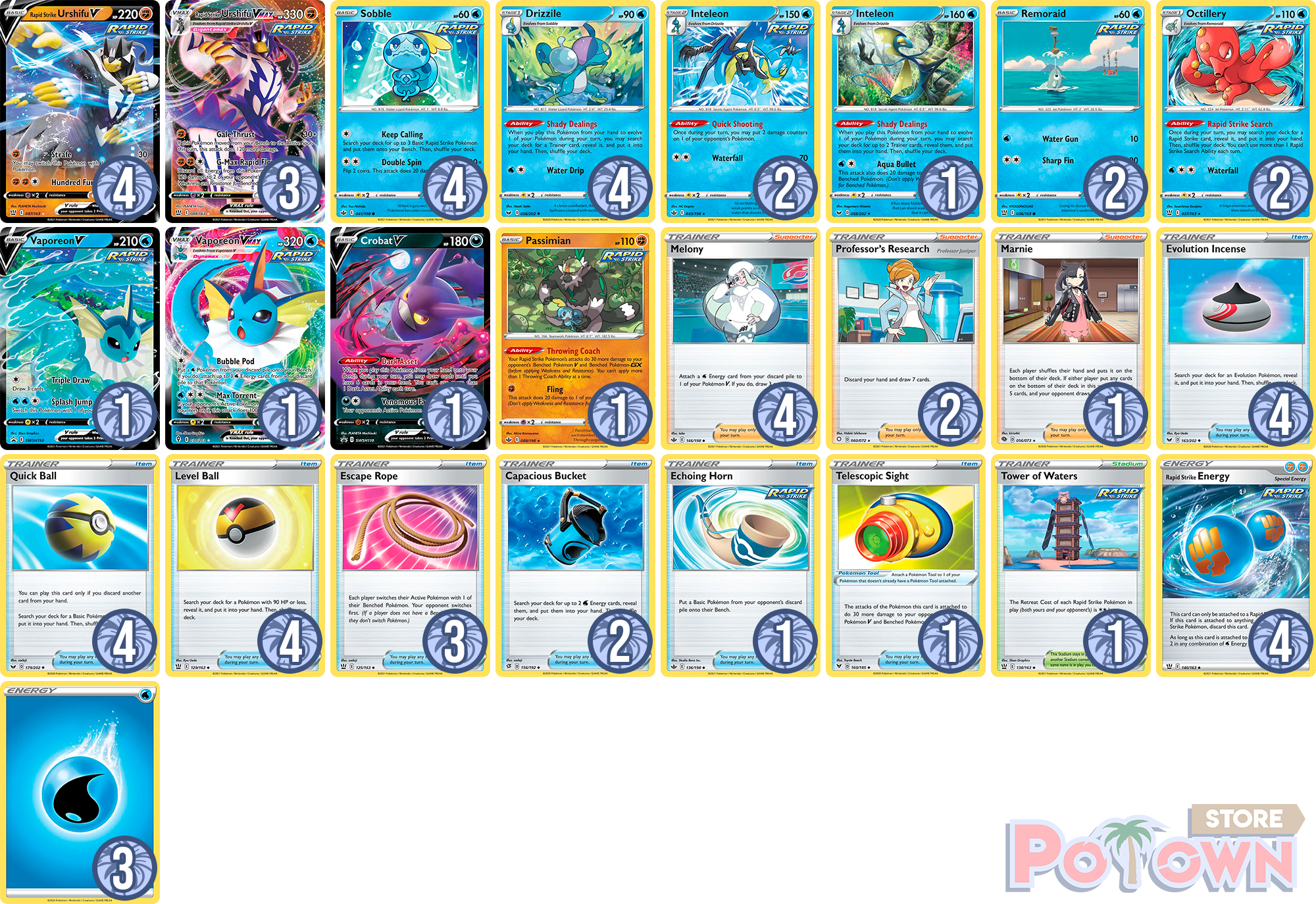 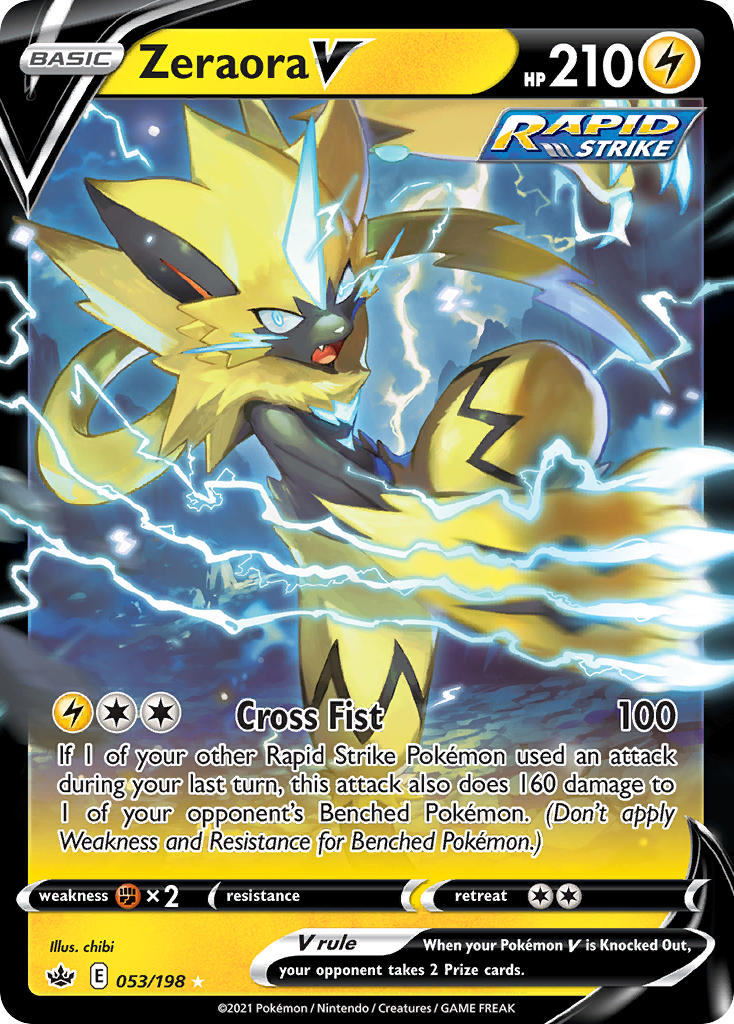 This is a bit more of a rogue deck, especially if we consider that Water is no longer that popular but it can still catch your opponents off-guard. 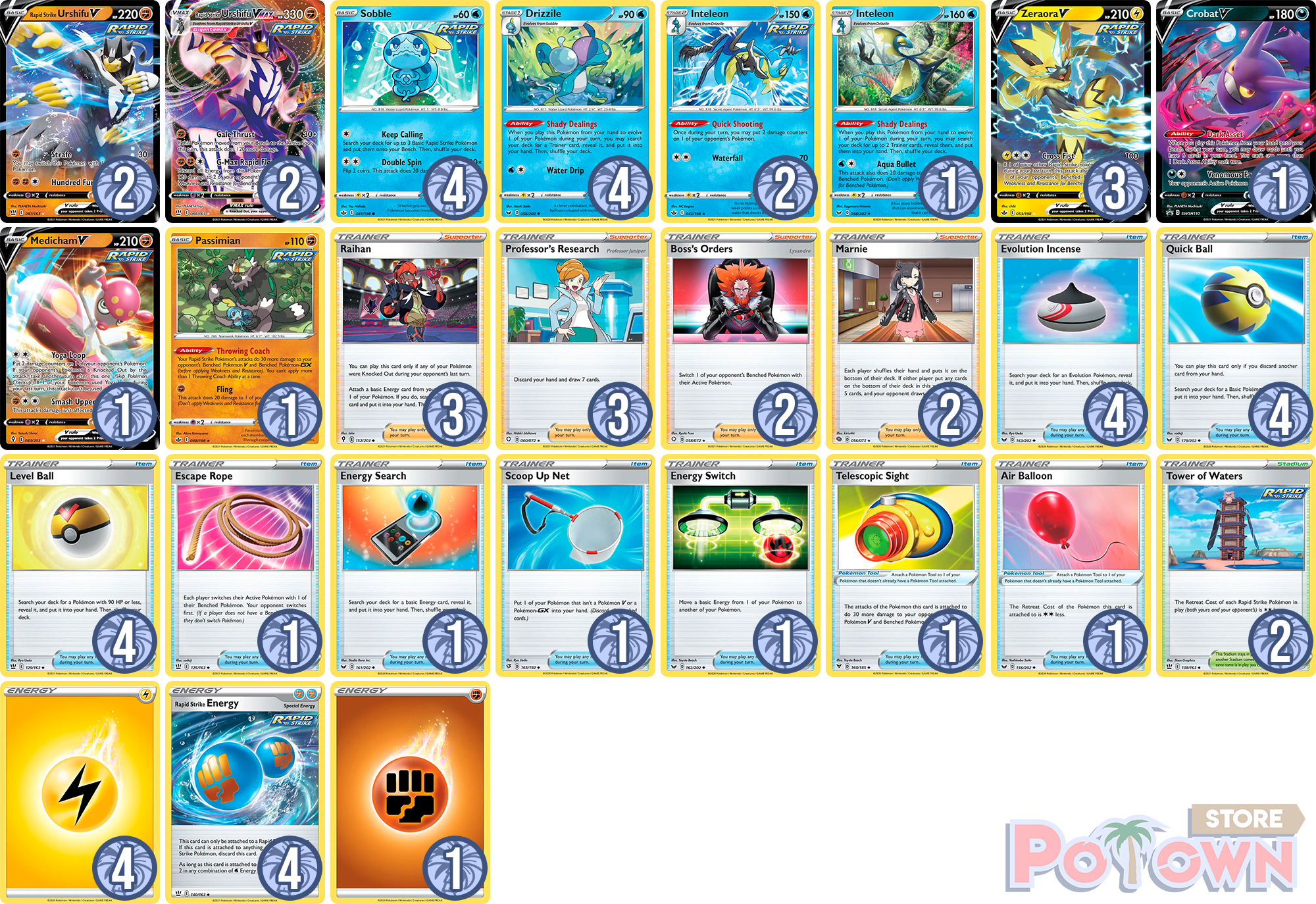 League Battle Decks are a fantastic way of entering in the Pokémon TCG world as they provide you with a very good product you can use right from the start and Rapid Strike Urshifu is precisely one of the best examples of this. With just a few tweaks, you can then take your Rapid Strike Strategy to the next level and start competing on a budget while you familiarize yourself with the game and its mechanics. Once you are ready, you can then get a few more packs and build a final tournament-ready deck in the way that you like the most.
I really hope you have enjoyed this article as much as I did writing it. I strongly encourage you to check the complementary video we have posted on PoTown Store Youtube Channel so you can have a better understanding of how the changes suggested here work in real life. And don’t forget that you can get the Rapid Strike Urshifu Battle League deck as well as packs to improve it here at PoTown Store at the best price. Thanks for reading!