Gengar VMAX is a Monster!

What’s poppin’ Po Town readers? It’s your boy Zach Lesage (@ZachLesagePTCG), and I’m here with another banger article! If you’re reading this, Fusion Strike has just been released worldwide, and I’m here to share my thoughts on Gengar VMAX (Fusion Strike)! I’ve been quite fortunate to be able to test this card for over a month now in real-life tabletop gameplay, which means you get early access to my tournament-ready list! I’ve been testing up a storm with some big content creators, my teammates, and our Pokemon TCG community, so I’m hyped to share my findings with you! With Fusion Strike being a large set at almost 300 cards, you’ll need PTCGO codes to complete your online collection needs, so be sure to grab some right here at the PoTown store. With instant email delivery and an amazing selection, you’re definitely in the right place! Anyways, let’s learn some more about Gengar VMAX!

Time to G-Max Swallow Up

Upon first glance, Gengar VMAX has a lot going for it! It is a Single Strike Pokemon, and it has powerful attacks! Being a Single Strike Pokemon, we know this card can benefit from the many amazing cards that are available for this style of deck. Houndoom (Battle Styles) offers excellent Energy acceleration, Single Strike Energy (Battle Styles) increases your damage output, and Umbreon VMAX (Evolving Skies) is a great way to gust up opposing Pokemon. Gengar VMAX can deal a fair bit of damage with Fear and Panic to punish your opponent for filling their Bench with Pokemon V. G-Max Swallow Up seems to be similar to G-Max One Blow on Single Strike Urshifu VMAX (Battle Styles) with a somewhat lesser drawback. Most importantly, it is Darkness-type! Why does that matter? Well, if you look at some of the top pokemon online decks in the format, you can hit many of them for Weakness. Immediately Mew VMAX (Fusion Strike), Shadow Rider Calyrex VMAX (Chilling Reign), and Dragapult VMAX (Rebel Clash) come to mind. Hitting all of those Pokemon for double the regular amount of damage is a great way to steal some games! So yeah, this card is viable, but where does that leave us? Well, luckily, we have access to a similar archetype that we can plug and play Gengar VMAX into almost immediately. I’m talking about Single Strike Urshifu VMAX / Umbreon VMAX. Let’s look at my most updated list for this archetype first, and I’ll share my thoughts on evolving this archetype. Let’s get it! 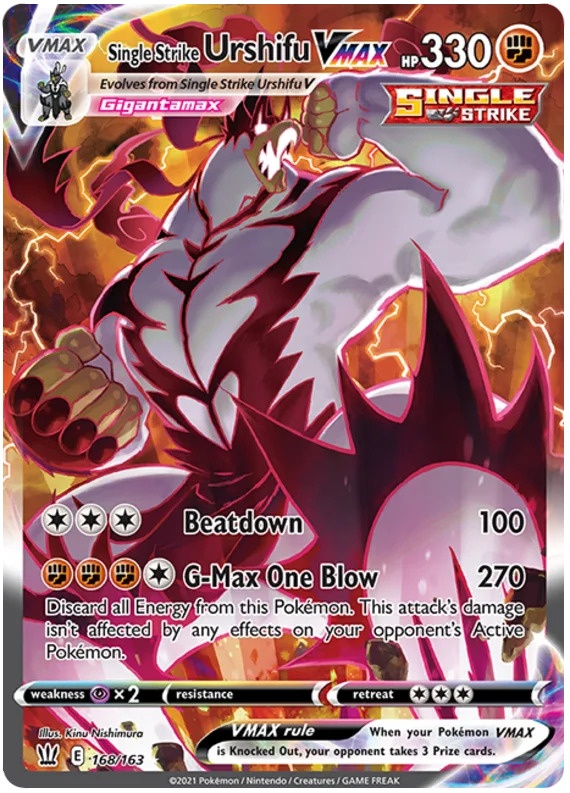 Single Strike Urshifu VMAX has been tearing up events in our Sword and Shield to Evolving Skies Standard format, and for a good reason - it's incredibly effective. Based on the Single Strike engine, this deck has access to powerful attacks, exclusive Energy acceleration, freebie gusting, and a variety of tricks to use. Umbreon VMAX can be the main attacker of the deck, but it’s typically reserved for KOing Pokemon V and Pokemon that are weak against Darkness type Pokemon. Single Strike Urshifu VMAX is the main attacker of this deck because it has the powerful G-Max One Blow attack that can OHKO any VMAX in the game after attaching a few Single Strike Energy. It comes at a steep cost of discarding all of the Energy attached to it, but it also goes through everything. The other good thing about Single Strike Urshifu VMAX is that it's a Fighting-type Pokemon. Umbreon VMAX can easily handle Dragapult VMAX, Mew VMAX, and Shadow Rider Calyrex VMAX, but that's half of the attacking Pokemon in this deck. Single Strike Urshifu VMAX is strong against Eternatus VMAX (Darkness Ablaze), Jolteon VMAX (Evolving Skies), and Gengar VMAX. This half-and-half strategy is seemingly mended together with the Single Strike stamp to make it all work. Let’s look at this list quickly before looking at my take on Gengar VMAX. 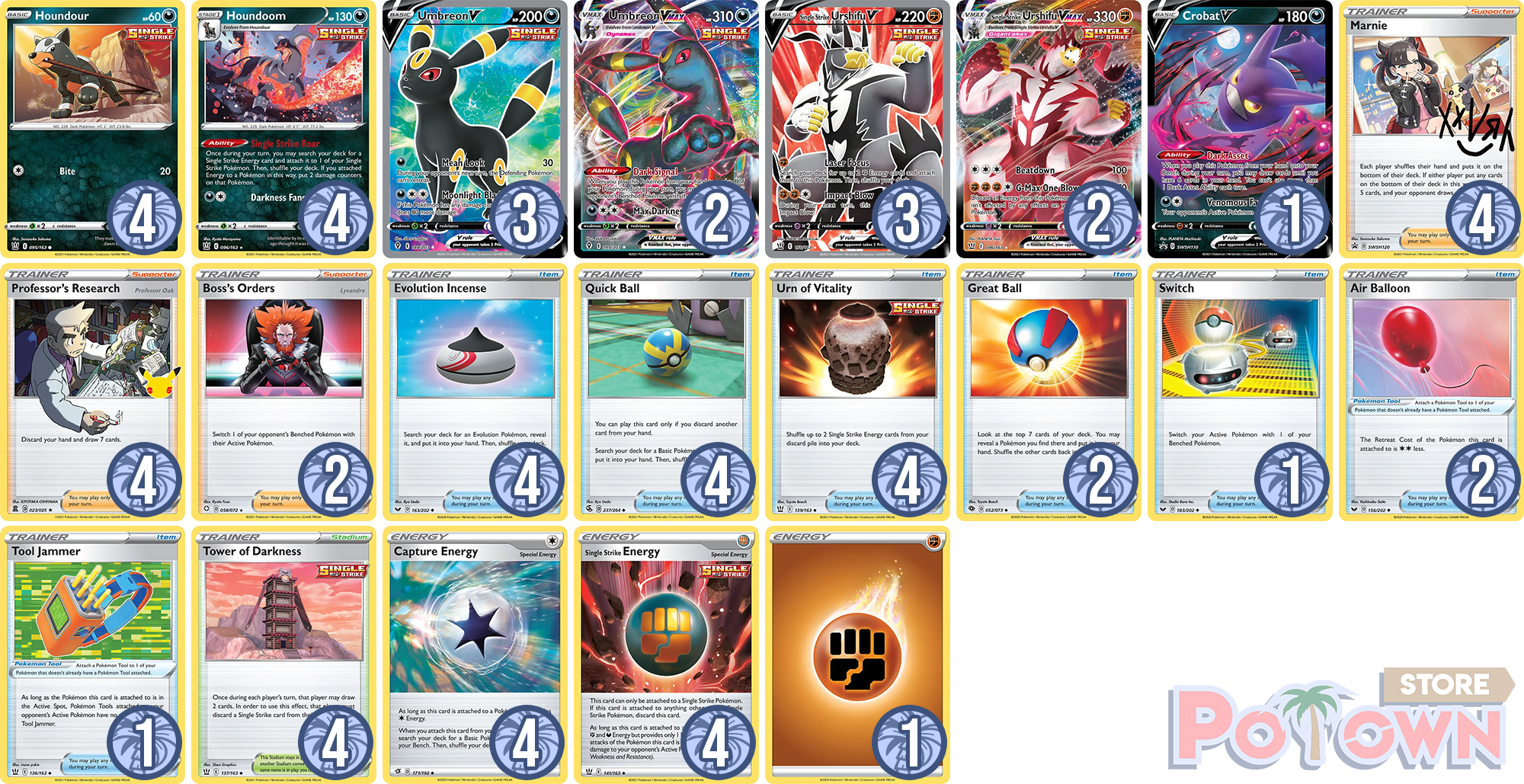 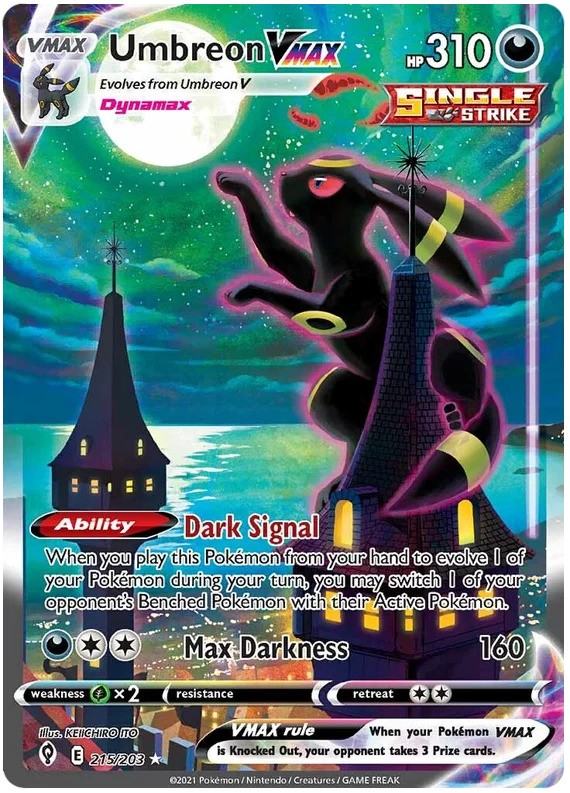 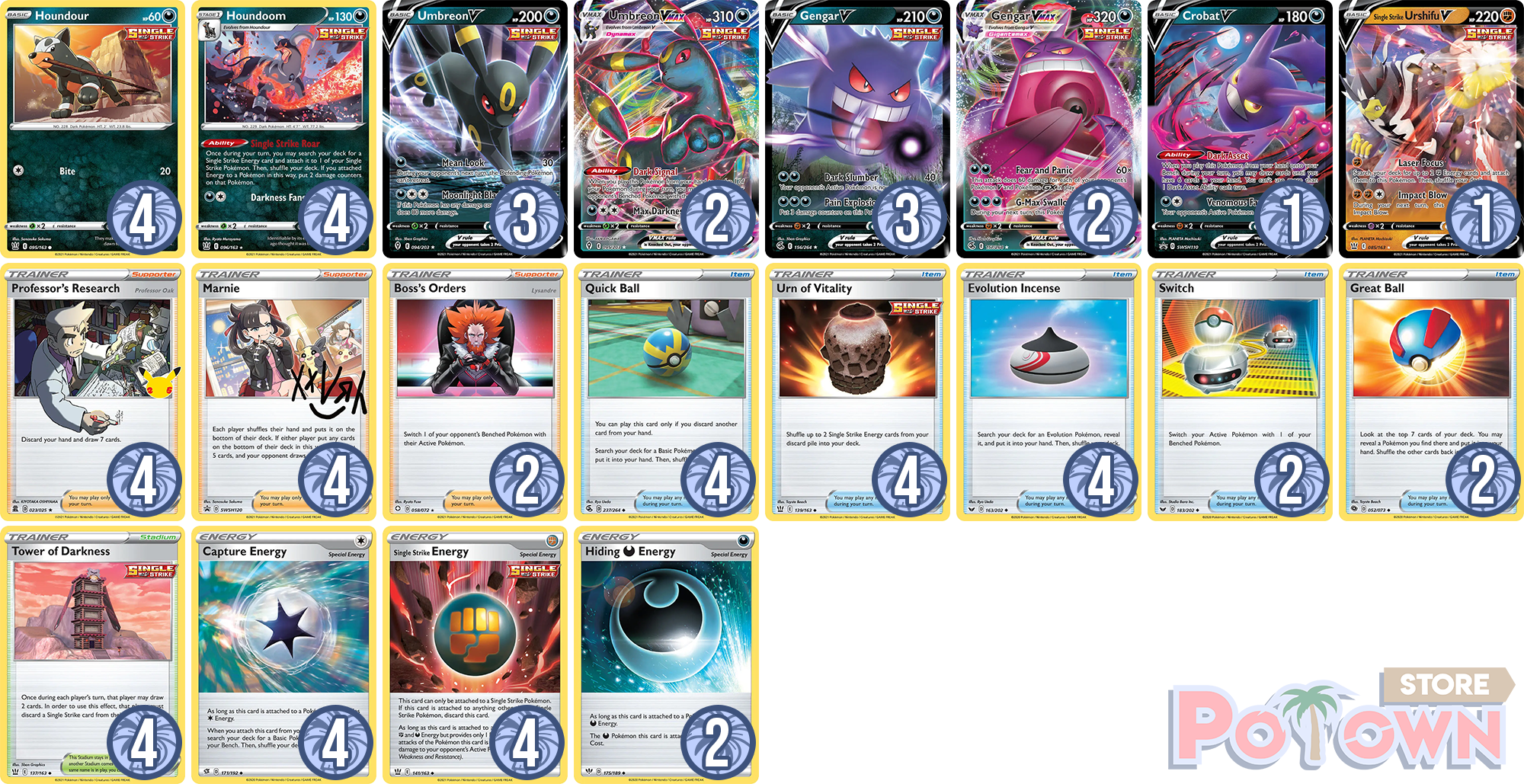 Well, that’s what I have for Gengar VMAX for today! Out of all of the new pokemon online decks that I’ve tested, Gengar VMAX has by far been one of the most impressive. It all lies in the beauty of the Single Strike engine - it was incredibly easy to build off of a successful tier one deck and tie some loose ends to make Gengar VMAX fit in. I still want to test this deck more to make sure everything is perfect with the list, mainly I need to see if Capture Energy (Rebel Clash) is needed, but I’ll be sure to keep everyone updated here! I hope this list fares you well in your Fusion Strike testing and gives you a headstart ahead of the competition! My goal is to finetune as many new decks and share all of my findings with our Pokemon community in the process. As always, Po Town readers will be included when I share my findings, so be sure to read all of our amazing articles. If you need any of the cards in this article, be sure to pick up some PTCGL codes from Po Town to get what you need.