Posted by Pokemon TCG trainer on 9/29/2021 to Deck Lists
Good morning trainers! It seems that the metagame has progressed since our last expansion, Evolving Skies, has been released. VMAXs is the main constant taking place right now, followed closely by Pokémon V in an effort to trade positively and ultimately win the game before opponents can. With that being said, where are the single Prize Card attackers? In our previous format, we had Blacephalon UNB as a prime example of a mainstream single Prize Card attacker; now, we don’t really have this category existing. It seems that they’re being overlooked because they aren’t as consistent as V or VMAX pokemon online decks, but this isn’t always the case. Pokémon V decks are now the new “single Prize Card” decks, and they’ve phased out single Prize card attackers. Right now is a very interesting time to actually play one Prize Card attacker because they are the most efficient at trades. If you’re able to OHKO a VMAX Pokémon with a single Prize Card attacker, you’ll go up +2 Prize Cards in the trade. One of the best decks that can do that right now is Regidrago. Let’s get into why I think this deck could potentially do some damage in this format!
I booted up my Pokemon Trading Card Game Online app, loaded up some PTCGO codes, and then traded those Pokemon online codes to trade for this deck. I was very excited, and it honestly didn’t take that many PTCGL codes to make the deck. If you’re looking to buy some codes, we sell them here on Potown Store, and I highly urge you to check out our competitive pricing and swift delivery! Let’s talk about the newest way to play Regidrago today! 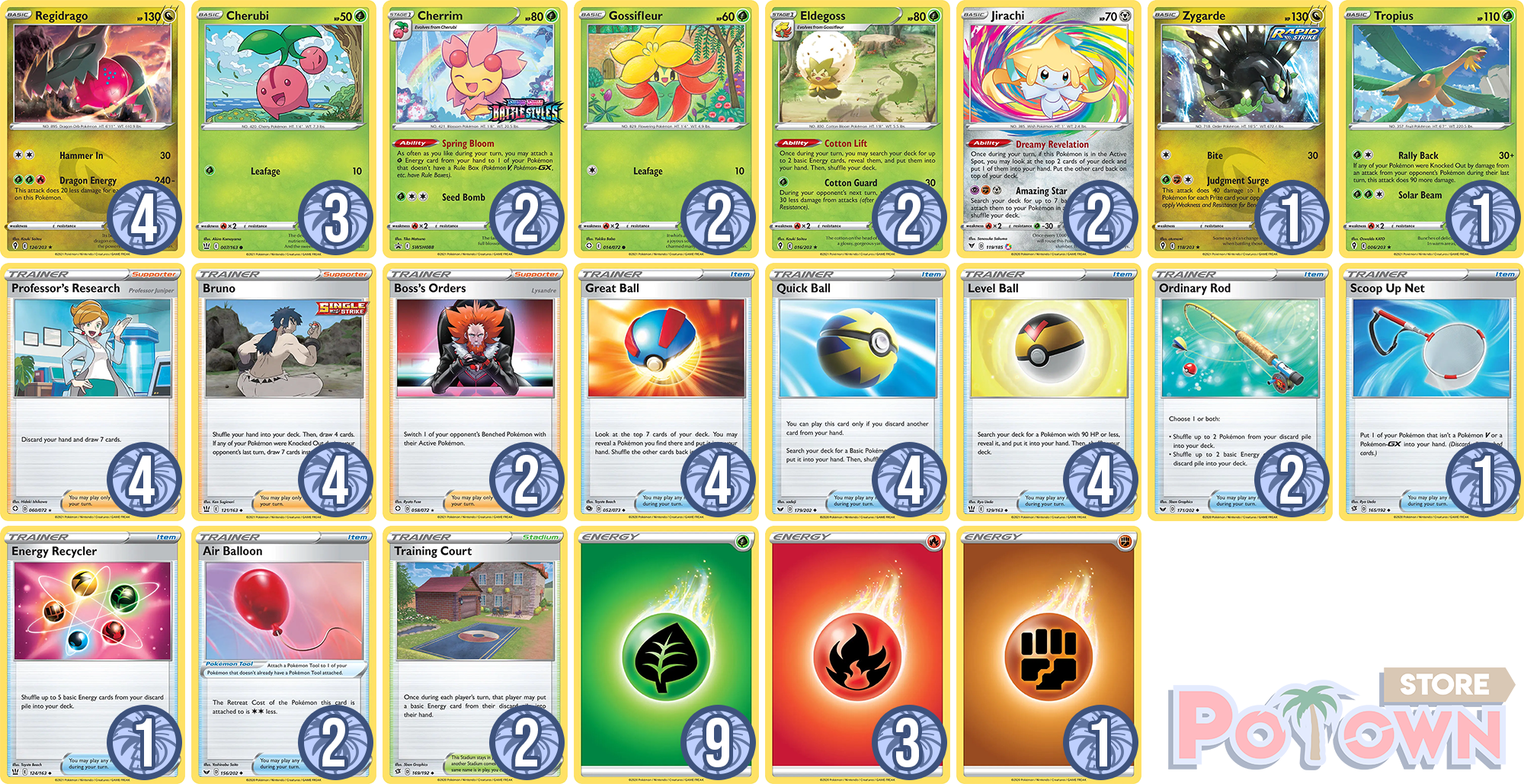 The main strategy of this deck is simple: you’ll want to setup a board that can resurrect attacker after attacker without fail, triumphing on our opponent after we draw our final Prize Card. Using Jirachi’s ability, we can find key cards to setup our board state that will eventually sustain itself. We can do this by setting up an Eldegoss to search for energy out of your deck, Cherrim to consistently attach energy cards to your attackers, Training Court to recover energy cards from the discard pile, and of course, Jirachi can find your attackers out of the deck. Once you piece together this dream team, your Pokémon are pretty much free to run ramped on your opponent’s VMAX Pokémon. Your Regidrago isexpected to die turn after turn, so you need to be aggressive in getting an attack off on the second turn of the game. You can beat a VMAX deck with relative ease in four attacks, so provided you get the first attack off, you should have tons of time to win a game. Let’s go over some copies of key cards that can aid you in crossing the finish line. 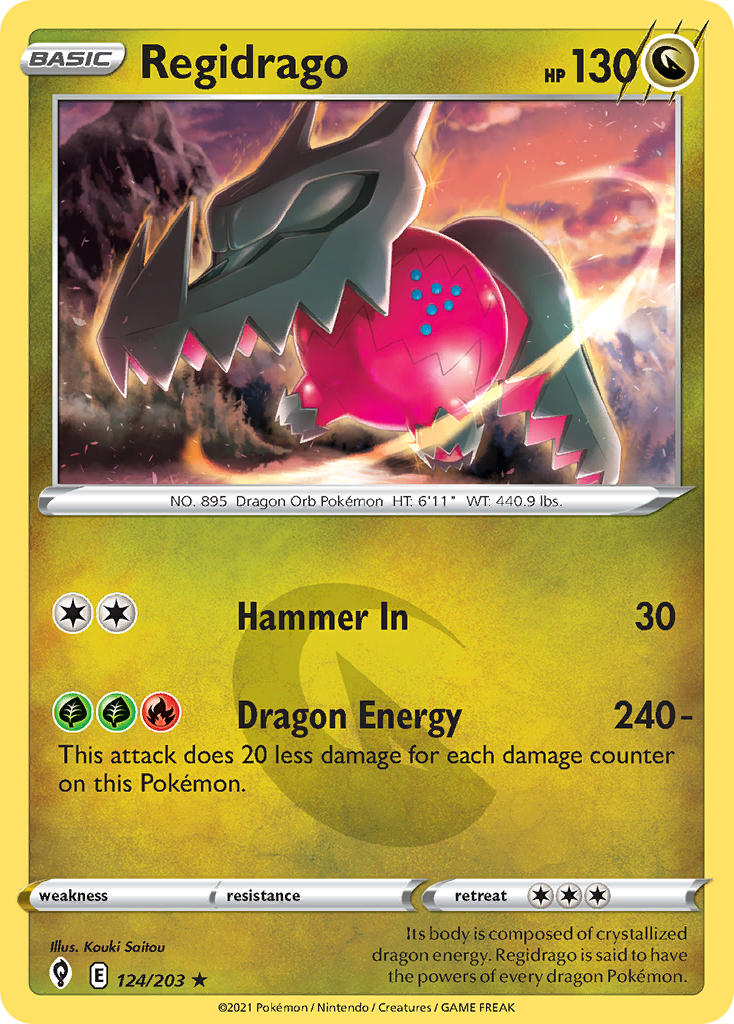 4 Regidrago - This Pokémon is the definition of a glass cannon: high damage output but extremely low HP. It’s a Dragon-type, which is something very uncommon to note. We won’t be hitting anything in Standard for weakness, but we simultaneously also won’t be hitting for resistance. We don’t have a weakness ourselves, and the retreat cost of three is a little brutal. We don’t play this Pokémon as our main attackers for those factors, though - we play this Pokémon because it’s an absolute UNIT! For GGR, we can hit 240 damage onto the defending Pokémon! This attack has a drawback: it does “20 less damage for each damage counter on this Pokémon” but that’s ok since we expect full-on for our opponent to OHKO Regidrago every time without fail. This main attacker can OHKO Pokémon V and 2HKO VMAXs. 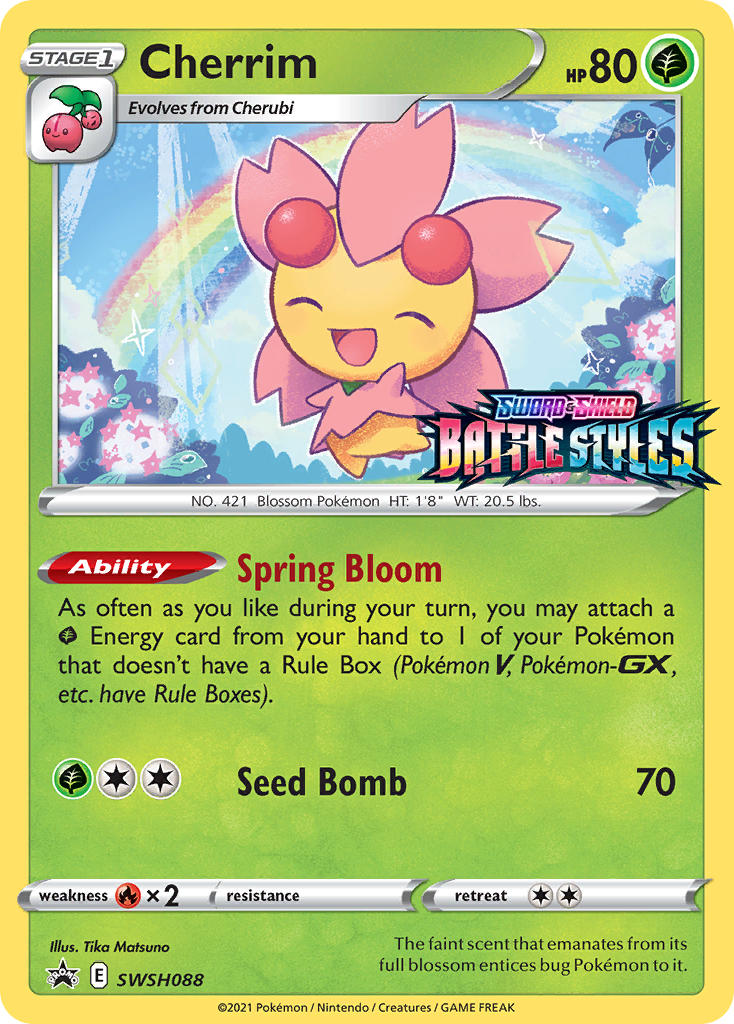 3-2 Cherrim - Cherrim is our way of powering up our Regidrago efficiently one-by-one as they each get OHKOed. We can attach Grass Energy to our Pokémon in any way we like, provided they don’t have a Rule Box. Opponents will always tend to KO our Cherubi before they can evolve, so it’s essential to try and have more on the field than you think (hence why we play three copies of Cherubi). Cherrim even has an attack that can help finish off VMAXs after a hit from Regidrago. 80HP is pretty low, though, so keep your Cherrim safe! 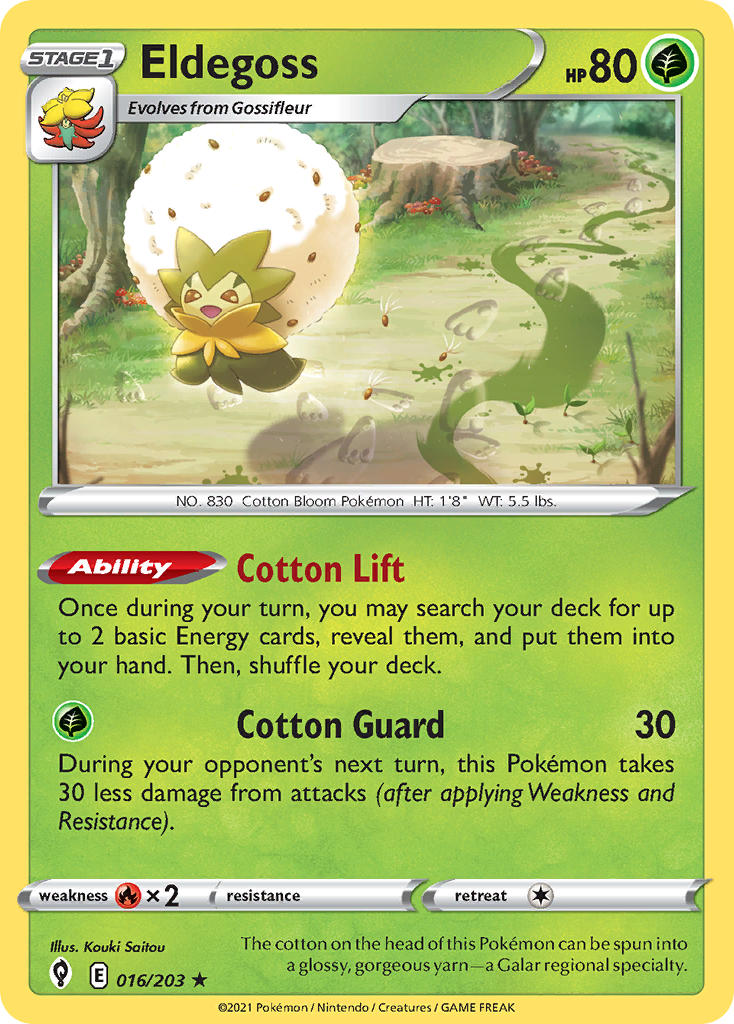 2-2 Eldegoss - A slightly less important component to our board (but an important component nonetheless), Eldegoss grants is the ability to search for two energy cards every turn. This idea for the deck was actually brought on during one of AzulGG’s streams, whereas initially, Azul thought it was a joke. After trialing the card, it ended up being quite good in the deck and is now a mainstay in the archetype! Functioning as a “double Energy Search”, you can consistently ensure energy for your next Regidrago while also thinning the deck drastically throughout the course of a game. This will make your Jirachi more effective as well when using Dreamt Revelation because you won’t be drawing into energy. You can also search out Fire Energy with this ability, which is useful because there aren’t too many of those on the list. You can attach any energy you find with this ability directly to your attacks, provided you have Cherrim in play. See the synergy this card offers the deck? It’s immaculate! 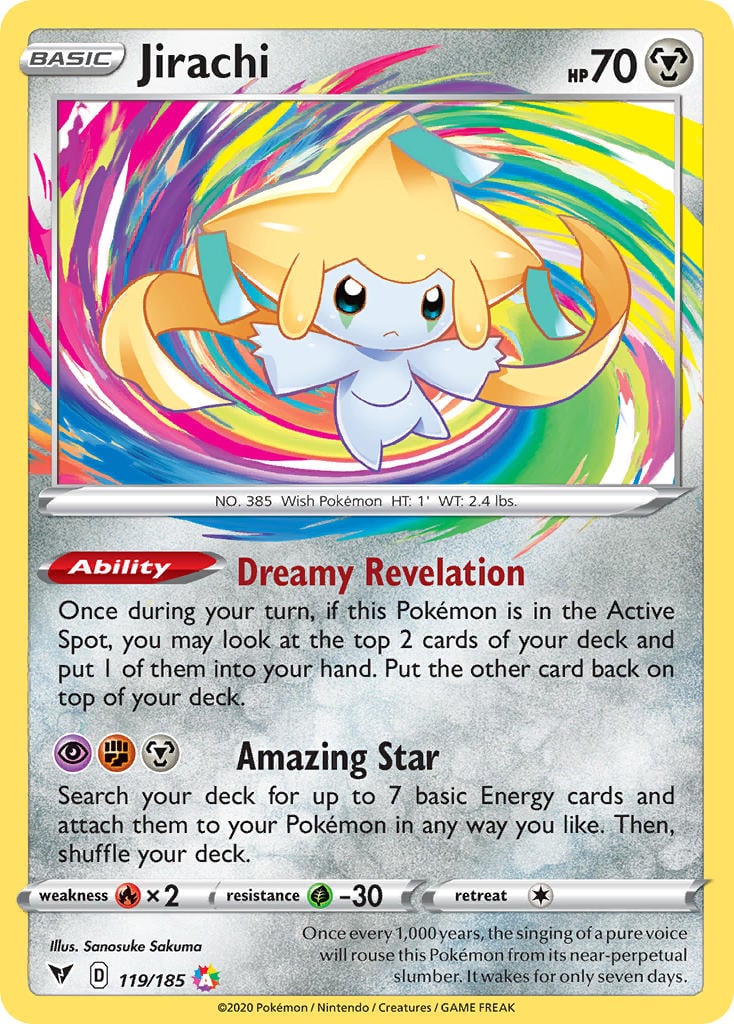 2 Jirachi - Our ideal starter. With its Dreamy Revelation ability, it can setup our board with ease. It can also become a beautiful pivot for when our Regidrago’s are getting KO’ed. If we send it into the active as a pivot after each KO our opponent takes, that means we can maximize our value with Jirachi considering you can only use its ability in the active position. We use this ability to primarily find attackers in the mid-game and set us up in the early game. A late-game it can fill the gap for whatever we need!
1 Tropius - Tropius is a very efficient attacker that provides a different typing to our deck. This Pokémon is very good at being able to hit things with Grass-type weakness for large amounts of damage, such as the very popular Galatian Moltres V (yes, it is indeed weak to Grass). Tropius can finish off a VMAX after it has taken a hit from Regidrago and thus gets a nice inclusion in this deck.
1 Zygarde - Many Pokémon in the current format have such high HP that they can take two hits from a Regidrago without being KOed. Zygarde is an excellent option for cleaning off those Pokémon because Zygarde can pick off damaged Pokémon from the bench. A late-game sweeper, this Pokémon does extra damage for each Prize card you have taken, so you can use this instead of needing a copy of Boss’ Orders in your hand. You do need a Fighting Energy to attack, however you can search for that with Eldegoss’ ability. You can recover this Pokémon with Ordinary Rod for additional sniping potential.
4 Bruno - A very weak Supporter card in the early game, this card is an amazing inclusion for any single Prize Card deck. Bruno can be efficiently used at many points in the game when you consider how many KOs the opponent will have to take to win a game. That being said, there will be many windows in a game that you’ll be able to use Bruno to the full effect during. We don’t use Marnie because Bruno will almost always get more value out of being played.
2 Training Court - An amazing Stadium card that can aid us in achieving our picture-perfect setup. Training Court can retrieve Fire Energy from our discard pile which is essential for powering up Regidrago. It can also recycle our 1-of Fighting Energy to reuse Zygarde once more as well. Generally, this Stadium is pretty neutral, but in this deck, it favors the Regidrago player by far way more than the opponent. This is a staple in this deck!
2 Air Balloon - Air Balloon is a necessary pivot on Jirachi so you can abuse its ability over and over to setup your board. Your Pokémon will be getting KOed back to back and you’ll need something to send up after those KOs. Air Balloon is the best way to do it.
2 Ordinary Rod - A mandatory recovery card in this deck. Many opponents will try to take out your Eldegoss and Cherrims from play, and you’ll need to recover them and continue to set them back up once again. Likewise, retrieving energy back from the discard is also beneficial because you can search them immediately back out with Eldegoss. You may need a full six attackers in a game, and Ordinary Rod ensures that.
4 Level Ball - Most of our deck is entirely searchable via Level Ball, and we take full advantage of that by playing a maxed out four copies of this card! Level Ball is too good to not play. We just can’t search out our attackers with it, but that’s why we play Quick Ball.
4 Great Ball - Great Ball is a necessary evil in our deck, even though we may whiff at times. With all the deck thinners we play (especially Eldegoss) we can almost be certain at times that we will hit a target. With that in mind, in the early games, we want to play Great Ball before other Ball cards because we don’t know what we’re going to hit; that being said, we do need to hit SOMETHING in order to setup (and we most likely will get a hit), so that’s why Great Ball is good.
2 Boss’ Orders - Alongside Zygarde, these Boss’ are great at finishing off damaged Pokémon off the bench.

This deck is one of the most fun pokemon online decks to play in the format, and it really stands a chance against almost anything it its path provided you setup. If you like trading efficiently with Pokémon V and VMAX then I highly urge you to try out this deck. This deck doesn’t require too many PTCGO codes because it only needs a few cards from the new expansion, so it’s perfect for beginners. I’d suggest nabbing some PTCGL codes and building this deck online because this deck will only get stronger. Until next time, have fun!
If you’re looking for codes for Pokemon TCG live play, feel free to pick some up in our shop. We offer Pokemon codes at a very competitive price and ensure instant delivery of your PTCGL codes directly to your email. Thank you for reading this article today on Potown store! Have a great day.
SHARE THIS POST
Previous Post
Next Post