Evolving Skies, our newest Pokemon TCG set is upon us and it has brought many amazing cards. This set brings back Dragon-type Pokemon for the first time since Cosmic Eclipse, brings back fan-favorite Pokemon such as Rayquaza VMAX (Evolving Skies) and Flareon VMAX (Evolving Skies), and gives newer Pokemon their first outing in the TCG like Regidrago (Evolving Skies). I could easily give you a rough idea of my personal top five cards, but I thought it would be fun to look at some of the more interesting cards getting released. All of these cards listed have something unique about them - an attack, Ability, or something that has potential. They all aren’t as polished as Flaaffy (Evolving Skies), but they certainly could rise to the skies at some point in their life cycle. If you’re looking for any of these cards or any cards in general, you’re in the right place! PoTown Store has a large selection of PTCGO codes at great prices! Anyways, let’s jump into this article and see what treasures await in this set release! 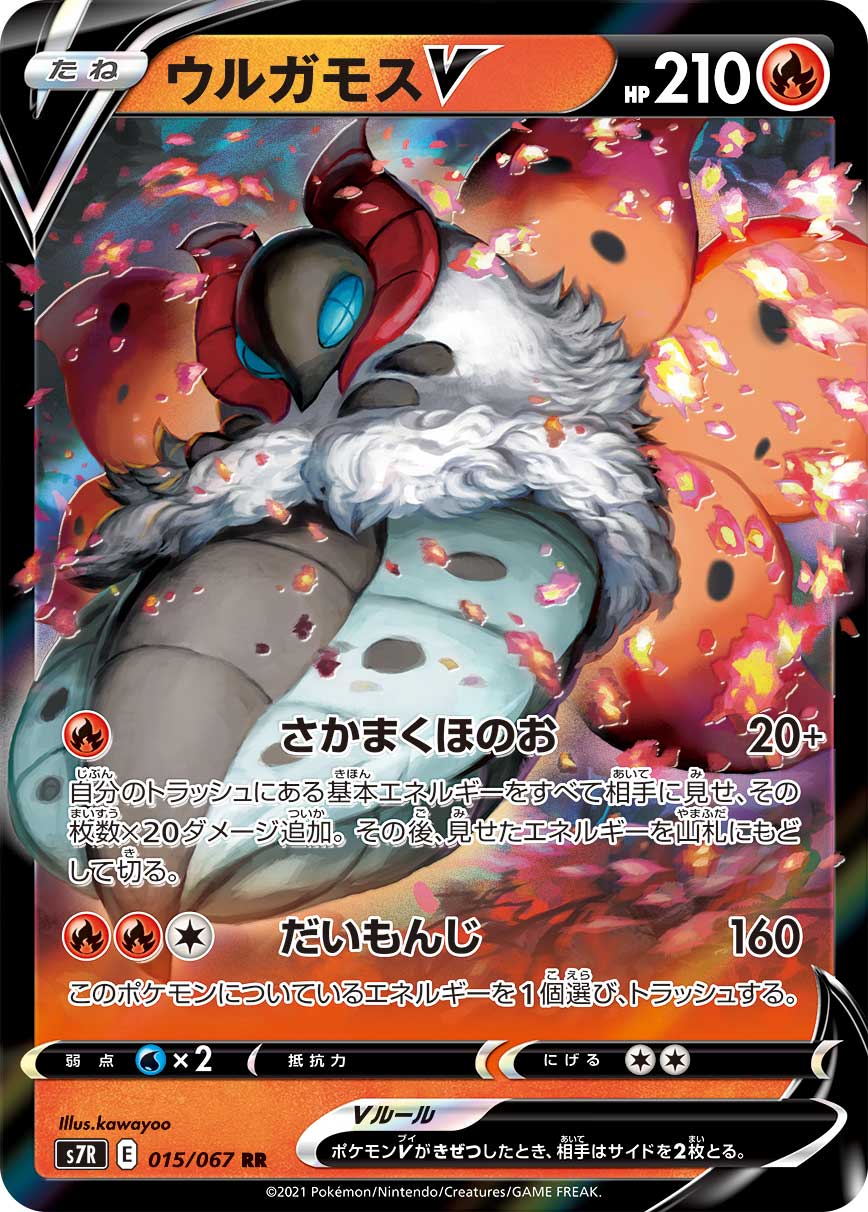 When we lost Victini Prism Star (Dragon Majesty) to our Rotation about a year ago, I was personally upset! I’ve built a name for myself by playing Fire-type decks and that was personally my favorite card in many decks that I’ve played at the top tables around the world. Fast forward to a couple of weeks ago, I think Victini Prism Star has given me a bit of a blessing by being spiritually released as Volcarona V (Evolving Skies). Surging Flames costs less Energy to use, does 20 more damage, and is a likely inclusion in any Fire-type deck going forward. I’ve personally thought about playing this card with Blacephalon (Unbroken Bonds) and a bunch of Fire-type attackers, but that seems to only scratch the surface. I have many fond memories of rotating through my Energies in play at Oceania Internationals, reusing them, and using Victini Prism Star again. While the format has changed a bit and VMAX Pokemon have much more HP than Tag Team GX Pokemon, I still think that Volcarona V is a much-needed asset to Welder (Unbroken Bonds) Pokemon online decks that have seen much success before. Fire Blast is also a suitable replacement for other Basic Fire-type attackers, like Heatran-GX (Unified Minds), because you can hit for 160 damage after a manual Energy attachment and Welder combo. I have high hopes for this fiery bug and I can’t wait to play around with some Fire-type decks once the set releases. 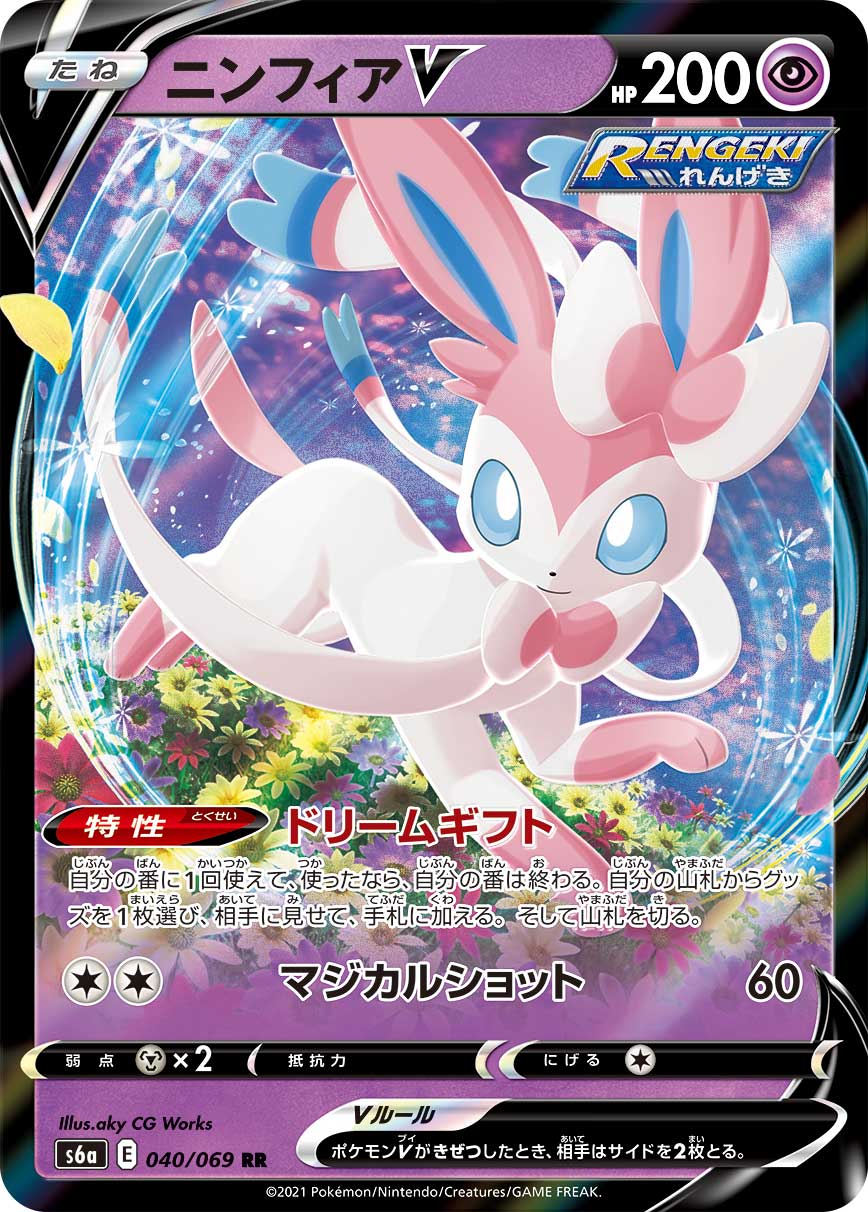 When I first read this card, I immediately thought of Control decks that play Zacian V (Sword and Shield), it could really work! Dream Gift allows you to search your deck for an Item card, put it into your hand, and end your turn. Similarly, Intrepid Sword is used in Control decks to draw three cards and end your turn. While there is a huge difference between drawing three cards and grabbing a single Item card, the importance of either depends on a turn-by-turn basis. It also depends on what you’re looking for and if your Pokemon online deck can handle ending your turn. Cards like Lillie’s Poke Doll (Cosmic Eclipse) can be used as a freebie sacrifice in the Active Spot while you use Dream Gift to search for a Crushing Hammer (Sword and Shield). The viability of this card seems to rely on the number of unique Item cards in your deck and style of deck, but it is a unique card that we haven’t seen in a while. I’m sure there are more obvious uses, like Evolving it into a Sylveon VMAX (Evolving Skies), but the above strategy seems like an overlooked option for some decks. Whether you are looking for a cool card to build an oppressive Control deck with or you happen to love playing with “Eevee”-lution Pokemon, this card is certainly an option! 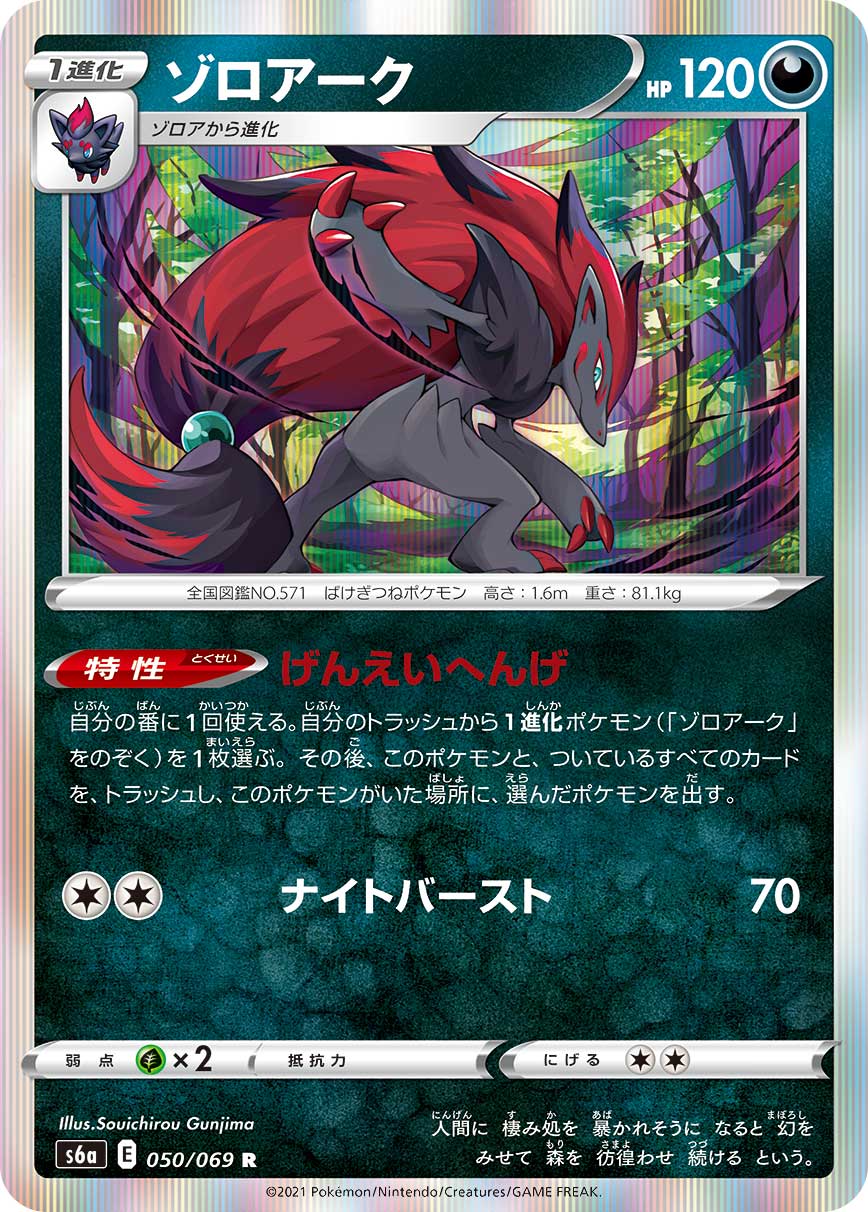 I could have put Zoroark (Evolving Skies) at number one and I don’t think anyone would bat an eye, but I’ll put it at number three because the top two cards are more interesting to me for some reason or another. Illusion Transformation is likely one of the most unique Abilities I’ve ever read and that says a lot. It allows you to search your Discard Pile for a Stage 1 Pokemon (excluding any Zoroark). You then discard Zoroark and all cards attached to it, then put the new Pokemon in this one’s position. I haven’t compiled a list of cards that it could transform into, but the new Milotic (Evolving Skies), Octillery (Battle Styles), or even a Malamar (Chilling Reign). The options seem nearly unlimited in Expanded and with each new set released in Standard, we will have to revisit the viability of this card. I foresee it being used as some sort of toolbox approach - playing a handful of utility Stage 1 Pokemon and getting them out depending on the matchup or situation you are in. I’m sure these ideas only scratch the surface, but this card seems like it will see a large amount of success during its lifetime in Standard. 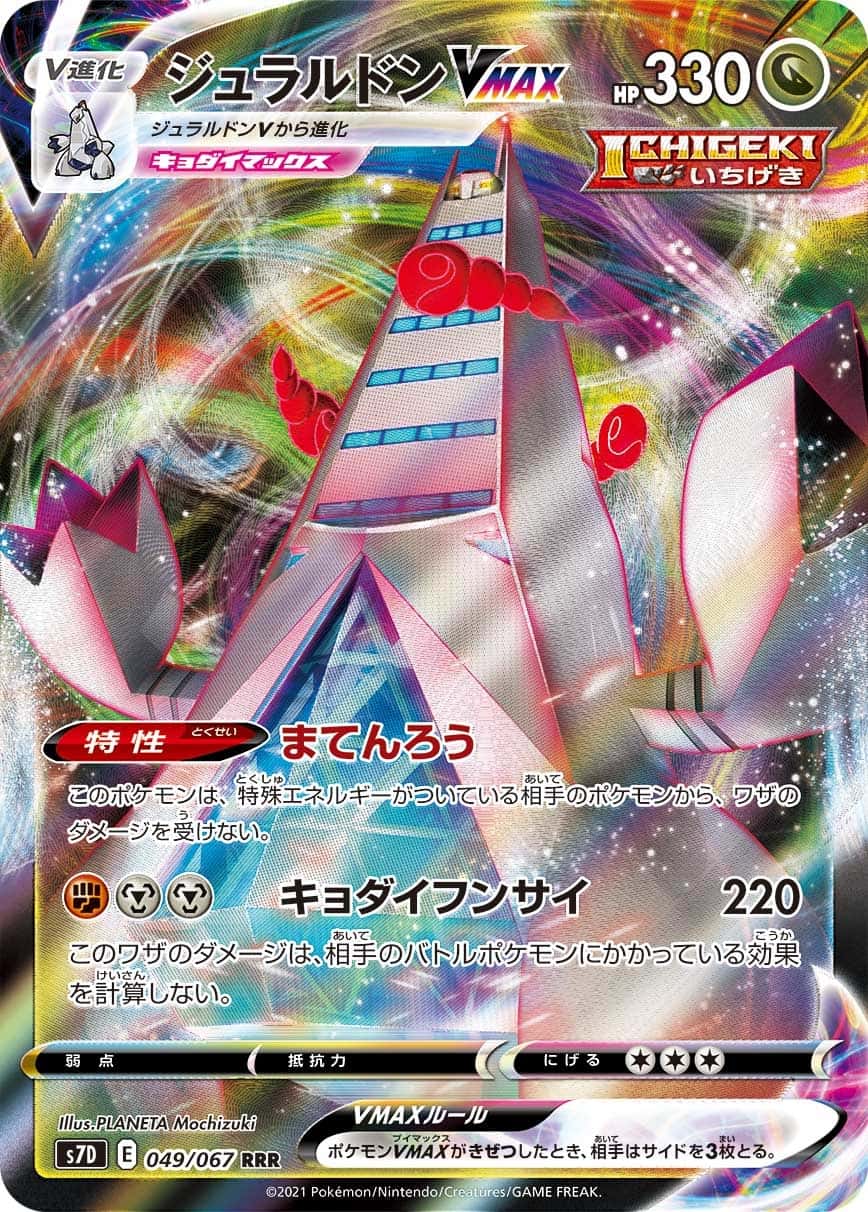 Some Pokemon look like cute animals and some Pokemon look like… um… skyscrapers?!?! Duraladon VMAX (Evolving Skies) seemingly fits into the latter, but that's not why it's on this list. While I couldn’t put it on a top-five list, I do think it is really close to a sixth or seventh place spot. Its Skyscraper Ability allows you to prevent all damage done to this Pokemon by attacks from each of your opponent’s Pokemon that have any Special Energy attached to them. That alone could propel it into a Decidueye (Darkness Ablaze) xZamazenta V (Sword and Shield) status that could certainly stop some popular Pokemon online decks. Off the top of my head, I know that Rapid Strike Urshifu VMAX (Battle Styles) wouldn’t have a bunch of options to get through since it mainly relies on Rapid Strike Energy (Battle Styles) and other decks, like Arceus & Dialga & Palkia-GX (Cosmic Eclipse) / Galarian Moltres V (Chilling Reign), because that deck relies on Aurora Energy (Sword and Shield). I’m sure there are plenty of other top Pokemon online decks that play Special Energy that you’ll run into, but that's not it with this card. It also has G-Max Pulverization does a solid 220 damage and goes through anything! That means you can swing through a Zamazenta V or Decidueye easily. That can save you valuable space in your list by not including cards, like Aegislash V (Vivid Voltage), and this card seems to have options in the format. 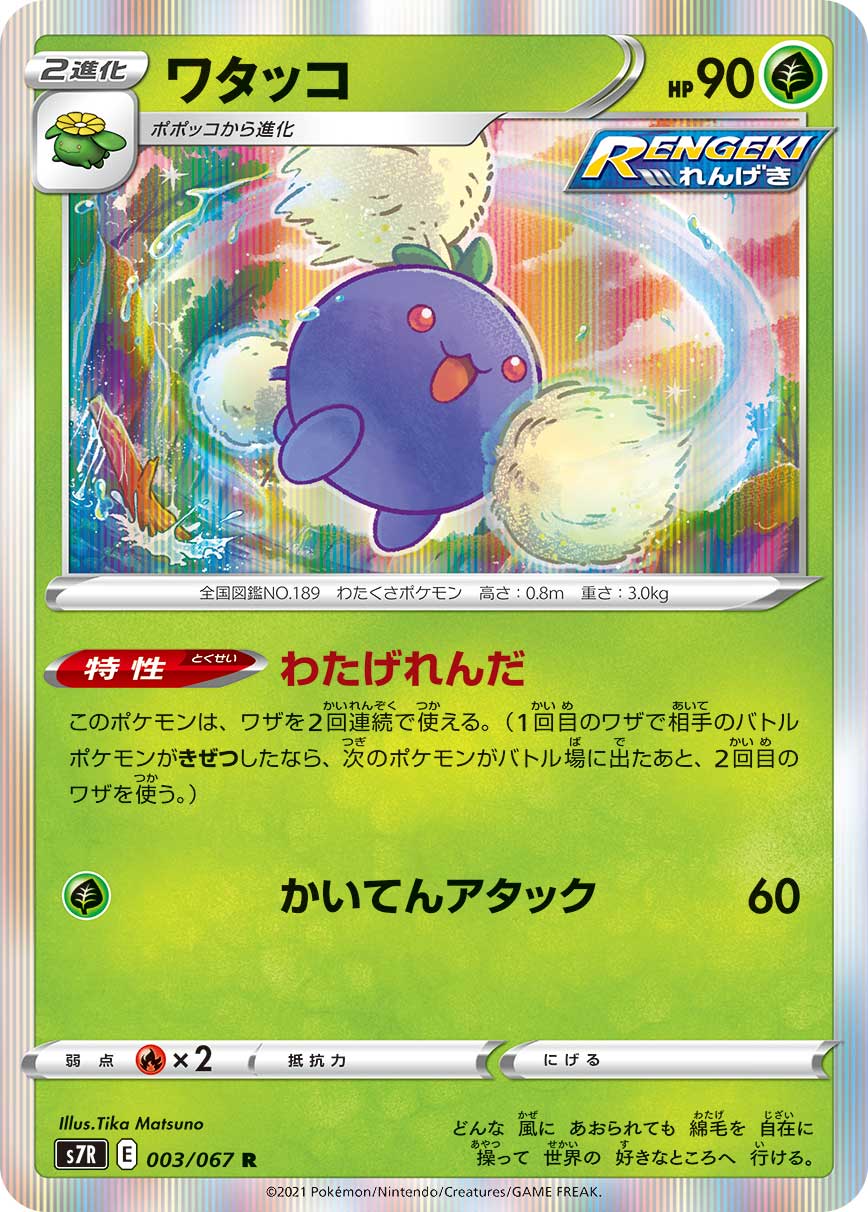 I’ll be honest, this inclusion is more of a pipedream, but this card seems super unique. Having the option to attack twice a turn or skip your opponent's turn is huge. We have seen how cards like Medicham V (Evolving Skies) can attack again and be viable or how even cards like Gengar & Mimikyu-GX (Team Up) can pause your opponent for a turn. Well, Fluffy Strike Combo allowing Jumpluff (Evolving Skies) to attack twice a turn is huge! Revolving attack isn’t anything special, but there are a few Rapid Strike Scroll Tools that can do more damage. Since the Rapid Strike mechanic brings us more of those tools each set, we might see this card actually take off. It's really one of those things where it is good when it's good and it's not if it doesn’t ever get support. But I would be crazy if I never included a card that can attack twice on a list like this.

I hope this article has been able to showcase some cards that many players would overlook and shine a light on why they are included here. These cards, and plenty more, can provide game-winning combinations once Evolving Skies officially releases on August 27. I look forward to creating content on this set, exploring the cards as a content creator, and sharing my findings with our community. Whether you are a collector or a player, Evolving Skies seems to find a balance in the middle that will make every single Pokemon fan happy! And like I said above, if you need to pick up anything from this set, PoTown Store has access to PTCGO codes for this set and many others! Take your game to the skies and evolve your collection!

Zach Lesage is a contributing writer for PoTown Store. As a Toronto local, he has been playing the Pokemon Trading Card Game since 2005 and creates Pokemon content as his full time career. Under the moniker of theloneblown, he creates YouTube content, streams on Twitch, and provides hot takes on his Twitter. With multiple prestigious accomplishments in the game, such as the 2020 Players Cup 2 Champion and the 2020 Oceania International Championships Finalist, he has proven his success in the game. Outside of the game, he travels the world, enjoys the culture of designer streetwear, and is a professionally trained chef. You can catch him at most Pokemon events and follow him on Twitter @ZachLesagePTCG.
SHARE THIS POST
Previous Post
Next Post