Why I chose the deck:

Well, choosing this Pokemon Online deck was something out of the blue. I always go for my trusted Blacephalon deck, but as the meta evolved with Battle Styles, I felt like Blacephalon was not a strong choice. PikaRom saw a huge increase in play, and Rapid Strike Urshifu VMAX lived up to the hype, and Mad Party was also performing successfully. Those were all bad matchups for Blacephalon, so I started crafting a deck that can beat the entire meta instead.

During my Player Cup 4 key qualifiers, I started playing Mad Party for 5 keys, Blacephalon for 2 keys, Rapid Strike Urshifu VMAX for 1 key and then decided that my win ratio was not the highest. So, I started creating an ADP Zacian list with Double Mawile GX, 4 Crushing Hammer, and 2Marnie. This disruptive take on ADP worked super well for me as I got countless wins and ended up with 116 tournament Reps thanks to that approach. I will talk about my matchups very shortly and why these keys cards that aren't in a typically ADP list worked out so well. 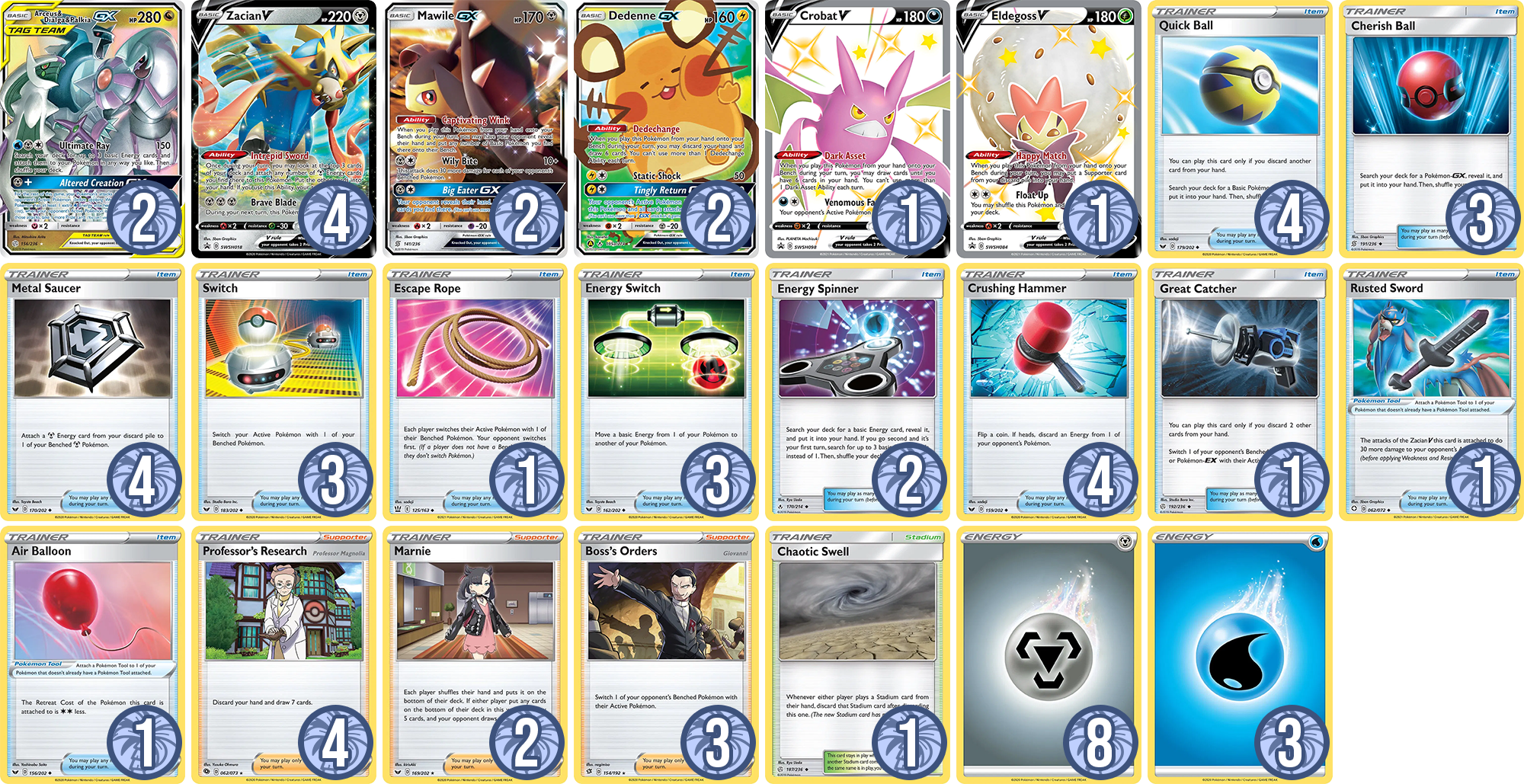 In my decklist, you will see that I went for some interesting choices. I already said I went for a more disruptive route with Hammers and Marnie and had no 4 Boss's Orders in my list. I just went for 4 Zacian V for the early game to ensure I could draw cards which is way better than the 3rd copy of Dedenne GX. Because starting with Dedenne GX will cost you a ton of games.
Also, with Double Mawile GX, you can always go for a turn 1 Mawile GX if you go first, which can cheese out games if the opponent has a Crobat V or Dedenne GX in their opening hand. Not only is Mawile GX great for its Captivating Wink ability, but it's also a nice, efficient attacker requiring only 1 Metal Saucer and an attachment of turn. Having more copies of Metal Type Pokemon also makes it easier to have a first turn Altered Creation GX as you can Metal Saucer more easily on turn 1.
I'd love a second copy of Chaotic Swell, but the double Marnie helped out against all the fire matchups too. It's basically a consistent ADP list that made room for Crushing Hammer by cutting into the 4th Boss, 3rd Dedenne GX, 2nd Air Balloon, etc...

The meta for Top 16 will still be Battle Styles meta and has the following decks:
7x Rapid Strike Urshifu VMAX, 2x MewMew Rillaboom, 1x PikaRom, 1x Tempo Zard, 1x LucMetal, 1x Eternatus VMAX, 1x Mad Party, 1x Munchlax Control, and of course me with ADP.
We were already able to defeat most of these decks, so let's hope things go well for me.
My thoughts on how the deck would change with Chilling Reign:
Well, there are 2 new cards that you could think about when it comes to Chilling Reign. 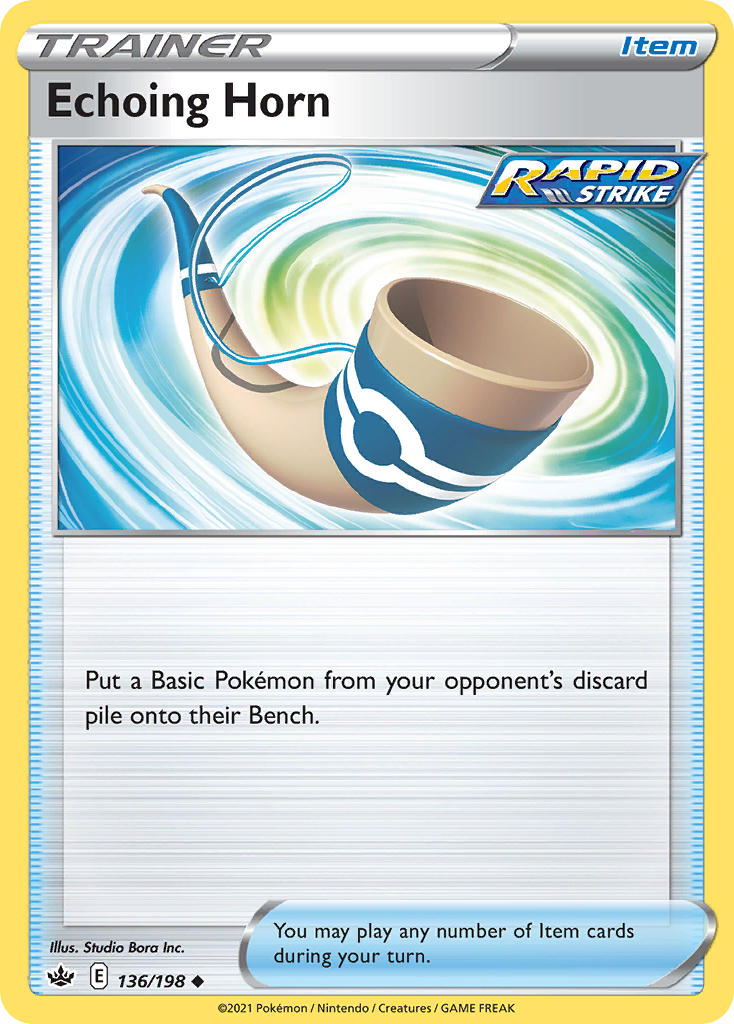 Echoing Horn: Allowing you to put a basic Pokemon from your opponent's discard pile onto their bench. This is perfect if you see a 2-prize support Pokemon in there. Or if you KO'd a Dedenne GX or Crobat V and want to KO it again :D
A definite 1-off maybe cut a Mawile GX for it. 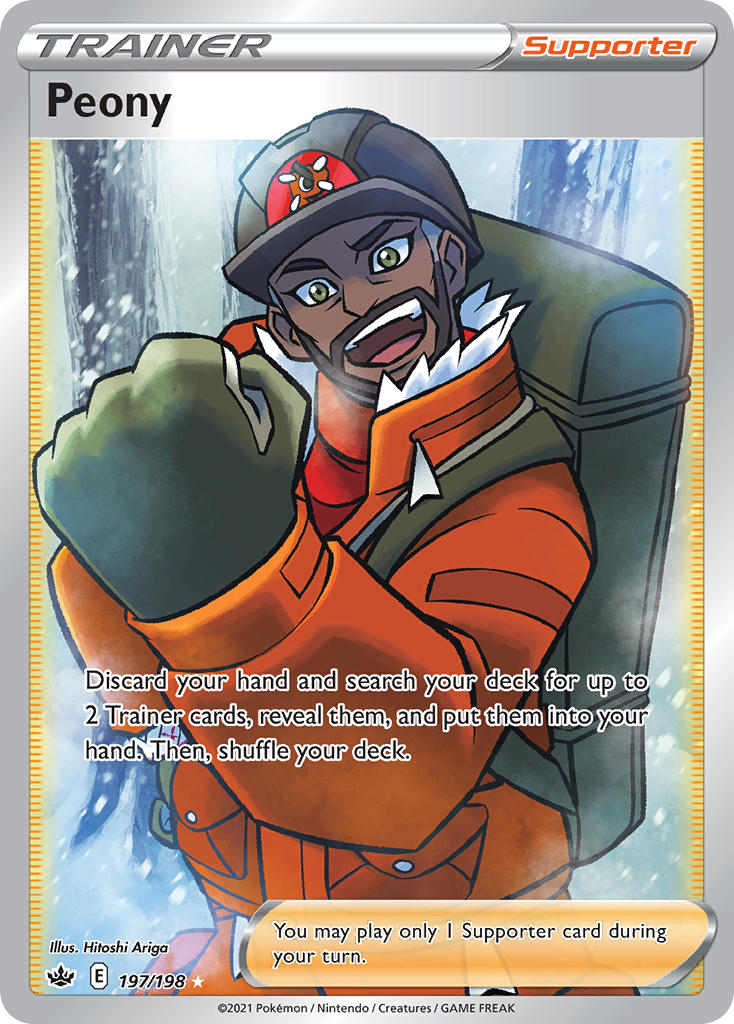 Peony: This supporter allows you to discard your hand and then search for any 2 trainer cards you want. This is perfect if you want to get a first turn Altered Creation GX going second with the help of Energy Switch and Metal Saucer. If you go for the Peony build, you will need to cut your Crushing Hammers for it, as you will also need 2 Kricketune V to build your hand back up. On the other hand, you will also get pretty weak to the new Path to the Peak so maybe think about adding a Resetting Hole Marshadow from Unbroken Bonds.
So Chilling Reign updates:
-4 Crushing Hammers
-2 Marnie
-1 Professor's Research
-1 Zacian V
-1 Mawile GX
-1 Switch
+4 Peony
+2 Echoing Horn
+2 Kricketune V
+1 Marshadow
+1 Air Balloon
And that's it for this Player Cup 4 report. As always, you'll hear all the latest updates on my YouTube channel: https://www.youtube.com/ZapdosTCG

Thank you all for reading through this article, and I hope you learned a lot about the insight information and strategies with ADP. Try out the deck for yourself. ADP is now available on the VS ladder, so be sure to use the most broken GX of all time. This was ZapdosTCG signing off, and I'll see you soon!
SHARE THIS POST
Previous Post
Next Post