Posted by Zach Lesage on 7/15/2021 to Articles
What’s up, PoTown Store readers? While everyone has been testing the heavily played concepts from Chilling Reign, such as Shadow Rider Calyrex VMAX (Chilling Reign), I’ve been looking under the rug for under-discovered concepts. My idea is that most of the community will create excellent lists for the best Pokemon Online decks, but the other decks that have potential from this new set won’t be as refined. This article will feature three underplayed concepts, strategies, and personal lists for each of them. These decks have a chance to change the metagame, take your friend by surprise in your next PTCGO match, and allow you to discover new strategies! Even if they don’t end up being too competitive, it's always a great idea to look at the different concepts that make up our game. So let’s check them out! 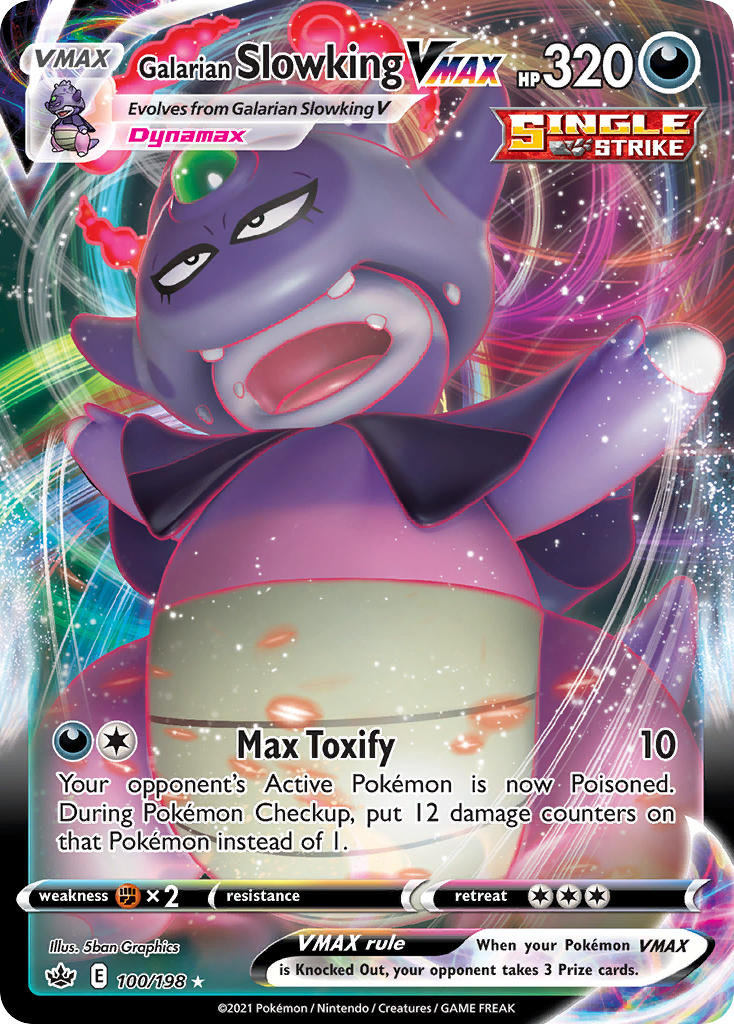 Upon first glance, Galarian Slowking VMAX (Chilling Reign) doesn’t seem like a playable card, but I think there is some hope for this deck. Max Toxify hitting for 10 damage and doing a 12x Poison for only two Energy is one of the most efficient ways to do that effectively. Other Pokemon, like Muk & AlolanMuk-GX (Unbroken Bonds), take three to four Energy to do a similar effect. The kicker here is that we can amplify both the damage and the Poison effect by playing Single Strike Energy (Battle Styles) and Toxicroak (Sword and Shield)! In a realistic situation, you can have two Toxicroak in play, have two Single Strike Energy attached, and attack for 16 damage from Poison in between turns and 50 damage to the Active. That’s enough to Knock Out a Zacian V (Sword and Shield) in one hit or take out a Coalossal VMAX (Vivid Voltage) going back into your turn. Sure, they might be able to play Switch (Sword and Shield), but you can always drop Path to the Peak (Chilling Reign) and play a Marnie (Sword and Shield) to slow down your opponent. The goal of being more damage efficient and increasing Poison is incredibly interesting so let’s check out this deck! 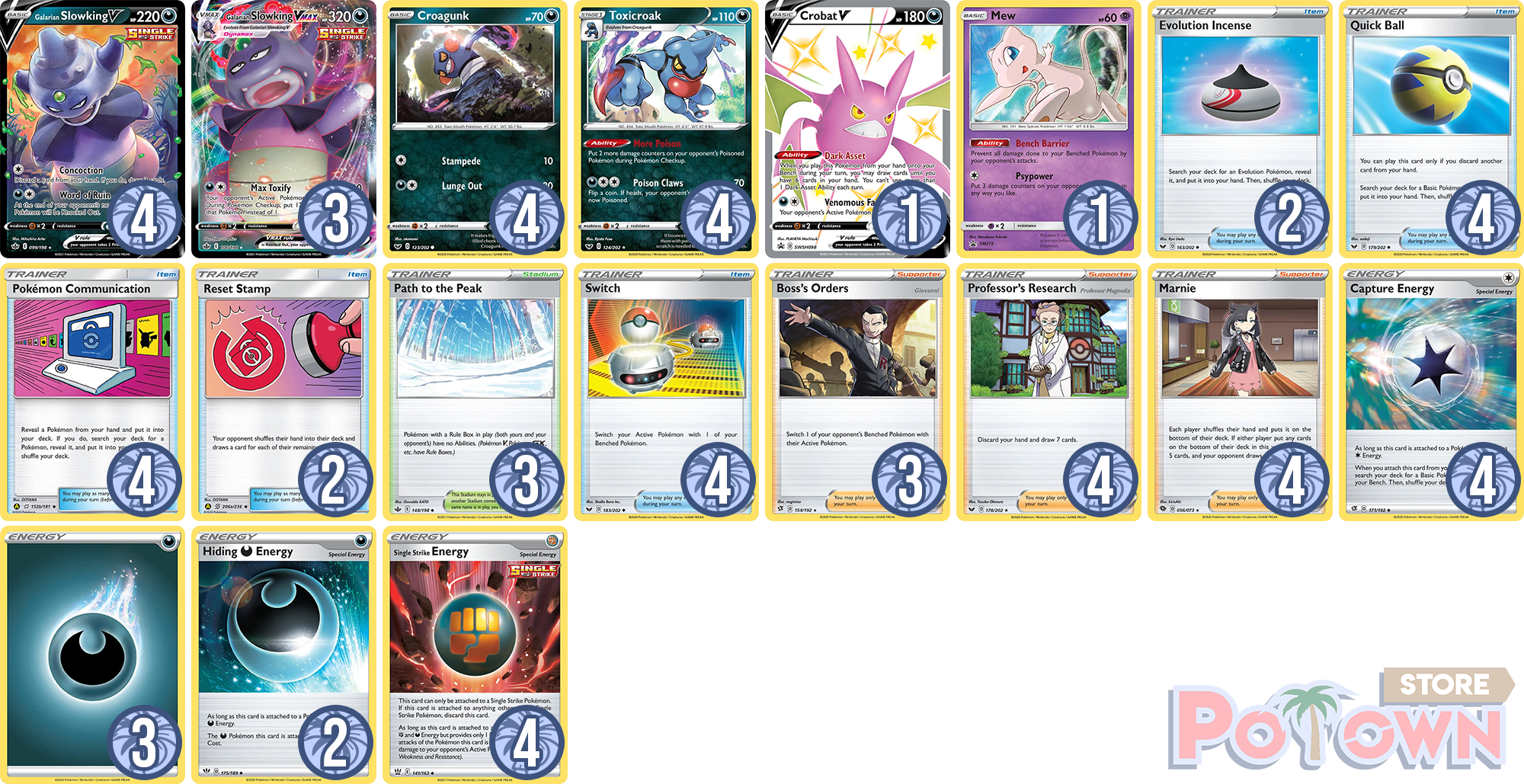 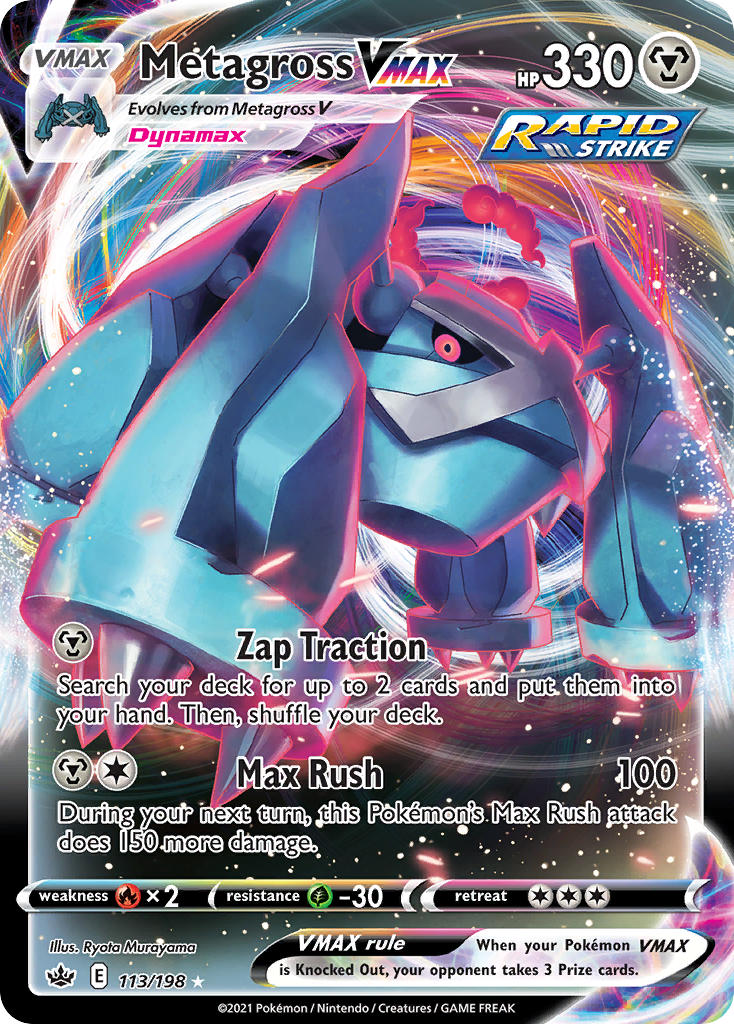 After discussing this concept with my friend Maddy Tate (@Chill_TCG), he sold me on this deck by saying that it's like Metal-type Victini VMAX (Battle Styles). I took that idea and ran with it! If you look at Metagross VMAX (Chilling Reign), its Max Rush attack does 100 for two Energy which is very similar to Victini VMAX’s Max Victory attack. Sure, you don’t get the extra boost against V Pokemon, but you get a 150 damage boost if you used Max Rush during your last turn. Both have their advantages and disadvantages with damage output, but they both pair extremely well with Galarian RapidashV(Promo) to get that extra damage from Libra Horn. Where Victini VMAX plays Welder (Unbroken Bonds), this deck plays Metal Saucer (Sword and Shield) and Bronzong (Battle Styles) to build up Energy in play. I like how Bronzong allows you to keep your Energy in play, allowing you to run cool techs, like Galarian Rapidash V and Zacian V, and still have the energy to move to Metagross VMAX. The spice in this deck comes from playing Cheryl (Battle Styles) because you can move your Energy, heal, and then move them back. This deck has been an experiment, to say the least, but it is worthwhile to test! Let’s peep this Pokemon Online deck list! 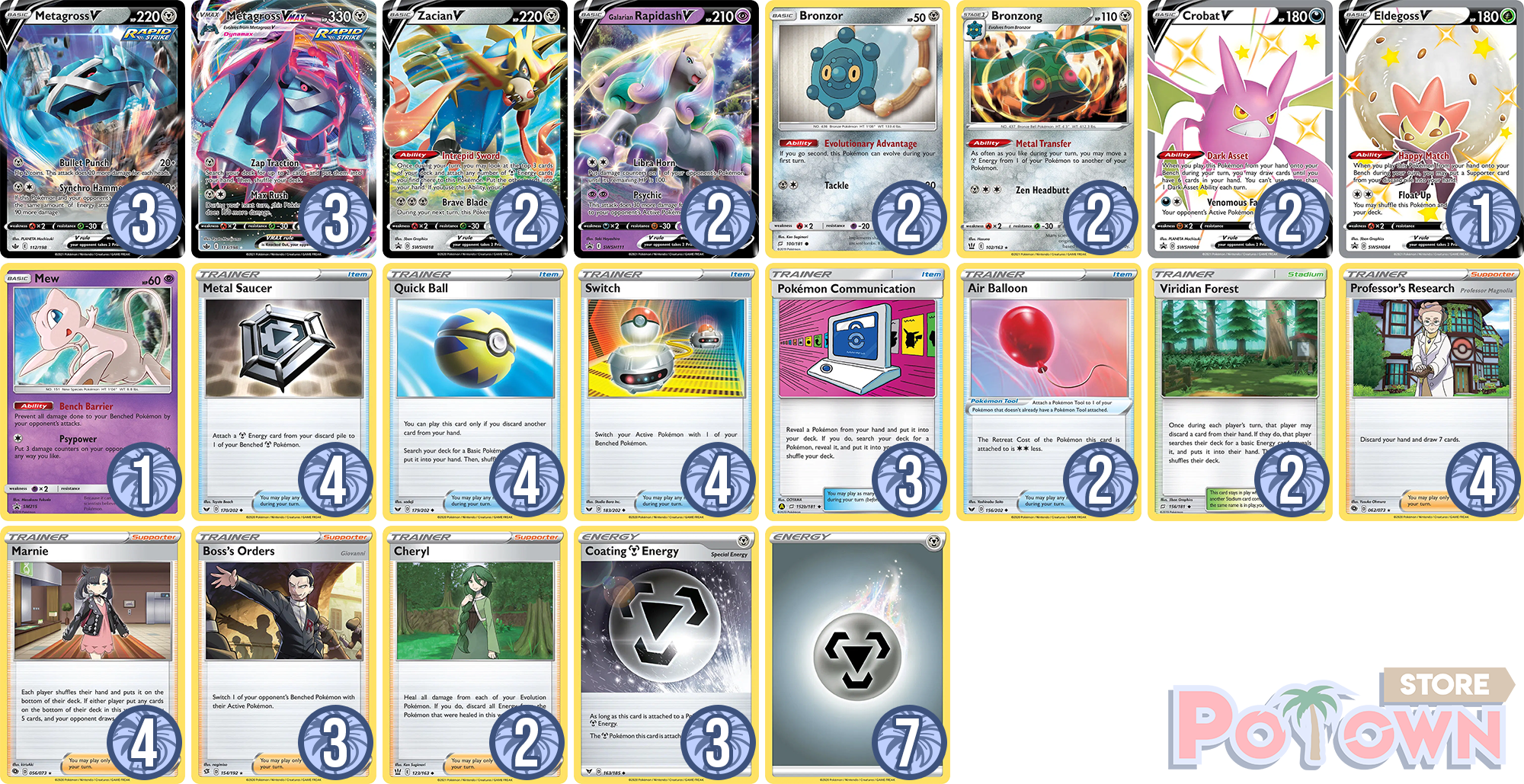 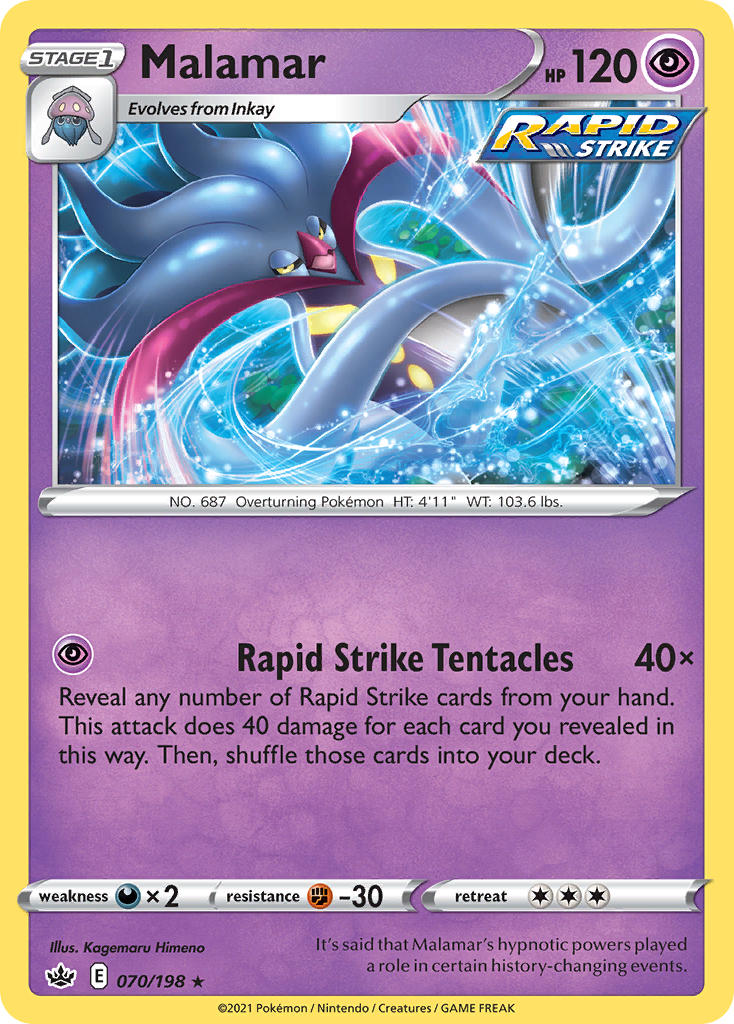 This deck has been a bit more popular than the rest, but it is still underplayed compared to other popular decks, like Ice Rider Calyrex VMAX (Chilling Reign). Malamar (Chilling Reign) is similar to Blacephalon (Unbroken Bonds) because you need to juggle sub-genres of cards to do extra damage to your opponent. You’re using Rapid Strike Tentaclesto revealRapid Strike cards from your hand to hit harder in this case. This list plays 24 Rapid Strike cards and has plenty of ways to search them out! You can grab them with Octillery (Battle Styles), shuffle-draw them with Bruno (Battle Styles), or search them out with Level Ball (Battle Styles). This deck has plenty of recovery, search, and the only goal is to take OHKOs with Malamar! It struggles at times and has issues that surface often, but the deck has the potential to be one of the best Pokemon decks! Let’s check out this list! 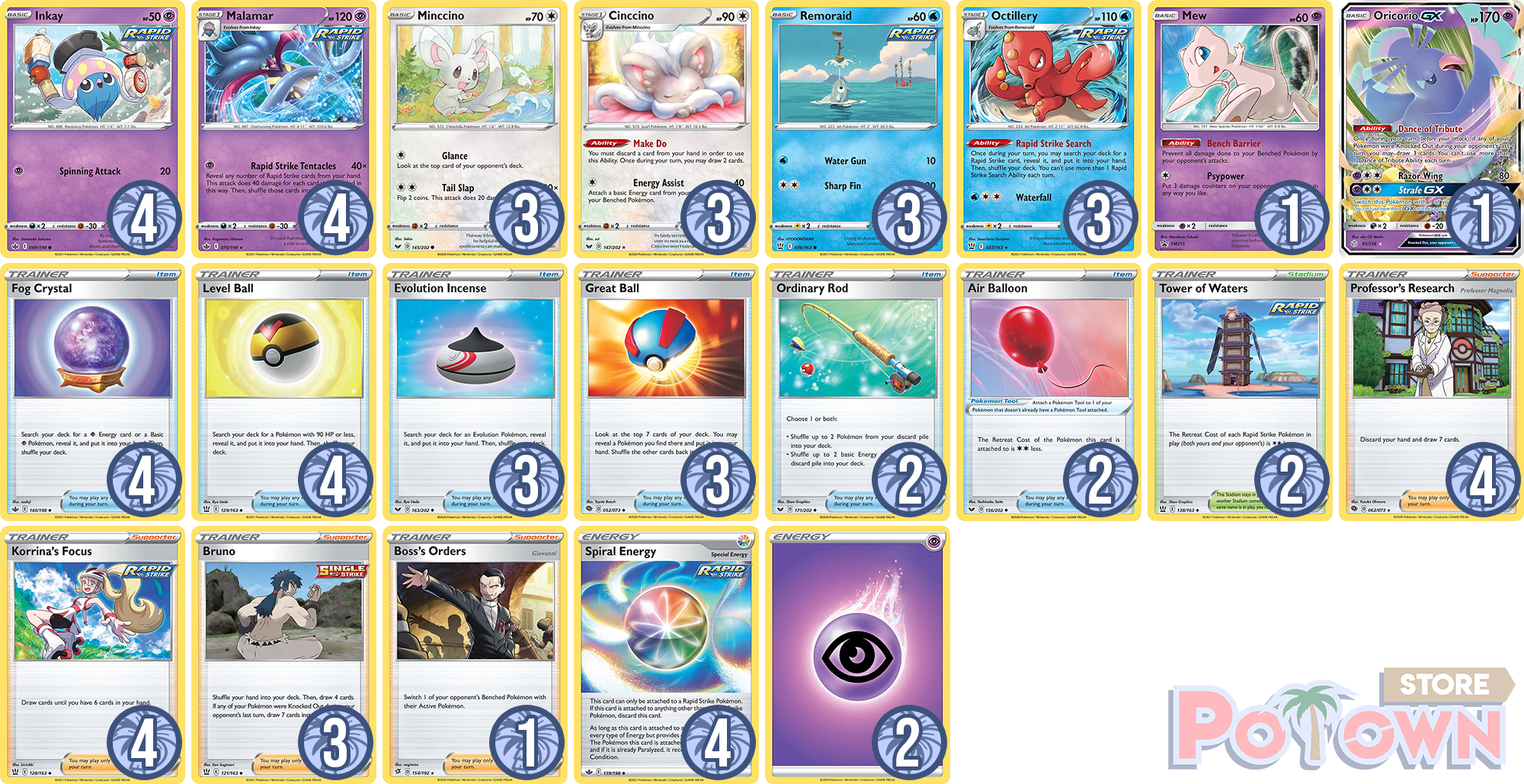 Whether you’re trying to become the next Chill TCG champion or play fun games on the Versus ladder, these underplayed Pokemon decks are a great place to explore for everyone! I’m stoked to continuously test these decks and learn more about the metagame myself! If you need any PTCGO codes for your own testing or collection, PoTown Store is one of the best places to pick up cards for PTCGO. happy testing! 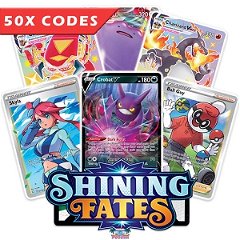