What’s poppin’ Po Town peeps? It’s ya boy Zach back with another article, and this one might just evolve your game! Evolving Skies, our newest Pokemon TCG Online set, has recently dropped, and I’m ready to feature some of the coolest Pokemon online decks to come out of that set. In this particular article, I will showcase some of the new “Eevee”-Lution VMAX Pokemon and how they can be incorporated into Team Up - Evolving Skies Standard decks! This will be a two-part article, so stay on the lookout for my next article that will go over the remaining “Eevee”-Lution Pokemon that weren’t covered here. If you are looking for any PTCGO codes to pick up these decks or any loose cards needed in your collection, there is a great selection here at PoTown store. That being said, let’s jump into these awesome new cards!

Espeon VMAX (Evolving Skies) doesn’t seem like much at first, but it finds a comforting home in my Shadow Rider Calyrex VMAX (Chilling Reign) deck. I basically cut Alcremie VMAX (Champions Path) to find the space and the deck looks refined! The idea is that your opponent will likely have a lot of Energy in play, just look at Weavile-GX (Unified Minds) “Dark Box” decks, and you can swing hard with Max Mindstorm. You don’t get the advantage of having a Pokemon with a Weakness to something other than Darkness-type, but you keep more Energy in play which is strong for Max Geist. The basic strategy is to use Underworld Door to stockpile Energy into play and attack with the best attacker for any situation. Let’s check out this list! 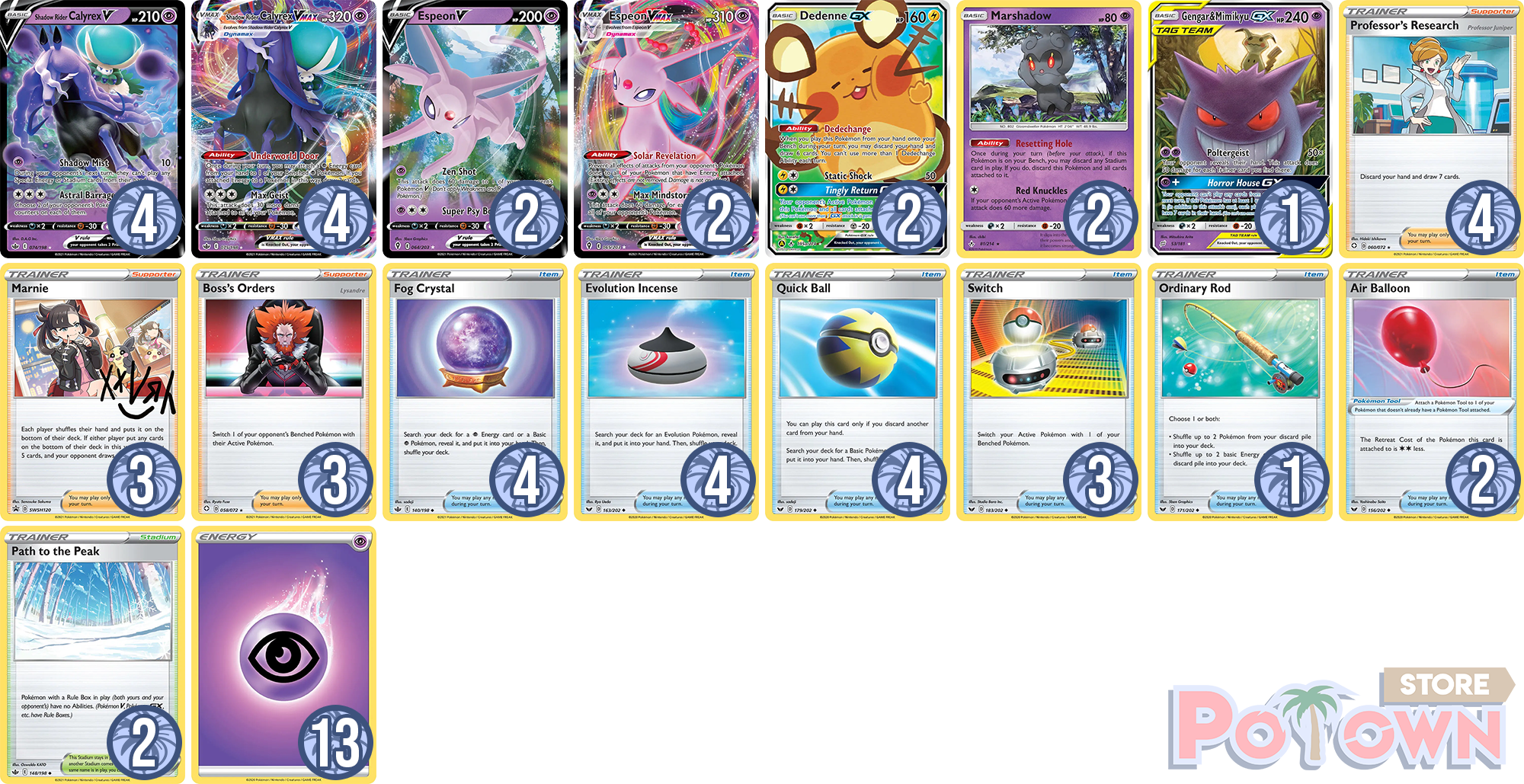 Flareon VMAX (Evolving Skies) is an awkward card - yeah, I’m gonna be brutally honest here and let you know I was scratching my head for a while. After discussing this card with my teammate Gabriel Smart (@GabrielSmartTCG), we thought of a cool way to abuse Max Detonate! By increasing the Fire Energy count to 18, yeah - that many, we can hit bigger numbers more consistently with Flareon VMAX. Since we are discarding a lot of Energy, Volcarona V (Evolving Skies) really comes in clutch with Surging Flames to recycle all of them back. We also decided to throw a few Ninetales (Team Up) in the deck for good measure because we can gust up whatever we want! Let’s check out this list! 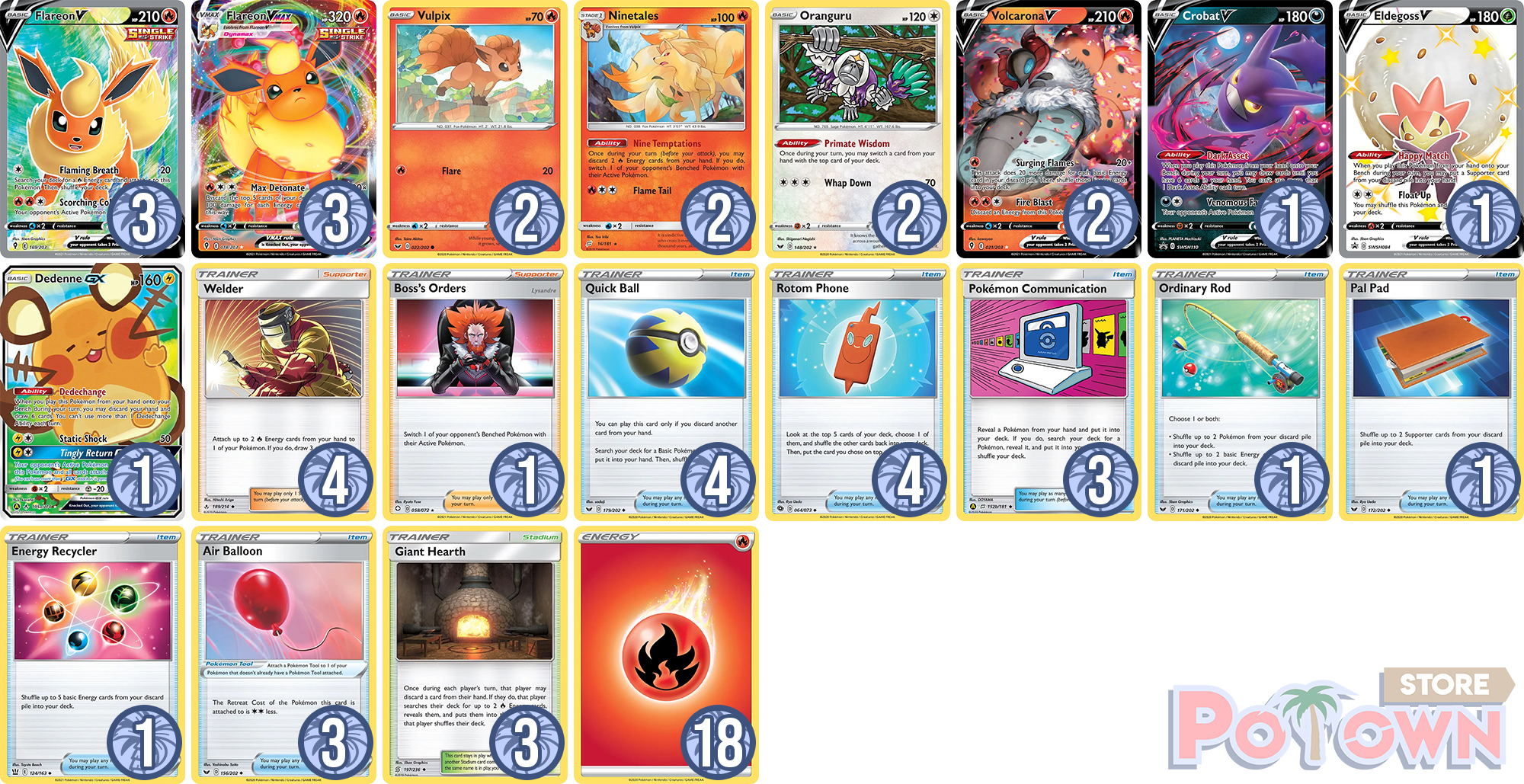 I hate to say it, but I’m not a huge fan of Glaceon VMAX (Evolving Skies)...yet! The issue that I’ve been trying to tackle is that Tag Team Pokemon run rampant in the Team Up to Evolving Skies Standard format. Umbreon & Darkrai-GX (Unified Minds), Reshiram & Charizard-GX (Unbroken Bonds), and Arceus & Dialga & Palkia-GX (Cosmic Eclipse), just to name a few! This deck does well against most VMAX decks, but that becomes a little bit easier once Pokemon-GX rotates out of our format in early September 2021. The goal of this deck is simple: build up Glaceon VMAX, try and wall against VMAX Pokemon, and use Quick Shooting with Inteleon (Chilling Reign). If you ever get the opportunity, you can slap down Medicham V (Evolving Skies), power it up with Melony (Chilling Reign), and take another turn with Yoga Loop. Let’s peep this list! 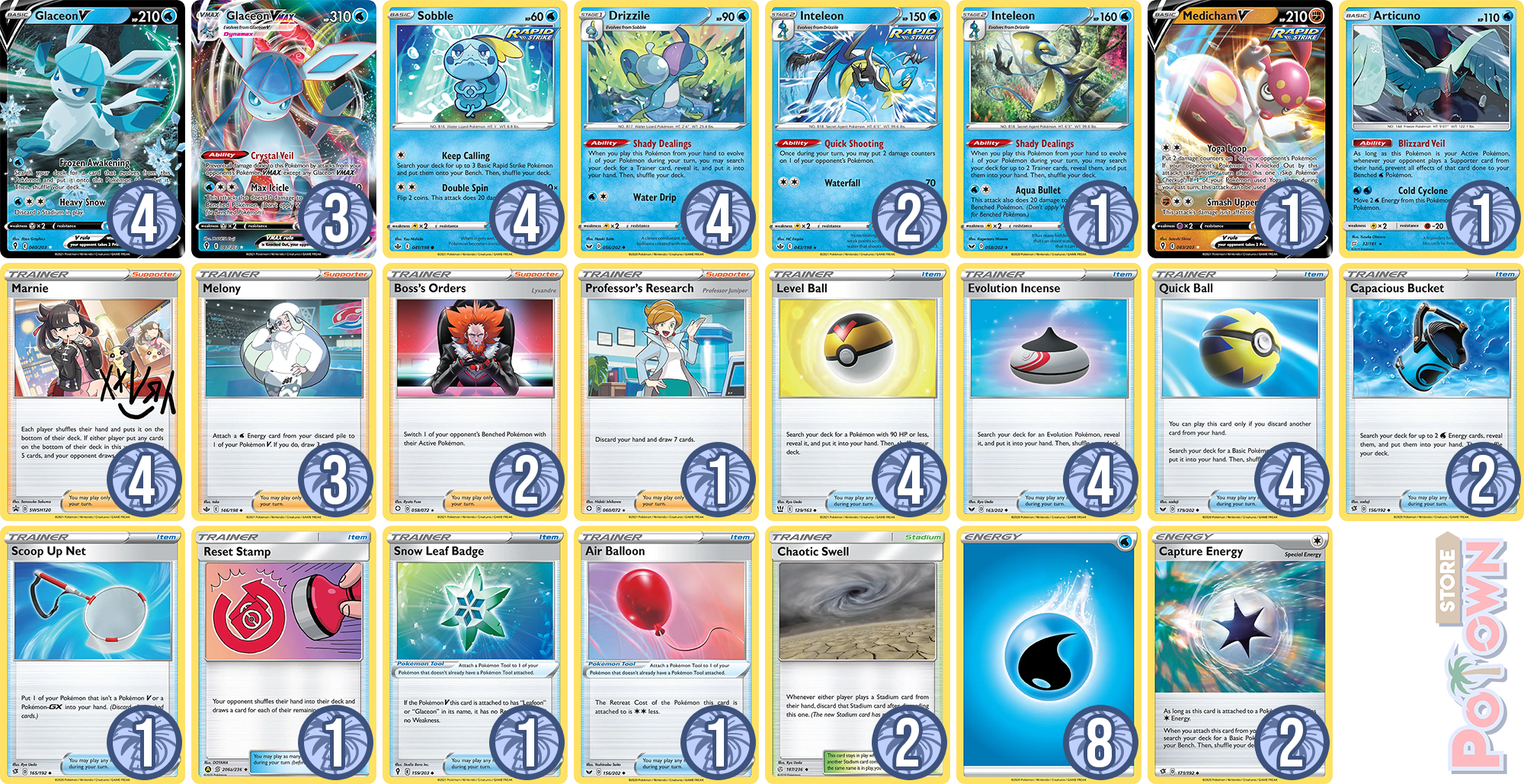 Umbreon VMAX (Evolving Skies) is arguably one of the most hyped cards from the entire set, and for good reasons, it has a built-in Boss’s Orders (Shining Fates) into its Dark Signal Ability. The extra bonus is that it has the Single Strike stamp on it, so it works great with other Single Strike cards, like SingleStrike Urshifu VMAX (Battle Styles) and Houndoom (Battle Styles). The goal of this deck is to decide on the best-attacking type for each matchup, either Darkness-type or Fighting-type, power up that Pokemon with Houndoom, and hit for a lot of damage quickly. Strategies like this have been successful for the entirety of the game, and I think this deck truly has potential. Shoutout to Vinicius Fernandez (@Vincius01763096) for coming up with this original concept. Let’s check it out! 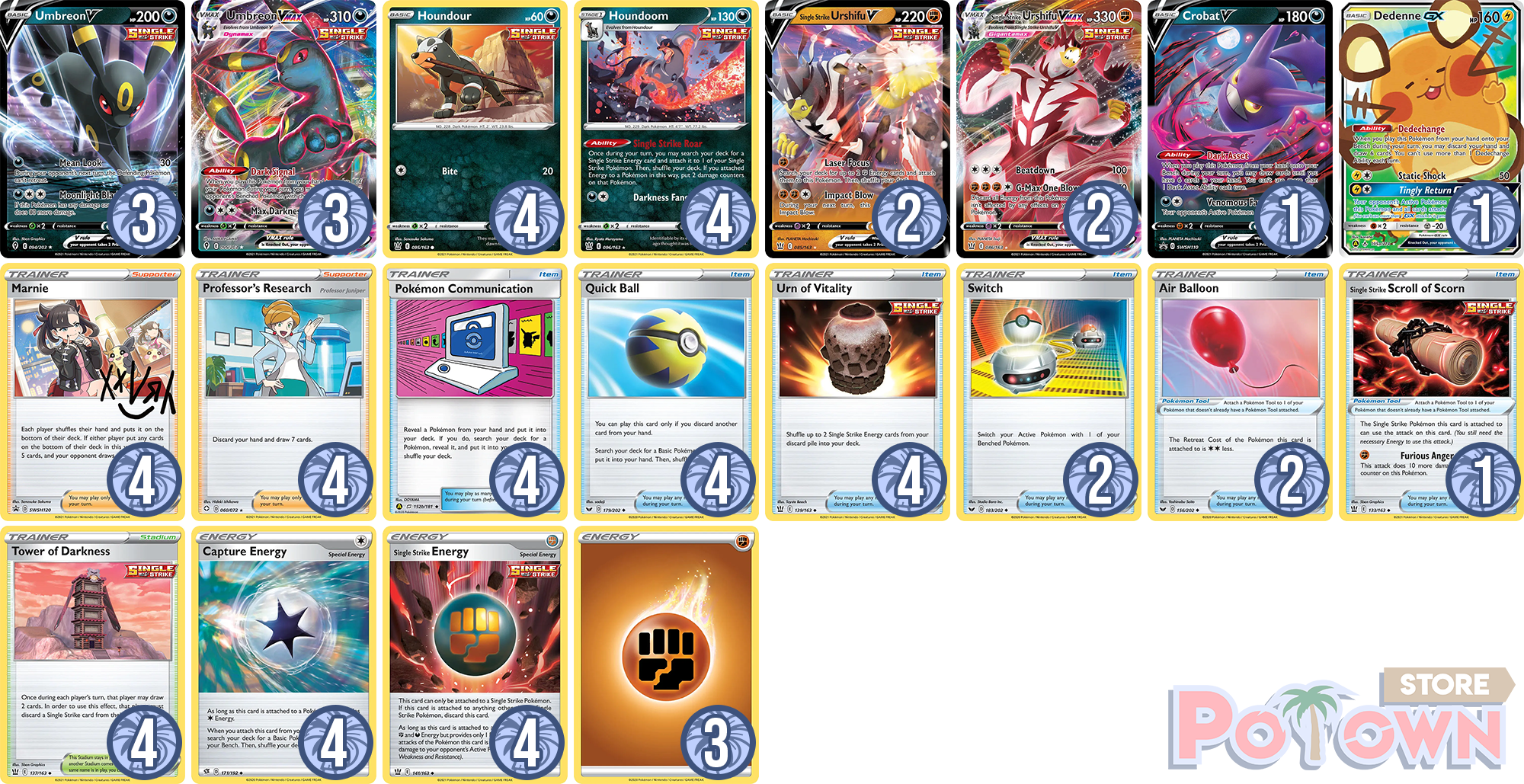 Evolving Skies is truly a set where competitive players, deck builders, and collectors can combine their passion for the game! Some ideas are going to be slightly more viable than others, but the goal for this article is to provide solid lists for each “Eevee”-Lution Pokemon released in this set. Like I said earlier, be sure to stay on the lookout for the other part of this article to check out all of those lists too! And as always, if you need any PTCGO codes, you’re in the right place! PoTown Store has a great selection of codes, including Evolving Skies, and you can get a head start on completing your decks!

Zach Lesage is a contributing writer for PoTown store. As a Toronto local, he has been playing the Pokemon Trading Card Game since 2005 and creates Pokemon content as his full time career. Under the moniker of theloneblown, he creates YouTube content, streams on Twitch, and provides hot takes on his Twitter. With multiple prestigious accomplishments in the game, such as the 2020 Players Cup 2 Champion and the 2020 Oceania International Championships Finalist, he has proven his success in the game. Outside of the game, he travels the world, enjoys the culture of designer streetwear, and is a professionally trained chef. You can catch him at most Pokemon events and follow him on Twitter @ZachLesagePTCG.
SHARE THIS POST
Previous Post
Next Post 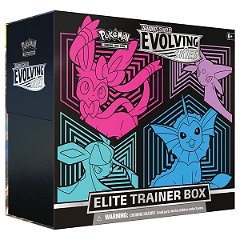