Posted by Elena from Gaia Storm on 8/18/2021 to Deck Lists
Hello everyone! This is Elena from Gaia Storm TCG, and it feels great to be here with you once again. Even if Chilling Reign has already been legal for some months now, the meta still finds ways to reinvent itself with the appearance of surprise strategies that can turn things around. And precisely, today’s article is going to focus on one of the funniest and most original Pokemon online decks I’ve discovered in a while, featuring none other than Bronzong from Battle Styles. The deck has been gaining a fair amount of attention during the last couple of weeks, being able to actually hold its ground against many of the current top-tier strategies. It’s been so long since we had a real toolbox deck that proved worthy of the top places of the metagame ladder so let’s see in detail the potential it contains!

What is a toolbox strategy?

For the sake of clarity, I feel a quick explanation about the concept of a toolbox deck will be useful for newcomers to the world of trading card games. This idea typically refers to strategies with multiple types of resources available during the game, so, depending on what they are facing, they can easily switch their game plan in one direction or another.
I have to admit that I am not entirely unbiased when it comes to Toolboxes in Pokémon TCG. In fact, one of the decks that I hold very dear to my heart was 2014’s Aromatisse Big Basics from the XY Era (sights, am I that old?), a very simple but effective concept that revolved around the ability to move fairy energies across the field and use different attackers depending on the opponent defending Pokémon’s type. And that is exactly how Bronzong works.

First introduced in Battle Styles and then reprinted in Chilling Reign in a stunning shiny version, Bronzong allows the player to move metal energies around freely. At first sight, this might sound good but not very scalable (running just Metal Type Pokémon does not offer much variety against the metagame) until we remember that Aurora Energy is in the format. Suddenly a whole new world of possibilities opens. 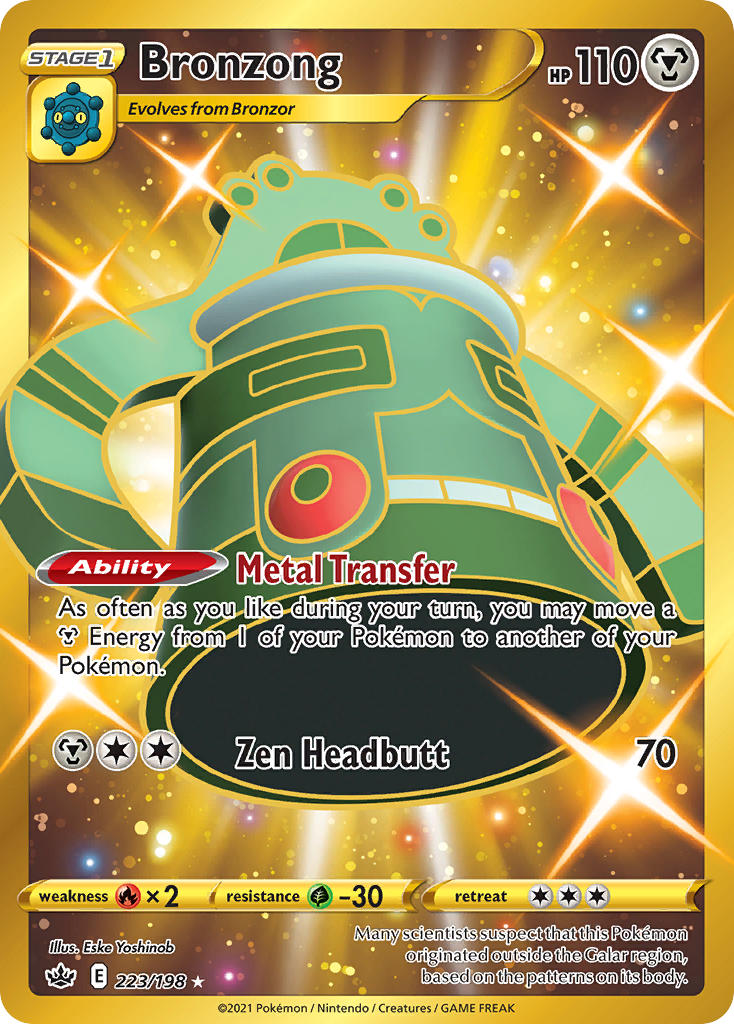 Therefore, the idea of the deck is to abuse Metal Transfer and benefit from all the different available big V Pokémon and exploit the weaknesses dynamic in the game.
It will be easy to understand the power of Bronzong Toolbox by looking at the sample list below: 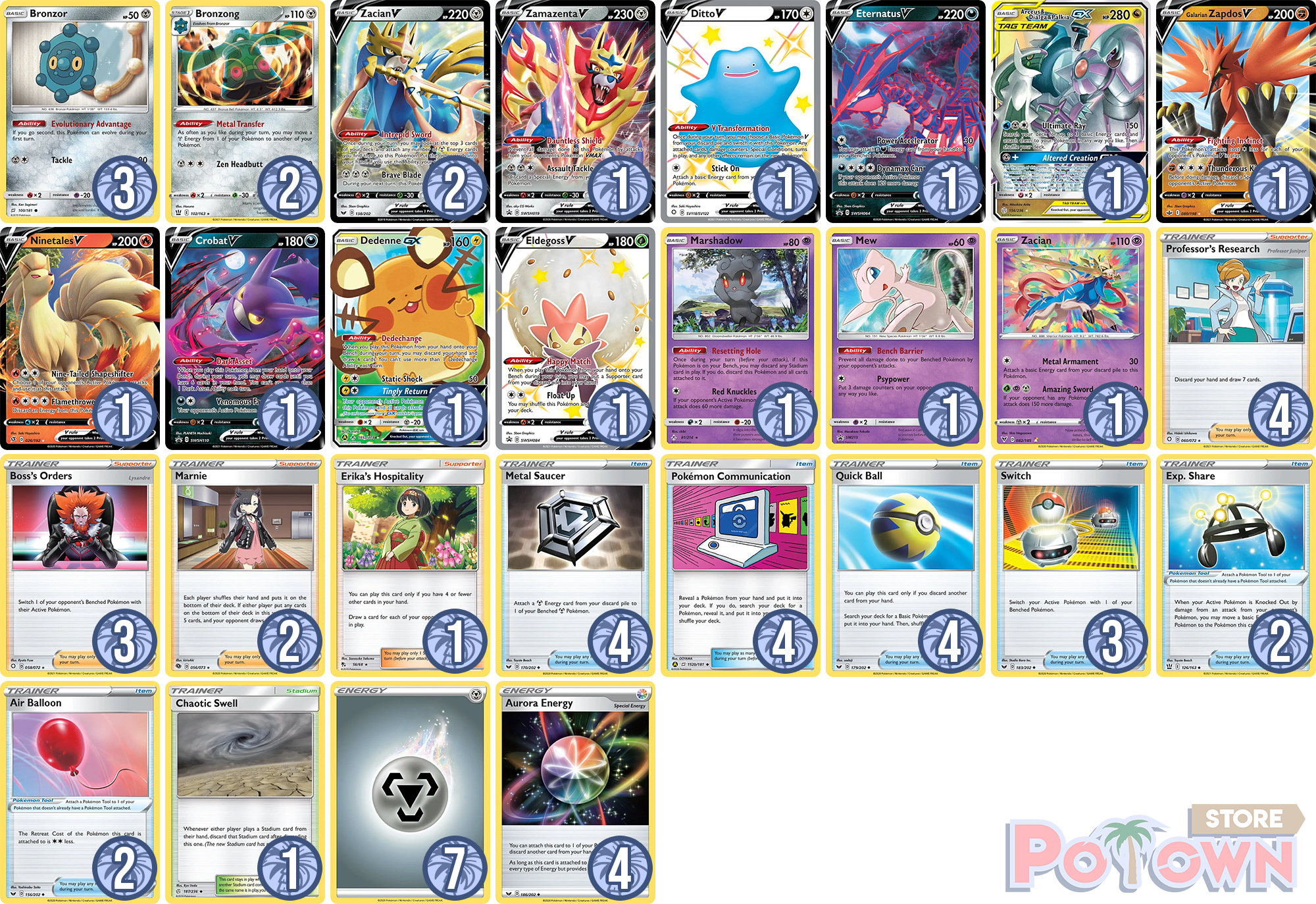 In general terms, your goal will be to set a Bronzor and Zacian V in the first turn of the game in order to start getting the engine going. After that, a flexible Pokémon lineup will ensure there are strong answers against any match-up you run into, thanks to the typing coverage. Let’s take some quick examples:
Another thing that I especially like about this toolbox deck is how powerful it becomes if you can use Arceus Dialga Palkia GX move in your second turn of the game, boosting your attackers and making sure you can finish the game in just a couple of hits. 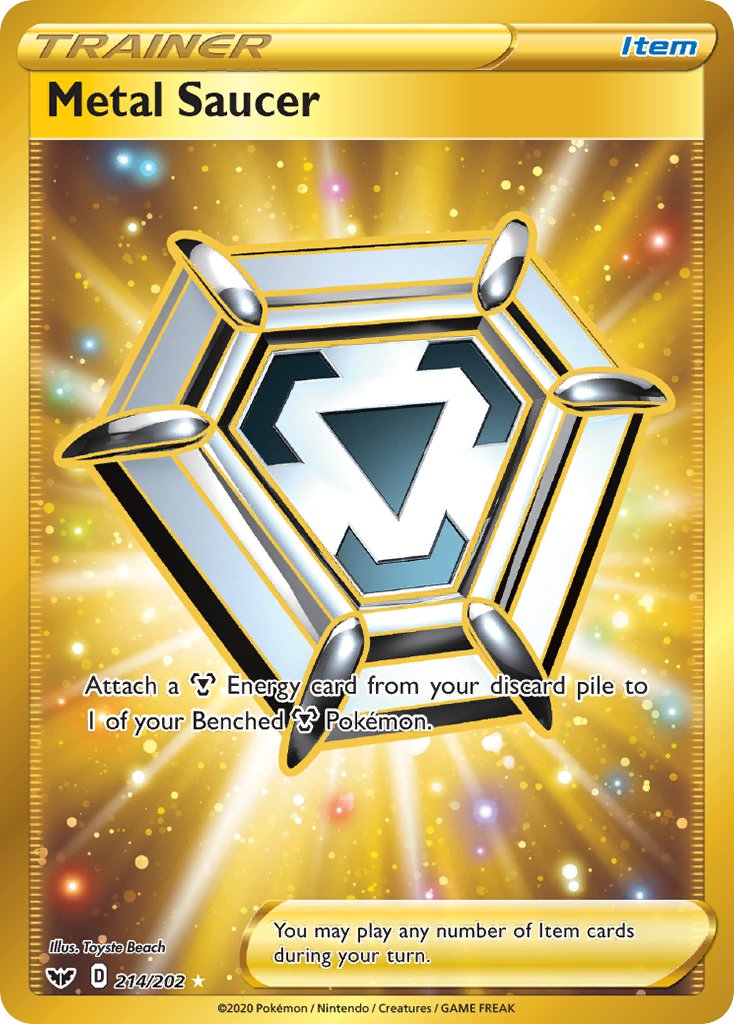 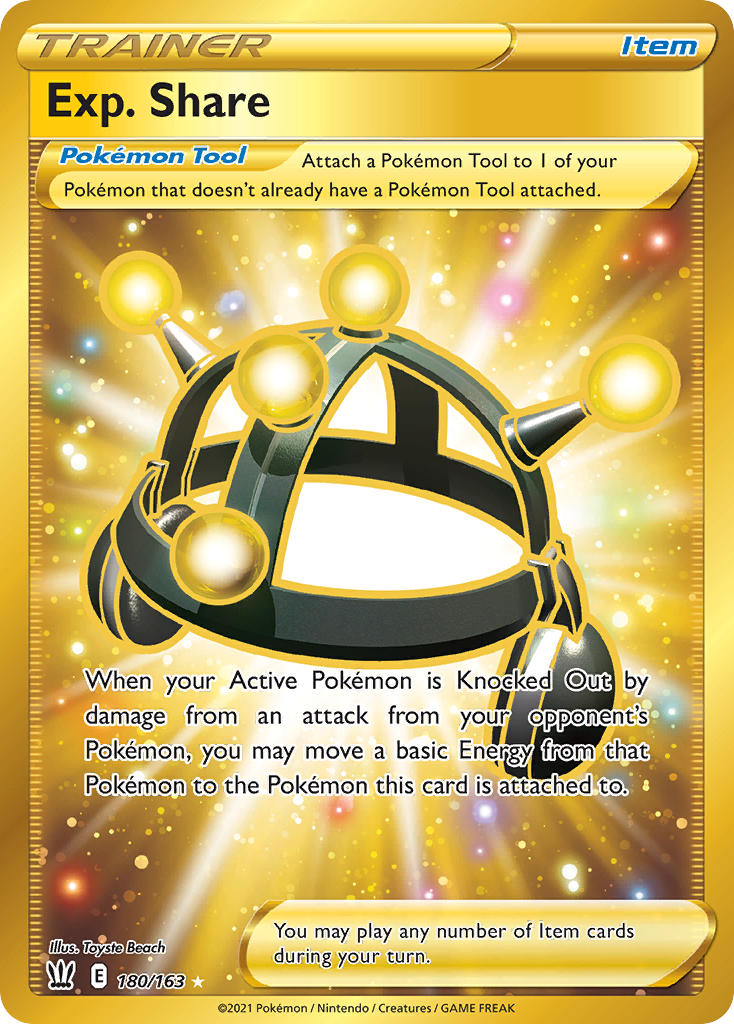 But the deck's success does not only rely on its capacity to run a rainbow of attackers. Metal Saucer and Exp Share are two items that provide Bronzong with speed and recovery that can completely lead to a comeback. And remember that you can always use Ditto V to re-use one of your fallen attackers for a second time during the game!

Identifying the right game plan and when to use each of your attackers will be key for a successful run in a tournament but so will be building the perfect Pokémon lineup. The list provided above is designed to fight the most popular strategies of the current metagame. Still, if you feel that some elemental types are missing (like water or grass) or you expect to be paired against a very concrete strategy, you can always adjust the Pokemon cards to include.
Another important thing I would like to point out is that getting the cards you need for the deck is actually quite straightforward as the majority of the Pokémon you will be using have been released as promo versions over the past few months. So, instead of getting some PTCGO codes and using them to trade, you can directly acquire the promo versions here!

I like the deck because it has a good shot against most of the decks in the game as long as it can be set up properly in the first turns and does not price key attackers.
This applies well against strategies that rely on big VMAX Pokémon like Shadow & Ice Rider Calyrex and Eternatus. However, Shadow Rider Calyrex is a bit more challenging because they can block you one turn with Gengar Mimikyu and then take down your Bronzong in the second turn with Boss Orders.
Playing against ADP, another popular Pokemon online deck choice, is more a race than anything else. The game normally goes for the player that can use the GX move first, so it really depends on who starts and whether your opponent can find a Saucer + Energy switch to respond.
The one clear bad matchup is Fire, basically because the deck runs no water-type Pokémon to deal with a Victini VMAX. Luckily for Bronzong and its teammates, Victini has radically decreased its popularity during the past couple of months, so it is not something you will run into very often. Lastly, we have Urshifu. Although winnable, being able to call the coin flip right and getting Mew in the field to protect your Bronzong is absolutely crucial, but even so, in my experience, it is a complicated pairing.
Moving forward and looking past the rotation (September this year), the deck truly loses nothing except for a couple of cards like Marshadow and the stadium Chaotic Swell so it should theoretically still be viable. I think its success will heavily depend, as it always happens, on how the meta reconfigures itself with the arrival of new cards and whether the new Dragon cards (immune to weakness) will or not prevail.

After having tested the deck for a few days and seeing how far its dynamics can go, there are only a couple of weaknesses worth mentioning that I’ve found. The first one is that it sometimes struggles with the set up, especially if you start, and the second is when you price one of your key attackers against a very concrete pairing (e.g., Pricing your only Zapdos against Eternatus VMAX). But apart from that, it can
So, if you are looking for a cool and different deck to play for the remaining time of the season (or even to climb the Pokémon TCG ladder!), give an opportunity to Bronzong, and you won’t regret it! Thanks for reading!