Tower Over the Competition!

What’s poppin Po Town readers? It’s ya boy Zach and I’m here to share my newest findings from our Fusion Strike Pokemon TCG metagame! The deck we’re gonna look over together is Duraludon VMAX (Evolving Skies), the Skyscraper Pokemon! I often make jokes about this Pokemon being part Dragon and part hotel, but it is 100% a valid choice nowadays! This deck focuses on using it’s Skyscraper Ability to prevent damage done by your opponent’s Pokemon that have Special Energy attached. Looking at the other top decks in the format, Jolteon VMAX (Evolving Skies), Mew VMAX (Fusion Strike), and Single Strike Urshifu VMAX (Battle Styles) all play Special Energy in their deck. Think about it for a second… Rapid Strike Energy (Battle Styles), Capture Energy (Rebel Clash), Fusion Energy (Fusion Strike), Single Strike Energy (Battle Styles), and Speed Lighting Energy (Rebel Clash) are all heavily featured in the top decks right now! So if you want an interesting choice that can handle the metagame, Duraludon VMAX can seemingly handle it all. If you need any of the cards to build this deck, be sure to pick up some PTCGO codes from the PoTown store to get quick access to codes. To start things off, let’s look at the list that really sparked things for this deck! 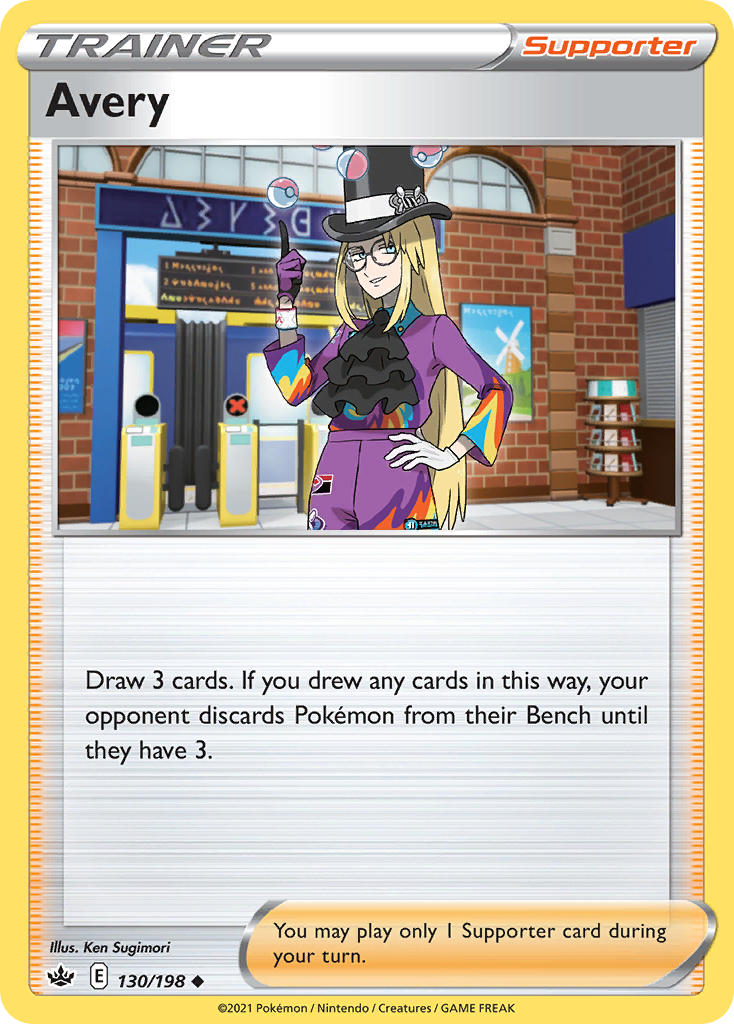 A few weeks back at the Liam Kidd #2 Event, pro player Grant Manley (@tricroar) was able to take down the entire event with Duraludon VMAX! A similar list has been floating around for a while online, but Manley changed a few cards up to better suit the metagame. It also seemed that this was the point that the metagame came together instead of being a jumbled-up mess since Fusion Strike was just released. Sometimes a deck is actually a great deck, but it isn’t ready for the metagame, and this seemed to be the case with Duraludon VMAX. Even though the core of this deck has been around weeks prior, the time just wasn’t right. Anyways, Manley won the 100+ player event and this new Duraludon VMAX deck hit the scene. Let’s check it out! 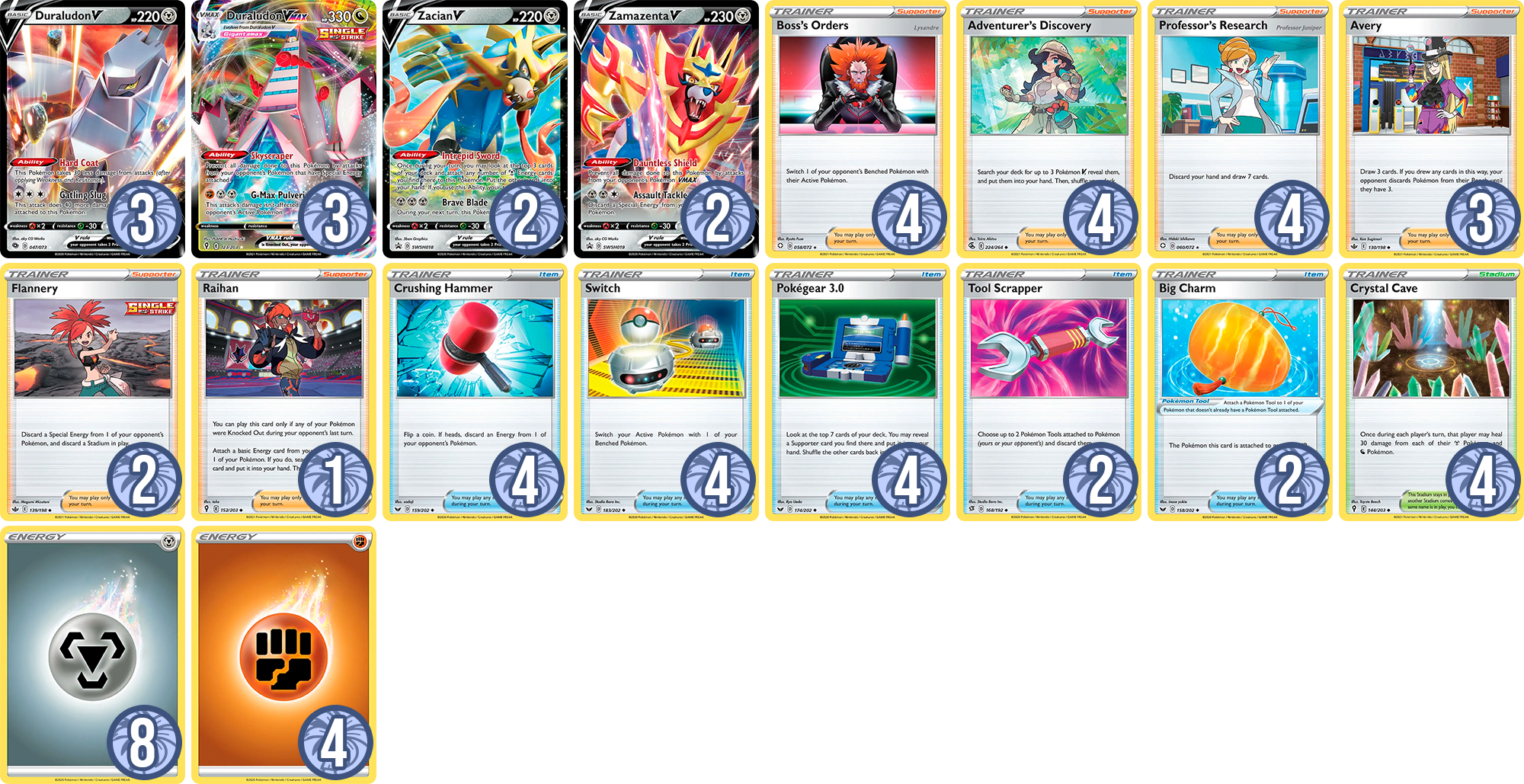 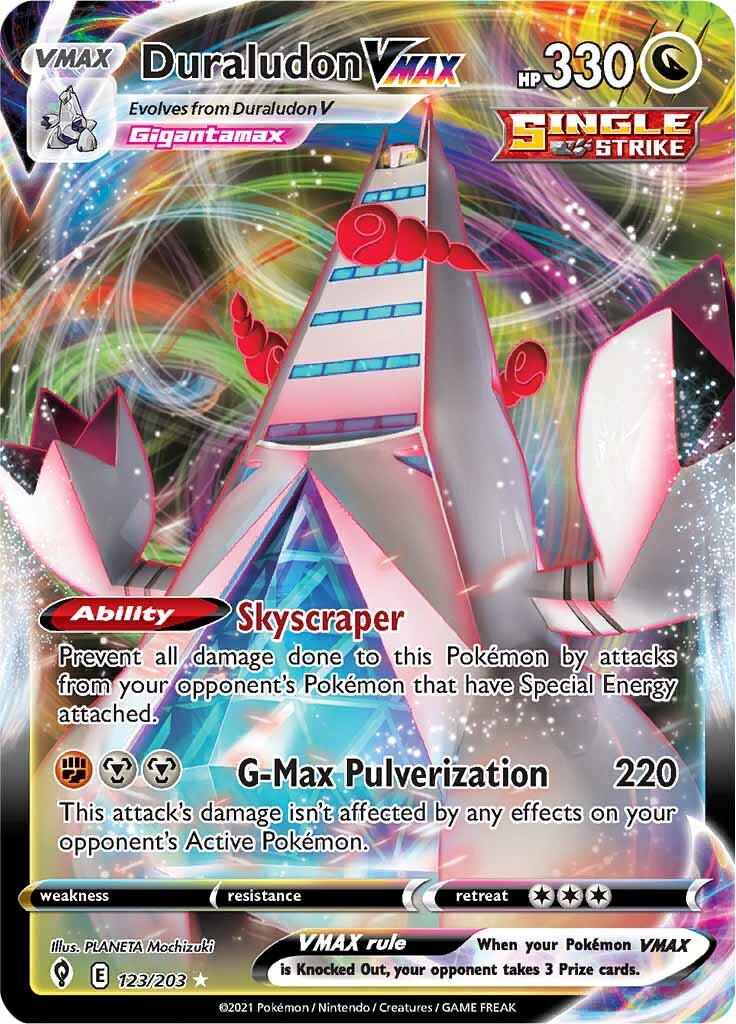 The goal of this deck is to wall off your opponent’s Pokemon with Duraludon VMAX’s Skyscraper Ability while forcing them to draw as many Prize Cards as possible. My ideal setup is one Zacian V (Sword and Shield) to draw cards with Intrepid Sword and two Duraludon VMAX to a wall with Skyscraper. Sometimes it's easier to wall with Zamazenta V (Sword and Shield) against some VMAX pokemon online decks, but I often find it as a just-in-case strategy. While you use Intrepid Sword each turn, you play cards like Crushing Hammer (Sword and Shield) to slow down your opponent’s setup and use Crystal Cave (Evolving Skies) to heal your Duraludon VMAX to stay alive longer. Crystal Cave also works as a great counter to Path to the Peak (Chilling Reign) which is one of the best ways to get around Skyscraper. Flannery (Chilling Reign) isn’t there to discard Special Energy, but it is instead used to discard Stadiums. If you do need to discard a Special Energy, try to keep the Skyscraper in mind. While it might be difficult to make decisions throughout the game, you need to manually attach three Energy to a Duraludon VMAX and use G-Max Pulverization to attack your opponent's Pokemon. If you have a choice to attack certain Pokemon with Boss’s Orders (Shining Fates), try to Knock Out Pokemon without Special Energy attached to keep Durlaudon VMAX standing throughout the game. 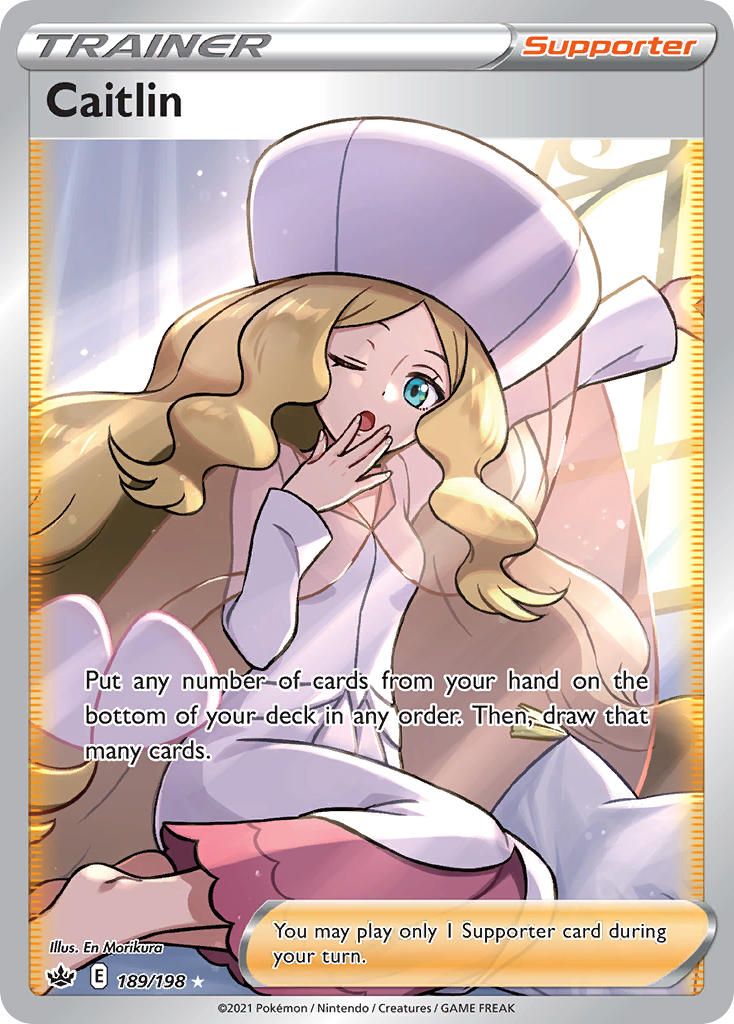 While Manley’s list is great, I feel there could be some room to change things up a little bit. I’ve never been a huge fan of Avery (Chilling Reign) because drawing three cards a turn seems a little too slow for me. I understand that discarding Benched Pokemon can be beneficial against decks like Suicune V (Evolving Skies), but that deck has been slipping down the rankings. I’ve replaced it with Caitlin (Chilling Reign) to potentially draw more cards and cycle unusable cards to the bottom of the deck. With Duraludon VMAX using Zacian V as its primary draw engine, Caitlin can dig far into the deck, and Avery doesn’t seem as notable as it was before. Doing some more changes, I decided to cut Zamazenta V from the deck completely since I don’t think it matters in this current metagame. The top decks in the metagame are as follows: Mew VMAX, Jolteon VMAX, Single Strike Urshifu VMAX, Zacian V, Duraludon VMAX, Rapid Strike Urshifu VMAX, and a few random decks here and there. Zamazenta V is great against a few of these decks, but Duraludon VMAX stops them already with Skyscraper. This leaves a few extra spots open for other tech cards, such as Energy Switch (Sword and Shield), that allow you to abuse Zacian V’s Intrepid Sword to accelerate Energy to Duraludon VMAX throughout the game. I don’t want to necessarily say this build is definitely better than Manley’s, but it has been working well for me in testing! Let’s check it out! 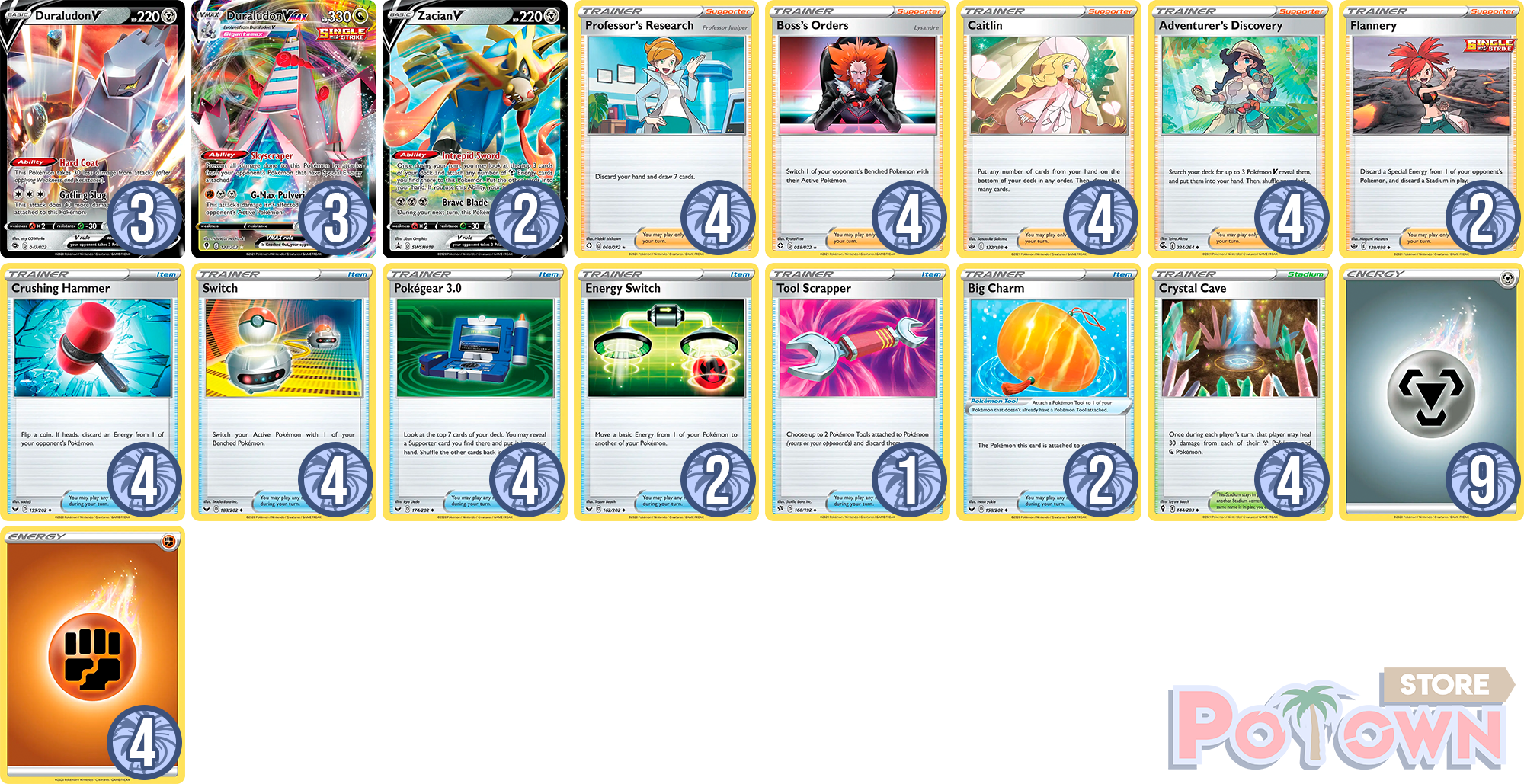 After explaining why Duraludon VMAX is relevant now, the strategy, the updated list, and more - it has been a wild ride of an article. I hope my findings will guide you on your Pokemon TCG journey as I try my best to help our community understand our Fusion Strike metagame. Duraludon VMAX is a particularly strong deck in this format and should have answers to almost all decks in the format (as long as they have Special Energy). It’s certainly a deck that I want to test around with more and I hope it continues to be one of the best decks in the format! If you’re missing any cards for this deck or any other deck, feel free to pick up some code cards right here at the PoTown store. Super quick PTCGL code card email delivery with every purchase and it helps support the articles written here. Best of luck testing this deck and have a great day!

Zach Lesage is a contributing writer for PoTown store. As a Toronto local, he has been playing the Pokemon Trading Card Game since 2005 and creates Pokemon content as his full-time career. Under the moniker of theloneblown, he creates YouTube content, streams on Twitch, and provides hot takes on his Twitter. With multiple prestigious accomplishments in the game, such as the 2020 Players Cup 2 Champion and 2020 Oceania International Championships Finalist, he has proven his success in the game. Outside of the game, he travels the world, enjoys the culture of designer streetwear, and is a professionally trained chef. You can catch him at most Pokemon events and follow him on Twitter @ZachLesagePTCG.
SHARE THIS POST
Previous Post
Next Post