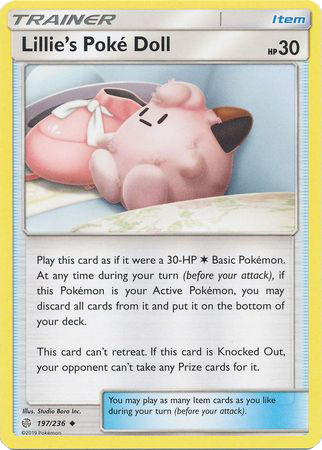 You may be wondering what exactly this deck is and how it works as a good Pokemon TCG deck considering it doesn’t seem to attack every turn due to it’s one of energy card count, and the 4-0-4 line of Florges from Forbidden Light that has never seen competitive play until now. What this deck attempts to accomplish is similar to Stall decks we have seen throughout the course of the Pokemon TCG, stop your opponent from taking all 6 prize cards and run them out of cards in their deck to win by deck out. This deck attempts that stall strategy by abusing the new powerful Item card from Cosmic Eclipse in Lillie’s PokeDoll. This card counts as a regular Pokemon when you put it on your bench, except your opponent does not get to take any prize cards. You recycle these Lillie’s PokeDoll’s every turn thanks to Florges and Munchlax who with a coin flip, can put a card from your discard pile on top of your deck. This gives you infinite access to your PokeDolls, and stops your opponent from ever taking 6 prize cards. You can win within the 50 minute margin by constantly using Bellelba & Brycen-Man and Lusamine to get it back every other turn, to speed up the process of your opponent decking out. Doll Stall is quite a simple strategy when compared to other decks in the Pokemon TCG, but when luck goes your way it can be one of the hardest decks to beat.
SHARE THIS POST
Previous Post
Next Post