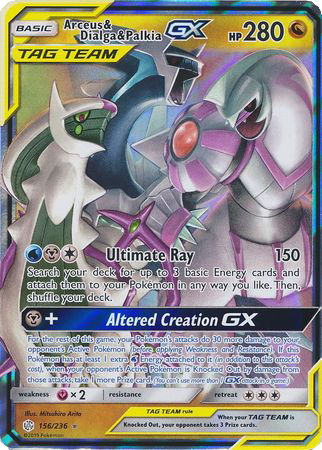 The newest Tag Team trio Arceus & Dialga & Palkia GX made its debut performance in LAIC this weekend, and it lived up to all the hype with its huge showing at LAIC! ADP (short for Arceus, Dialga, Palkia) has the best GX attack in the game in Altered Creation GX which gives you an effect for the rest of the game that not only adds 30 extra damage to your attacks, but it also takes an extra prize card on every knockout you take! ADP also has an amazing first attack that is similar to the once popular Pikachu & Zekrom GX in Ultimate Ray which can set up some additional back-up attackers in Keldeo GX, Lucario & Melmetal GX, and another ADP if you need to. Since the GX attack speeds up the amount of prizes you take per knockout, you can win games before your opponent can even set up their board to deal with all of your powerful, set up Pokemon GX. This deck is one for the ages, and because of its fantastic GX attack, it is in contention to be one of the best decks in the Pokemon TCG format.
SHARE THIS POST
Previous Post
Next Post