Posted by Jack Millar on 12/1/2020 to Articles
Hello, it’s Jack, back again for another article! This time I will be going over the new set, Vivid Voltage. Vivid Voltage is an extremely interesting set, containing new Amazing Rare Pokémon and a very high number of new cards. I will be looking at this set by going over what are, in my opinion, the top 5 most playable cards from the set. But before that, there are more than 5 good cards here so ill must go over some honorable mentions first. 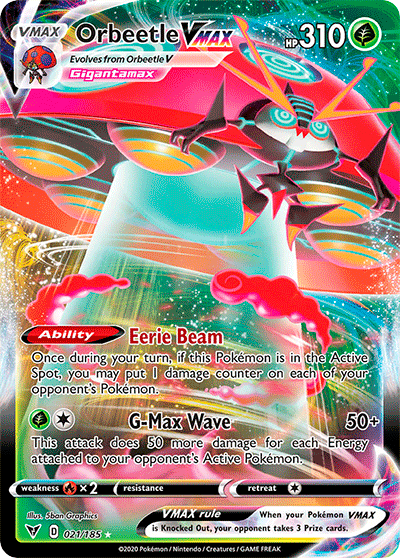 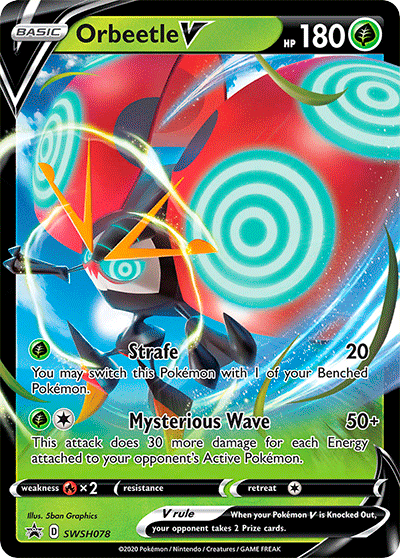 The first card that will be looked at has a very interesting ability. While the Orbeetle V is a little lackluster, Orbeetle VMAX has the ability Eerie Beam which places one damage counter on all the opponent’s Pokémon if Orbeetle VMAX is active. This is reminiscent of the card Roxie, which combined with Weezing and Koffing from CEC had a very similar effect. Orbeetle VMAX also has an interesting and potentially devastating attack which scales for more energy attacked to the opponent’s active Pokémon. While this might not take one hit knockouts, the residual damage can be easily cleaned up by multiple uses of Eerie Beam in combination with Zigzagoon SSH and Scoop Up Net. An Orbeetle VMAX deck will be trying to use as many Eerie Beams as possible and will try to consistently activate 2-3 per turn which can clean up a lot of the smaller Pokemon such as Zigzagoon SSH in Eternatus VMAX decks or the new Jirachi very quickly. However, Orbeetle VMAX is a little slow when compared to cards like Zacian V or Eternatus VMAX. Because of this I’m not sure how playable Orbeetle VMAX will be right now, but watch out for this card in the future, that ability is powerful! 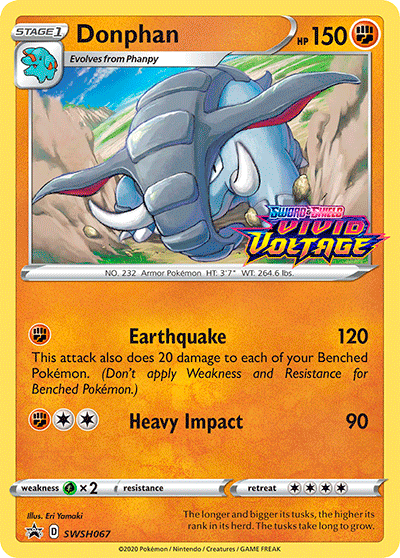 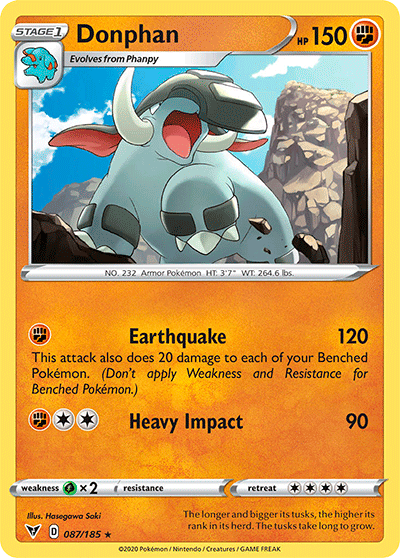 Donphan is very similar to another card, Excadrill CEC which has seen a recent surge in popularity. I think Donphan has a lot of potential in the current standard format now. Fighting is an important type to hit right now with Eternatus VMAX being a major deck and the resurgence of Pikachu & Zekrom GX which makes Donphan a strong option. However, the real strength of this card lies in its “drawback”. With the Phanpy from this set dealing more damage for each damage counter it has on it as well as having Spiritomb UNB from the past. A clear strategy can be formed where you attack with Donphan in the early game and later can sweep with Spiritombs and Phanpys that have their hp boosted with Cape of Toughness. Unfortunately, this deck might not have the speed or power required to be a top contender in the current standard format, given that it requires multiple turns to fully set up a Phanpy or Spiritomb but Donphan still has potential, nonetheless. 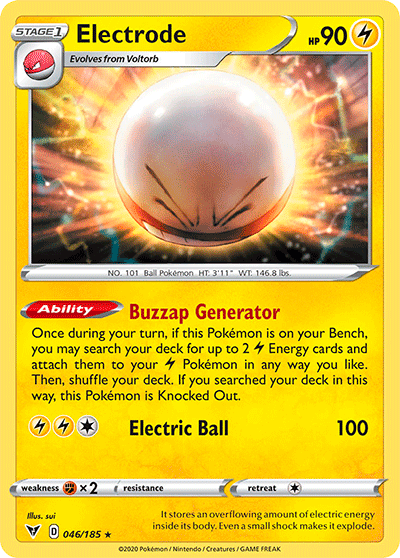 Electrode is a card I’m seeing almost no discussion about online, yet it has a ton of potential. Lightning Pokémon have been in a very good position lately and Electrode is another good boost to these decks. The biggest thing holding this card back right now is that fact that it gives up a prize for its ability to be used. However, this can be worked around using cards like Lt Surge’s Strategy and Reset Stamp which, when combined with the paralysis effect done by Raichu & Alolan Raichu GX can be worked around well. Electrode can also allow Boltund V to hit higher numbers out of nowhere right at the end of the game but will be difficult to incorporate into existing Pikachu & Zekrom decks because of a lack of a searching method. Because of this, Electrode will most likely be a main feature in whatever deck is playing it and could work well in a Green’s Exploration style of deck. One other avenue to use this card would be with Pikachu VMAX and trying to use it’s high hp to use multiple attacks. Overall, Buzzap Generator is a very powerful ability which has a lot of potential avenues to be used and should not be overlooked. 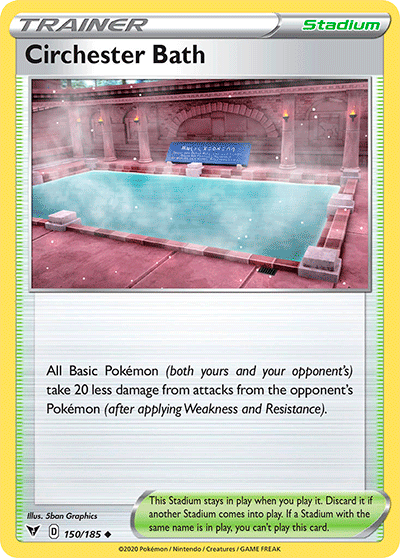 While TPCI missed an incredible opportunity to name this card “Champions Bath” this card is still worth looking at. The main home for this card I can see is in Lucario & Melmetal GX decks because those decks aren’t usually too concerned with how much damage they’re outputting, but mainly with how much damage is being dealt to them. This makes Chirchester Bath a strong inclusion in that deck and can be easily searched off Guzma & Hala which gains another target in this deck that will be discussed later. In the matchups such as Arceus & Dialga & Palkia GX/Zacian V which the Lucario & Melmetal GX decks damage output is important this card cannot be played and just be used as discard fodder. Overall, this is a neat effect which is unlikely to shake up the metagame but might provide a slight boost to an already strong archetype in Lucario & Melmetal GX. 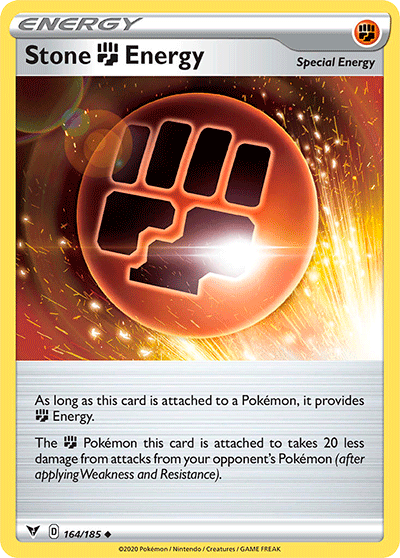 This special energy card seems to be made to synergize with Coalossal VMAX and does this well. Unfortunately, most other fighting type Pokémon we have right now benefit too much from damage resistance so this card will, for the time being, be at home in the Coalossal VMAX deck. In that deck it will be a strong player though, making the Coalossal VMAX difficult to knock out will be very important for that archetype and will boost its success rate. Expect to see 4 Stone Fighting Energy in that deck. 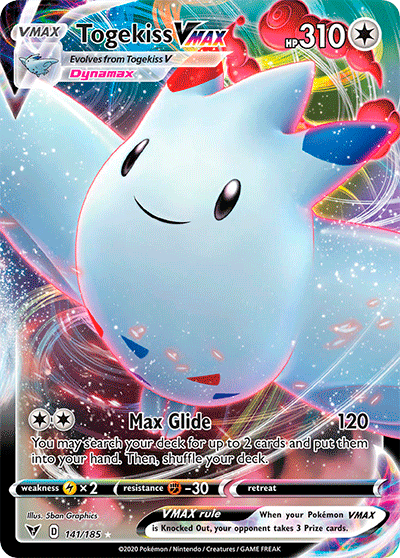 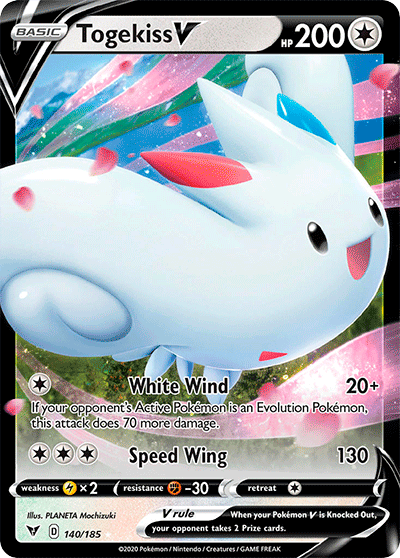 Togekiss VMAX is an extremely interesting card to look at. The effect of searching cards with an attack has been very strong and almost meta defining in the past with attacks such as Sylveon GXs Magical Ribbon and the Brilliant Flare attack on Charizard and Braixen GX. This attack is kind of a mesh between the two, only costing two colorless energy makes it easy to power up but only dealing 120 damage is a significant drawback. The fact that Togekiss VMAX requires colorless energy makes it incredibly versatile, being able to use multiple special energy cards such as Powerful Energy, Capture Energy and Weakness Guard Energy without their usual drawback of only providing a colorless energy gives a lot of different avenues to build a deck around this card. One aspect which this card is lacking isn’t really an aspect of the card itself, but more of the format. The trainer cards in the current format aren’t the strongest right now, so most games are decided by the individual strength of the Pokémon themselves. With Togekiss VMAX only dealing 120 damage for two attachments, it doesn’t really stack up to Zacian V or Eternatus VMAX. The effect of this attack is still extremely powerful and should be kept in the back of players’ minds with every new set of trainer cards that comes out. 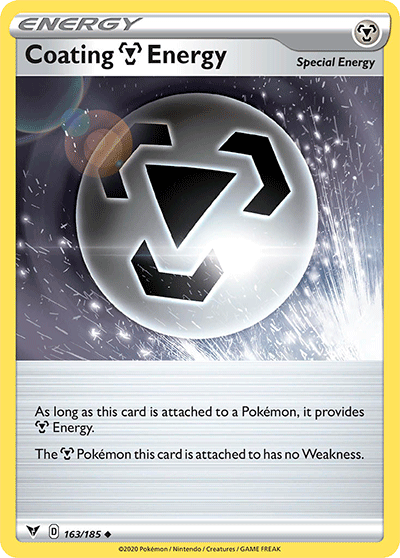 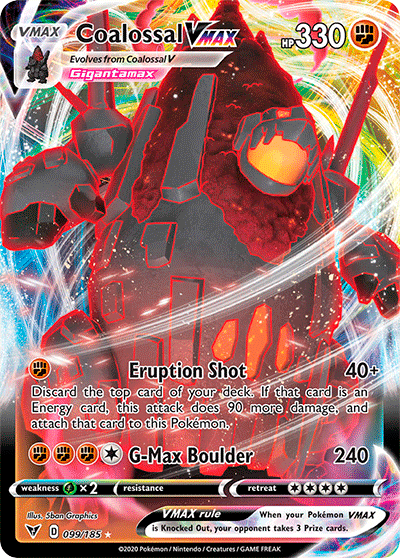 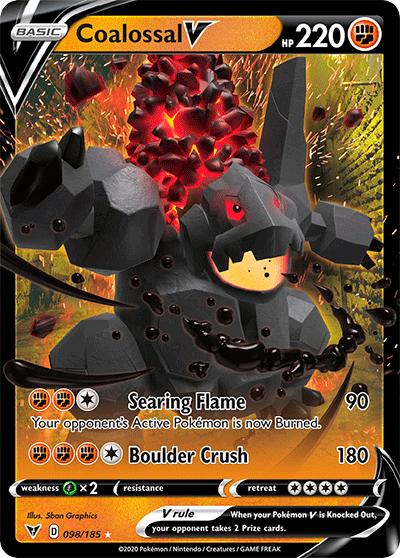 Coalossal VMAX is a card which will see play once Vivid Voltage becomes legal. Like I said before with Donphan, fighting is a very good type to be right now. Coalossal VMAX hits for weakness on Pikachu & Zekrom GX and on Eternatus VMAX while not being knocked out easily by either Pokémon. This card is very reminiscent of a previous card, Primal Groudon EX. Unlike Primal Groudon EX though, Coalossal VMAX has a very good one energy attack. Using Oranguru SSH and the new Jirachi along with a high energy count, gaining the bonus effect on Eruption Shot will be very consistent which can power up a Coalossal VMAX to use G-Max Boulder as soon as turn 3. Using the previously mentioned Stone Energy along with Buff Padding and Mallow & Lana can create a huge Coalossal VMAX which has to be dealt with in 3 or maybe even 4 attacks depending on how many Mallow & Lanas can be used. One issue which a Coalossal VMAX deck has is Zamazenta V. A normal Coalossal VMAX deck will have extreme issues with getting over a Zamazenta V because there Coalossal V is inefficient and Oranguru is not an effective attacker against metal decks. One counter which can be played to Zamazenta V is the new promo Galarian Sirfetch’d V. Even though Galarian Sirfetch’d V cannot one hit knockout a Zamazenta V it can be easily powered up with its ability Resolute Spear to move a ton of Fighting Energy or Stone Energy onto it. You can even use Mallow & Lana on the Galarian Sirfetch’d V and almost fully undo a single Assault Tackle from a Zamazenta V. One other factor which makes this deck strong is a lack of reliance on Dedenne GX or Crobat V. This is because all Coalossal VMAX needs to function is a few Pokémon and some energy. Even though this deck lacks those two support Pokémon, the consistency of this deck is still high. This deck’s consistency is boosted heavily by playing high counts of supporter cards, high counts of necessary Pokémon and one card which will be talked about right now… 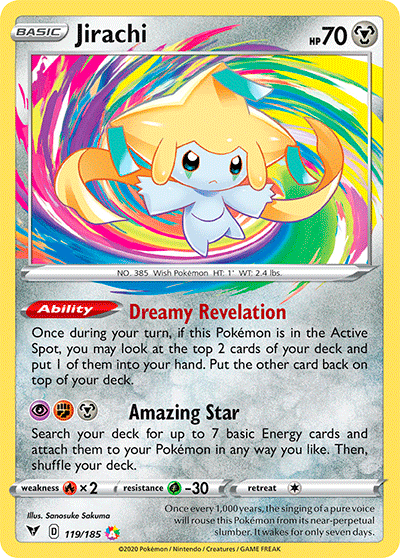 This will, in my opinion, be the most playable card from this set. A decent draw engine without using Dedenne GX or Crobat V is something we have sorely missed ever since the rotation of Escape Board which has locked Jirachi TEU away in the binder. With an ability like Air Mail from Pidgeotto TEU but on a basic Pokémon this time, Jirachi has significant competitive potential. Unlike the current state of the Stellar Wish Jirachi, this Jirachi gains one card into your hand without losing one because you can retreat it with Air Balloon without having to play Switch or Scoop Up Net. The weakest aspect of this card is that the other card is put back on the top of your deck, which makes each subsequent Jirachi use less powerful than the previous one. Even through it has that drawback, this card will still provide a decent draw engine. One deck I can see it immediately being played in is Coalossal VMAX, since that deck doesn’t need too many cards to function and absolutely cannot afford to bench Dedenne GX. While the attack text on this card is powerful, it has a ridiculously difficult energy cost and likely will never be used. Even though the attack is a little lackluster, the ability alone is enough to make Jirachi the most playable card from this set, giving the game a sorely missed consistency engine which doesn’t involve benching two prize Pokémon.
Overall, Vivid Voltage is probably not the most meta defining set of all time. However, the cards it contains have interesting and unique effects which is a nice breath of fresh air after knocking out two Dedenne GX for 6 prizes. I’m excited to see how this new format will shape up and how the metagame will adapt to this new expansion!
SHARE THIS POST
Previous Post
Next Post